The former Mayor of Kansas City, current top-ranking elected official AND faith leader shares his insight on a passing that has been marked throughout the world . . . 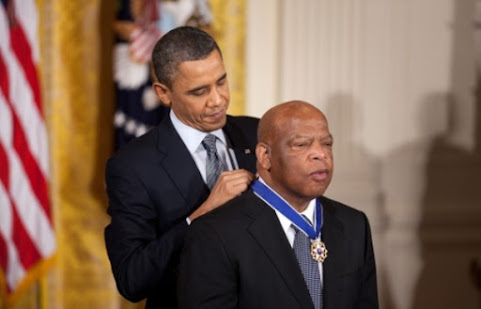 Rep. Cleaver’s Statement on the Passing of John Lewis

“Today is a deeply painful day. Not only for those of us who considered John a dear friend, but for an entire nation who saw him as the civil rights icon he was.

As I reflect on the extraordinary life of John Lewis and look back at the time when publicly promoting civil rights could get you killed, I am reminded of this quote from Genesis: "There were giants in the earth in those days.”

At a whopping 5'9”, John Lewis was one of the tallest. He never promoted himself, but then, a lion never needs to introduce himself as a lion.

I will never become so busy that I will not miss him. However, I will remain busy because the march toward true justice and equality for all—the same one he helped lead for over six decades—has not reached its final destination.

There are still many injustices to rectify and plenty of good trouble to make. While John will no longer be marching alongside us as we push this nation to fulfill the founding promise that all people are created equal, we will carry him in our hearts until we reach the promised land.

May John rest easy as the sun sets on his remarkable life, and may the world be forever grateful for his service to humanity.”

Thank you for posting this. There are several in KC who remember the leadership of Mr. Louis as he helped transition the community past the civil rights movement. He is truly an American legend.

that's true but actually, I think TKC should cut this one off from comments too. A lot of the racist trolls don't have anything productive to say. They haven't accomplished anything with their lives so they must reveal their shortcomings to everyone else. Sad.

There is room for debate. Some might not agree with an elected official's "legacy" and they should have a right to speak out.

Yes, there might be some garbage, we are talking about politics after all. But hidden in the muck, there's always some ration AND critical statements that at least deserve consideration. That is what free speech is all about! That's why I still read this dumb blog after all these years.

The nanny-scolds are out early on this one I see, cluck-clucking and clutching their pearls that someone might say something RACIST about Saint John Lewis.

I feel the same about Lewis' passing as Dems would feel about Trump's passing.

The man was involved in a couple walks way back when, other than that he did nothing for his constituents, sad but true.

I bet the man is cringing in his coffin at the thought that the cleave spoke about him, nobody wants the cleave to say anything about them because he is that stupid.

Besides, this is the only way the cleave can get any attention because nobody likes him or wants to be around him.

Maybe erect a thug proof statue and set it in the middle of the Plaza.

He dined out on his being hit on the head for 50 years. He called mcCain a racist, boycotted Bush and trump swearing in. He was all about race and never had an original thought.

Oh my! Jake, you must be aghast as the venom shown here.

Race-hustler who marched across a bridge in Selma, Alabama. Returned year after year for photo ops with a virtue-signalling entourage. Selma ? Selma is the poorest city in Alabama and the ninth poorest city in the US. Gee, I wonder why ?

For a systematically racist country, there sure are a lot of negroes in high places. Weird

He waited nearly 24 hours and until he was finished golfing before tweeting the bare minimum thoughts and prayers.

He then ordered flags at half staff for a day, which is about 3/5 the normal time.

Funny, Obama golfing was never a problem. Who was prez when felon Mikey Brown fought the law and the law won?

But, but, but, whatabout OBAMA!!

Except Obama never made a campaign pledge to not play golf, didn't repeatedly mock other presidents at campaign rallies for playing golf, claim he would be too busy working as president to play, play rounds during a national crisis, or travel to his own golf clubs and bill the government to pay his family businesses for the outings. Trump has cost taxpayers $180 million for his golfing in NJ, Virginia, Florida, and Scotland.

Other than that, sure it's exactly the same... moron.