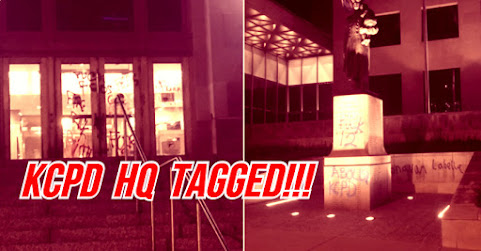 Today's pause in posting wasn't just to focus on video games personal wellness, we needed to wait a beat and witness out the aftermath of last night's protest on KCPD HQ played out.

First and foremost, the response from the Mayor drew both criticism and widespread support . . . Here's his social media reaction that dominates discussion of the incident . . .

"I went downtown last night and was disappointed to see the efforts by folks working their hardest to distort and distract.

"Defacing a monument to police officers killed in duty, tearing up public buildings that our primarily black employees are cleaning the next day, throwing explosives at a door to intimidate the lady working by the door at night... None of those actions tell this black man you care about me or my family’s struggle. None of it tells me you’re trying to make change beyond some video views in a night.

"I’ve worked hard each day to make and carry change to fruition. It may not be big enough or fast enough for some but I’ll be damned if I’ll let fake—primarily non-black—allies like those out last night claim some moral high ground.

"I know we’ve got work to do. We’ll keep doing it. But, our lives and our struggle aren’t a stage for clicks.

"And looking at who has been around me each time we are trying to make positive change, I know vandals are in it for themselves, their attention, centering their view of the world, and sure as hell aren’t in it to make life for my family or my people any better.

"If you’re about a movement, be about the people you’re fighting for. If you’re about a fad, violence, acting a fool, or having something to do one summer while the rest of us face issues for a lifetime, please just go somewhere else."

WAS THE MAYOR'S REACTION AGAINST PROTESTERS EFFECTIVE?!??!

TKC believes that some response against the actions of "allies" was required yet local leaders have been hesitant to take on this contingent.

Here's a collection of round-up conversation and news as this conflict resonates across the nation . . .

KCTV5: Charges filed after officer's hand is slammed in door at KCPD headquarters

Let's get it cleaned up and move on!

Cleaned up. YES. Move on? Not until we see what the penalties will be.

I'm glad the mayor is saying something now. But he has to realize that he encouraged a lot of this when he got on his knees with protesters and caved to their demands.

Lucas is so naive that he thought that once he knelt and bowed to the initial "demands" of the uninformed mob, they would then try to learn enough to be able to actually take part in any serious discussions about moving forward on the issues at hand.
"Activists" have to have demands to confer whatever legitimacy they may imagine on themselves and to keep the red lights on the TV cameras on.
So the demands never stop. They just continue to become more and more extreme.
As does the behavior of the mob.
Lucas' cowardice and cluelessness has created a descent into lawlessness that is already spinning out of control and affecting residents and businesses throughout KCMO.
And the police are not going to risk their careers when it's clear that legitimate necessary action on their part is going to generate false accusations and that will not have the backing and support of elected and appointed officials.
Things will now only get worse.

It was great seeing trash can lawyer Stacy Shaw at the front promoting herself... I mean protesting injustice last night.
Every 30 seconds on her megaphone "I am attorney Stacy Shaw"

Nah. Mayor McDrinkerson's incompetent and flailing. He should resign, as he has no ideas and no leadership ability. He should find a career where he can take more selfies.

Try this stuff in Lawrence and you will be going to jail for 5 years. Douglas County judges aren't as liberal as their KC counterparts.

He's lecturing antifa wannabes. What a waste of time. God forbid they ever send they varsity squad here. Clueless Q won't know wtf to do. Whatever cleave and frank tell him to, just like always.

I thought he said they were non - black primates.

Mayor Selfie is accusing others of seeking clicks and video views? What a hypocrite. We need a mayor that has credibility but instead we have a chickenshit clown face.

Lucas seems to have taken a different tone now since it's buildings downtown getting damaged. Now he denounces probably the same protesters he was kneeling with what two weeks ago? It's funny now that the Feds are coming or already here to get in the middle of it Lucas is speaking different words and and taking a different stance while Baker appears to be stepping up to do the job she was elected to do. Or is she simply trying to look good here right before election time?

So mayor mcdrinkerson is saying that only black people can get away with whatever they want, white people aren’t allowed the same forgiveness that the blacks get.

Mayor mckneely reveals himself more and more everyday as the racist jackass he really is.

This is our mayor on crack!

Nope Q Ball! You can't have it both ways. You picked your side and encouraged this on the plaza. You came out against your own police and aren't going to be able to put that genie back in the bottle. Race-baiting is akin to being pregnant. Either you are or you aren't. You sir are a racist slimeball in an expensive suit. Sucks to be you!

You forgot one thing though super Dave, the feds are here because of her and her non existent prosecutor skills. That’s why she was pushed out as leader of the Missouri Democrat party. Even they know how stupid and worthless she is. It’s embarrassing really.

there needs to be more than just one charge here.

But just like every other protest in America. Interesting to see that the guy charged with assaulting a cop didn't even live in KC.

Well that's one that didn't live here. Explain the rest of the goon squad.

wow! the mayor is speaking the truth. horrah!

Stay in lawerence. Do not come to kc only to destroy it!

The primarily non-white allies were all lead by the very non-white Stacey Shaw!!!!! It’s funny he won’t place the blame where it belongs!!!!

TAGGING? That's what you call it, you ignorant fuck? It's malicious vandalism. How about we come over and tag your mommy's house with a molotov cocktail?

Those negroes ought to be shot in the head.

HOW'S PRAIRIE VILLAGE TONIGHT STUPOR DUCK? YOU GOT ANY COMMENTS ABOUT PHILADELPHIA OR SAN ANTONIO? YOU DON'T FUCKING LIVE THERE EITHER.

I liked Mayor Lucas comments except he seemed to only be bothered by the fact they were mostly white protesters. Kind of a confusing message.

Regardless of ethnicity; protesters should not be vandalizing buildings, burning, spraypainting, looting and injuring others or they should be arrested.

Freedom of Speech means peaceful assembly; not destruction and anarchy.

It is concerning the KCPD are afraid to protect even their own headquarters for fear of media and elected official reprisals.

With this mindset, will KCPD protect the average Joe's family and home if they are called for assistance due to an angry mob of protesters?

The FOP president said it best:

You make me sick. Your empty lies and promises will NEVER be forgiven. You turned your back on us when windows were broken, buildings were painted and our members were violently assaulted. You changed rules to make it look like our members were the ones at fault. You chose your words and actions.

Tonight a statue was painted over. It won’t mean anything to you. They are just names. To me, and to my brothers and sisters, that statue is sacred. I was there when some of those heroes died. I will carry that pain the rest of my life. Those names represent 119 brave souls who died standing the line when you didn’t have the guts to.

The families of those who gave all deserved better than you gave them. You have no right to say anything to them now. You helped lead this charge.

This isn’t about any single person or even group of people. This is to every single person who should have stood with right, and against wrong. To those who had a responsibility to be different, but failed.

A friend put this quote on my desk this week. “Carry the battle to them. Don't let them bring it to you. Put them on the defensive and don't ever apologize for anything.” Harry S Truman

You didn’t just fail our family, you failed the hundreds of thousands of people who live here and expect you to help protect them.

You make me sick, but you won’t really give a shit.

You said it plain as day. He doesn't know what he is doing. Anyone who kneels for those assholes should not be in office.

It sucks to be a cop to. They get no help from their government He is a racist towards white people.

You don't have to come to Kansas city to destroy it. Tjeblacks have been destroying it for years. They don't n6any outside help.

That was great. Our police are like family. You do your job. Don't be scared if you have to shot some asshole for breaking the law. My dad always said that he would rather be judged by 12 than carried by 6. Amen to our police forces across America.

In the words of NWA, Fuck the Police!

Is he really this naive? He is so bent on being liked by everyone he will say anything to anyone and hope it sticks. He tried to act outraged by the desecration of the statue in front of police headquarters. He fooled no one.

PARDON ME, MAYOR QUAGMIRE, BUT YOUR RACISM IS SHOWING!

"public buildings that our primarily black employees are cleaning the next day" --- Why mention the race of the custodial staff?

"None of those actions tell this black man you care about me or my family’s struggle." --- Said the Mayor who's paid $145,000/year with taxpayer dollars, with no loss of income from the coronavirus.

Quinton- What about the looting of the jewelry store on the Plaza? Hundred plus in and out of the store, looting and vandalizing, didn't look like outsiders to most...

Boy Blunder just discovered that if you lay down with dogs you are bound to get fleas.

Don’t worry people Stacey Shaw was there to protect the protesters from the police! Hahahahaha!

Serious question, doesn’t this make her a partner in the crime?

it's beginning to ressemble the movie the purge.

but the lawlessness in the movie lasts only twelve hours.

here, it's starting to seem permanent.