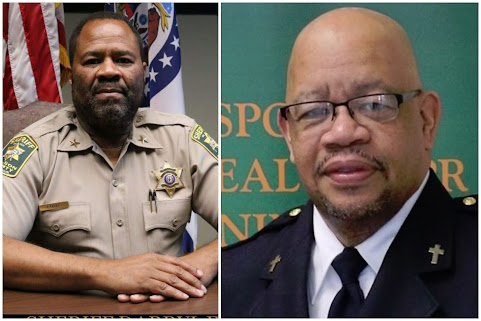 Recent American civil unrest and nationwide demand for a crackdown against police brutality have placed historic pressure on law enforcement. In times of stress many of us turn to our faith . . . HOWEVER, the election season and ongoing controversy have complicated prayers for Jackson County.

At the outset of this discussion, let's remind our blog community that political opinions are subjective but to ignore rampant complaints is to deny the right of local voters to voice their concerns.

Let's not forget that even the top law enforcement officer in KCMO complained of a hit to morale amid the current wave of protest. And so, it's clear that criticism from outside and within law enforcement has been making an impact . . . At the risk of granting too much power to trolls, we must realize that we're all human and words can hurt.

To that end, we notice a sense of betrayal from law enforcement regarding the Jackson County Sheriff who has been on record alleging corruption and racism against his colleagues

“Some of the things going on with the Sheriff's office is because I’m a black male telling telling them what to do and they’re not accustom to it,” Sheriff Forté said in a recent Fox4 interview.

And so this criticism leads us to a message sent our way which attempt to unpack the intricate politics of police reform at the crux of an upcoming August Primary.

"There is great distrust of the current administration. The evidence for this is not hard to find either. The Sheriff has made numerous social media posts that put down and ostracized the current staff. He is throwing his own people to the wolves in a time that they need actual leadership and support.

"The support staff he has appointed is just as bad. The “in-house” Chaplin has made numerous, public accessible, FB posts about his distrust in the police as a whole. This is the man that has been placed in his position to provide first line mental health care to deputies. If he openly criticizes law enforcement on a public platform, why would any officer/ deputy go to him for help with anything?"

The chaplain referenced is Anthony Shawn Baker who has, in fact, posted criticism of police, president Trump and law enforcement brutality . . . But to be fair, he also posts some centrist memes and content that seems to encourage unity among law enforcement officials against racism.

I'd rather there is fighting for reform among police than any fighting targeting he public.


Most would rather police just solved more crimes, busted more criminals and protected our neighborhoods.

Forte is doing a terrible job as sheriff that’s why he’s playing the race card, always the race card with those people. He knows sharp is well liked throughout Jackson county by the voters and his gravy train is slipping away. Maybe he should continue with that law degree he said he was gonna get.

We need a war pope.

I’m sure people resent Forte telling them what to do because he is stupid, not because he is black. Forte is a completely dumb motherfucker.

So forte is blaming the people hating on the popo because he’s black and the white deputies wont listen to him?

Get rid of this idiot fast.

Who ever this Chaplin is - he’s better than John Modest Miles who should be prosecuted to the fullest extent of the law for his involvement with East Patrol - and Forte, too. The is good, evidence-based reason to distrust police. KCPD and Jackson County Sherriff’s are not worthy of trust. Their mismanagement of pretty much everything basic to their service is fraught with fraud, corruption, collusion and bad faith. Truth doesn’t mean contention - it means, there is a basic level, a starting point, of where the conversation needs to begin.

When your chain of command speaks about you in a defamatory manner, it’s time to leave. It’s obvious this city will not back up the police. Why the police are even bothering to serve this pathetic city is amazing
You cops have come to the point of decision. Either leave, or any crap dumped on you by your own department is because you must like the abuse
Your call

When has Forte not fucked up 100% of what he touches? Malignant hobo-lookin' incompetent running the diversity hire's playbook right down the middle.

Pension is the only reason cops are trying to tuff this out. Fucking pandemic won't make the bullshit go away, wonder what will?

No Sheriff Forte it isn't because you're a black male telling telling them what to do. It's because they know an idiot when they see one.


Hey sheriff Forte after what your people have done can you blame them? I sure as hell wouldn't take orders from you!!!!!

For DARRYLICOUS to accuse anyone of corruption and racism is nothing more than a case of the pot calling the kettle black.

"The Sheriff has made numerous social media posts that put down and ostracized the current staff."

Link to one. ONE.

Because I know you can't.

"@sheriffforte: "Why would anyone trust and respect @JCSheriffOffice when unreported, known wide spread internal theft, favoritism, sexual harassment and discrimination was commonplace? I respectfully ask for your patience as we earn your trust and respect. We’re trying! @JacksonCountyMO @KCMO""

Hey tough guy. Where’s your response? Just what I thought. Thanks 10:09.