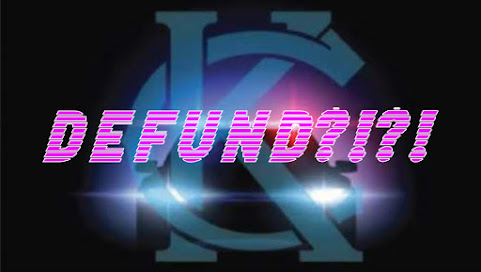 Quick note for late night denizens of the discourse . . . Cowtown media doesn't seem to think there's much support for it but take a close look at Kansas City protesters and notice more and more signs to defund the police.

In 9 consecutive days of protest throughout Kansas City we've seen the conversation move beyond demands for "local control" and grow more strident in an instance that police shouldn't exist at all.

Here's some background and something to consider for the late night:


There's a growing call to defund the police. Here's what it means

Instead of funding a police department, a sizable chunk of a city's budget is invested in communities, especially marginalized ones where much of the policing occurs.

Rep. Alexandria Ocasio-Cortez threw her weight behind a growing movement to defund police departments that' has become a rallying cry for some protesters in the wake of George Floyd's death. The progressive firebrand put her stamp of approval on the far-left demand as a policy solution to combat police brutality and racial injustice during a congressional primary debate that aired Friday night on NY1.


The movement to defund police is based on nothing but lies

General rule for riots: They begin as protests that have an actual point but then descend into madness. Not only did the orgiastic masses do major long-term damage to the economic prospects of their own communities by rioting in cities across the country, not only did they shout angrily in tightly massed crowds as if they were actively trying to jump-start the coronavirus, but even the supposed thought leaders behind the riots were making radical and destructive policy proposals.


Here's where the movement to defund police is gaining momentum

For indispensable reporting on the coronavirus crisis and more, subscribe to Mother Jones' newsletters. In Nashville, Tennessee on Tuesday, resident after masked resident lined up outside a public hearing on the city's budget. They waited, in some cases for hours, for their turn to share the same message with the city council: it was time to defund the police.


Listen: Would Defunding the Police Make Us Safer?

Hamblin: There are demands about defunding police. That seems like a far cry from where we are. Are there concrete things that people are asking for? Vitale: There's kind of a continuum for understanding what defined the police means and it doesn't really mean that tomorrow the police budget is zero.

And all of this inspires our playlist for tonight featuring songs from The Police given that we could be witnessing the last breath for American law enforcement as we know it . . .

Defund would be a disaster.

But I'm sure KC would vote for it in a heartbeat at this point.

Local control is not going to happen. This city’s corruption is too great to have the council in charge of KCPD. Can you imagine such mental giants as Jermaine Reed or Teresa Loar running our force?
Defunding won’t happen either. BLM needs to get realistic or prepare for disappointment.
AOC is an IDIOT.

There is no way local control is going to happen. The FOP is too powerful. This red state will follow police long before they follow those who have been looting, ending ordinances and defunding police. The rest of this is just noise. Should have tried to do it without attacking police.

Actually, it’s never really been tested
Tommorow give the entire police force the month off
Then let’s see what the results are
But we all know it’s not going to happen because even the idiot democrats that run the cities where these clown protesters are demanding it know full well that they will be blamed when the gangs take over the city

Everyone had to be on lockdown, let the police go on lockdown for two weeks and of course pay them. They deserve a vacation and the Mayor and City Council take care of any issues.

I never thought I’d do it, but I went and purchased a firearm this past week - to keep at home and maybe carry for protection.
Going to get formal training on proper care/use/safety/legal next week.

Ok commenters, let’s be a little less dramatic. Redirecting money away from police services to things that really can make the city safer is not a bad idea. Yes you would have to keep some police for emergency response but many of the components of the department could be eliminated. We also need to demilitarize the department. This was a very bad idea.

The police are protecting the protest. Without them there would surely be some radical right wingers out there that would unleash violence on protests. Once laws are abolished the one with the most guns comes to power.

Militarization of the police is an unfortunate but completely predictable and necessary result of allowing every jagoff in the US to own high powered and high capacity firearms.

Barney Fife with a six shooter just isn't going to cut it with today's criminals.

Is everyone ignorant of who the police confront on a daily basis? They encounter scum of the earth violent criminals, majority of them black. They do not drag people out of church to abuse! They are called upon!

Most time the police are responding to 911 calls from a community that inturn will so eagerly criticize and second guess the cops for doing their jobs that they themselves requested. These people have long criminal records of which the media will never report if the police encounter goes badly.

Blacks do not get enough love from non whites for a number of valid and non valid reasons. First you have to love yourselves. It's obvious the systemic racism is not within the police department but within the the black culture, pitted against itself. No amount of protesting is going to change that. No amount of white change will solve the wholesale black slaughter of blacks at the hands of other blacks. Brotherly love does not exist in the black culture as shown by the data and numbers of daily death counts Nationwide. Acknowledge the true enemy.

Straight up hatred and propaganda.

Thankfully, nobody gives a shit.

Complete waste of time. This is nothing but noise and those starting this initiative know it. There are only two paths to local control. A state wide ballot initiative (which will cost over 2 million to collect enough signatures throughout the state) or direct legislative action. Since these activists can’t raise the money to collect signatures the only realistic path is through the legislature. They have no lobbyists nor do they have the money to hire one. The police union probably has more money than these idiots will ever have. They probably have 2,000 members and a huge community behind them to fight this. Police have been in the statehouse for decades and have longstanding relationships.

This is just noise, and in the end they should be trying to work together for change.

4:48 AM. "Straight up hatred and propaganda."
Please point to any words of hatred.

To a leftist, reality is hateful. That is why every time they take power they destroy their civilization and then murder the people who oppose their acts. They cannot deal with reality and lash out at all the haters and the anti-revolutionaries. They are completely irrational.

"Leftists destroy their civilization" @8:14?
You mean leftists like those who fought in the Revolution?

Or those who fought and died to defeat the Southern Traitors who tried to destroy this Country?

Or those who built the standard of Living you (and not just the Wealthy) enjoy?

Or those who died in two World Wars to defend the "Four Freedoms"?

Or those who led us to the Moon?

Wake up dipshit, every advance this Country has made so far was accomplished by what you call "leftists", and done in spite of the cowardly "conservatives" squealing and screaming about how "things were going to Hell" just like you are doing now!

Nothing but political theater to keep the blacks on the plantation. After the election there will be nary a peep about it.

Blacks and white women are being proven to be the easiest demographics to manipulate and control.

838 Nice try. None of what you claim was done by leftist.

The "leftists' of yesteryear would be run out of today's Dem party, terminated, and gang assaulted at at any leftist protest today.

Everything you list was created by white men - who are demonized by leftist Today.

Name one leftist who was in power 20 years ago whose policies back then would be welcome in today's left.

What you list was done by people who would not be considered leftist today.

20 years ago biden was against immigration,wanted a wall, wanted welfare reform, thought blacks were criminals, was against late term abortions and gay marriage...sure there is more.

8:38 AM. You dare to compare noble, righteous causes and accomplishments with these destructive mob movements? These are emotiional, baseless, factless tantrums of children encouraged and manipulated by opportunist and false narratives.

Your premise is flawed.
This is a movement of agitated weak minds, a movement basically because whites just don't love blacks enough. Random interviews reveal that we should all do this, we should all feel that. Think and feel different toward black people and if you don't we will stamp our feet and tear it all down.

Love, approval, self-esteem all begin at home and in the culture. The black community is essentially Fatherless and leaderless with no cohesiveness as family units. The facts and data show blacks are killing each other at an alarming rate outpacing all other races by a very large margin. The answer is not within these frustrated, emotionally triggered movements but within the culture itself. At least do the research that identifies the true causes and sources of the void black people experience.

What do you honestly think would happen if a police department got defunded?

Protection rackets and organized gangs wouldn't take over? Well, I guess the social workers could talk to them.

Anyone with means would throw up walls and have heavily armed private security. Please see South Africa.

Time to start from scratch and build something better.

Here's an example: Ditch the para-military, stormtrooper look and adapt athletic wear with logos. Ditch the macho, expensive SUV toys and replace them with Ford Fiestas or mopeds.

Oh, and personality tests and personnel practices to weed out fascist bullies quickly.

Pusswhimps. Don't be criminals. See his easy that is.

Help me understand how a culture that kills for sneakers, glorifies thugs as role models, sees nothing at a crime (even murder) scene is going to police themselves.

Do they actually hate the police, authority and themselves so much that they really think this an option to defund the police?

Sounds like criminal thinking fueled by exaggerated claims of racism merged into a movement.

Not about policing or crime control - it's about controlling the money and siphoning it off and directing it to your party, friends, donors and self.

Most cities are broke because of poor management topped off by corona.

Therefore, DEFUND will likely happen. Personnel, luxury equipment like big SUVs, and military materiel will all be cut way back.

If they're defunded, does that mean there won't be any more speeding tickets?

dummy, that's a profit-making line of business for cities.