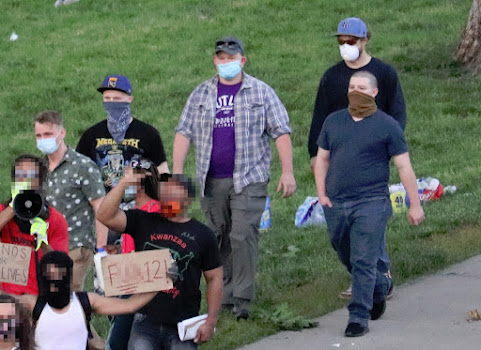 It's hard not to notice the lack of diversity in this photo and no apparent support for the cause among this collection of yokels.

To be fair, there has been a lot of speculation about the identity of violent protesters.

CBS: President Trump suggests without evidence 75-year-old man shoved to the ground by Buffalo police was a "set up"

New York Times: Many Claim Extremists Are Sparking Protest Violence. But Which Extremists?

^^^ Trash no matter who they are if it turns out they really did burn that car.

@5:27 - Don't forget that most skinheads are NON-RACIST and a lot of them are black. Don't lump these lumpy bitches in with them.

Burning cars just to get laid.

Blame whitey during a blm and Antifa riot.... makes perfect sense in the despicable dimwit world.

Next thing you know they're gonna say that they are Russian.

Well it'd be the black guys in front, right? Why are their faces blurred out? They're the suspects, right? All black people are criminals, right? They commit a majority of crime, right? They're bad, right? That's what TKC readers always say, right?

Der Fuhrer obsesses about Antifa because he's a fascist.

The FBI statistics often cited here speak for themselves. Not all blacks, no. But the stats are inarguable, sad, and troubling as they are clear about who is responsible for crime.

Is the Playza an autonomous zone yet ? Seattle has one why not KC ? F_^king children.

Wierd they are actually white and were just there to burn, not to help BLM.

But they may have been the right wing assholes throwing water from the back so that the cops would gleefully riot against the peaceful BLM people in the front.

Oh so now the KCPD heroes are liars? Fuck you Nazi cop hater.

Good idea from an asshole. Have there been any police riots in an autonomous zone yet?

Well, looky there Cletus. White, skinhead inbreds created the violent cop car destruction. They gonna catch these crackerhead MAGATS and throw away the key. Probably from JOCO, too. Spoiled snowflakes wanted to come and create mayhem in KCMO but we see their evil thug ways. Buh-bye Deplorables!

Looks like the Jr Klan members and their daddy came up from Raymore for some Jack Stack on the Plaza and Buddies on Main.

Notice they weren’t arrested. There are other videos online where the guy in the royals hat switched to a St. Louis hat and carrying a weapon. Again, not arrested.

Not that you've jumped to conclusions or anything.

Why are they even looking? Jean Peters Baker will decline to charge them.

Have they looked at all the KFC joints? Those boys look like they eat a lot of starch and fat.

White guys all look the same to me.

Don’t blame them, they were just trying to earn their BLM merit badge.

they look like missoura troublemakers or henchmen impersonating such.

it would be a surprise if they were civil disobedience aware blm protestors.