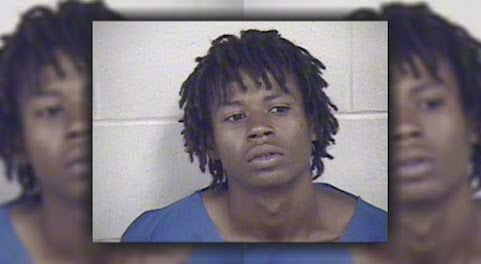 Special thanks to our best & brightest readers who offer a preview of what could be a controversial upcoming event . . .

For those who don't remember, Fredrick Demond Scott is accused of killing 5 white dudes in South Kansas City parks and a reported outburst in school wherein he allegedly exclaimed "Kill All White People" evoked anger from newsreaders across the metro.

THE WEEK SUPPORTERS OF KANSAS CITY #BLACKLIVESMATTER WILL RALLY TO LEARN OF HIS WHEREABOUTS & THE STATUS OF HIS CASE!!!

Here's the BLM social media invite and just a few people interested in arguing on behalf of a suspected serial killer . . .

TKC EXCLUSIVE: It's important to emphasize that NOT ALL supporters of #BlackLivesMatter are "enthusiastic" about this protest, low turnout is expected, and this conversational advocacy has been a point of contention among the group.

And so . . . The social justice debate continues and now starts to touch on Kansas City's racially charged history of deadly violence.

they are entitled to ask questions. He is innocent until proven guilty. The story has a lot of holes in it. The media did not report that the suspect has special needs and might not be competent to stand trial.

But he is also guaranteed a "speedy" trial by the constitution. So we need to get on with. He is competent to stand trial and he needs to finally face justice.

If guilty, this should be a capital punishment case.

He's on video following the suspect.

Not somebody worth advocating for.

BLM is so stupid. Don’t they know Jean Petersucker Baker is the best friend a black criminal ever had?

Yeah he has special needs- he needs all white people dead!

How many years ago was this? Petersucker is so damn worthless it’s not even funny, hell, I bet this racist piece of shit gets off free because she’s an effing dumbass. This freak admitted he killed them and wanted to kill more.

I thought we were told that only non blacks are Racist ? Amazing how many people rally around evil. Hitler , Mao and Manson had their followers as well. Welcome to fitting in with them.

He was just turning his life around ... and then he started hearing voices in his head.

Jackson County Prosecutor, Chair of the MO Democratic Party, and Chief Panderer to BLM Protestors, Jean Paters Baker, declines to prosecute Mr. Scott, citing that he had also stalked victims on the KS side of the state-line thereby qualifying as a (Bi-) protected class!!!

At this point , Only the guy with a purple man bun is buying into the poor me shit.

City leaders propose erecting a statue to honor the late Rayshard Brooks. Saint Brooks had the following rap sheet (see below), before his recent DUI, resisting arrest, assault on police officer X 2, fleeing/eluding, theft, assault with a deadly weapon.
---
The following are all recorded in Georgia courts.


yet again...racist police arrest man for "Murdering while black"

11:18 ^^ sure you haven't confused this guy with the arrest records of George Floyd ?

Correct me if I am wrong but left out was on probation from prison.

they are still doing the right thing.

He is entitled to a fair trial. Those of you who do not think so are unAmerican.
The constitution says that police are not judge, jury and executioner. If that's what you support, then you don't believe in American values.

Everyone needs a cause. Do they think this guys was falsely accused? Or is this a crime of poverty which he could be pardoned for?

A lot of people say he was set up.

He deserves his day in court.

11:18 the police obstruction and marijuana charges are fluff. The theft charges and battery charges are the most serious of the list; and you dont need to live a perfect life to NOT be shot in the back by police. It doesn’t matter what he did, he shouldn’t be dead now. He past isn’t his present and every day we get to start a new day with a fresh start. What is the point you’re trying to make?

He had a lot of experience being arrested. He should have known not to resist.

1:13 his victims families won’t get a fair trial, this racist pig deserves to die for his crimes but Petersucker will let him off because he’s black. She’s the sole reason this thing has drug out and has extended the families pain, what is she waiting for? Does she think people will forget and she’ll let him go because it took to long? This is how murderers in Jackson county get out of jail with time served. She thinks two to three years waiting for trial for murder is good enough. Petersucker is a worthless cunt who’s let many many families down because she’s stupid.

This is just the latest example of the desperate need of "activists" and mobs to constantly create new causes and demands.
So the causes and demands constantly become more extreme and outrageous.
But if you're an "activist" craving attention, media interviews, being slobbered over by pandering politicos, and social media celebrity, having all your demands met plunges you into the obscurity you deserve.
Peters-Baker, Lucas, and the rest of the local cowards who think that giving these folks a little something will make them go away are finding out that the monster they've created will end up destroying them as well.
Those who try to try the back of the tiger often end up inside.

1:13 has to be Byron, only Byron states stupidity like that. The guy had his 3 strikes. Time to rid society of your innocent pal. Don't worry , KC is filled with career criminals you can mourn.

"this could be my son " - Obuma the great divider . Perhaps like many, he doesn't know how many he spawned. Stay tune for reports of the latest kid shot, recent news features of the high crime in 18 th and Vine and the latest murder by the Paseo. Yes, all these could be your kid.

A cell awaits at the zoo in Jefferson City - life, no parole, maybe death penalty. All of that assuming guilty, of course.

KILL ALL WHITE PEOPLE is that racist

Another murder over night and a murder suicide up north, we got so many murders right now I lost count, is this 90 now?

^^why are you counting retard? Is your life that pathetic? You don't have anything else to do?

Driving while intoxicated, resisting arrest, throwing punches at the officers, taking their Taser, shooting the Taser at one of them (which the DA said was a deadly weapon not long ago and now says it isn't) to incapacitate him and then who knows what happens -- if you wanted to screw up your life, you couldn't put together a much better list.

As long as they're not raiding the bank account that'd be alright.

If you cook well enough and clean his crappy drawers all the time what more could a guy want.

Most women fix themselves up some with the help of another and do the leaving, not the way that happened here. Some guys do want freedom though - might have to let that one go eventually.