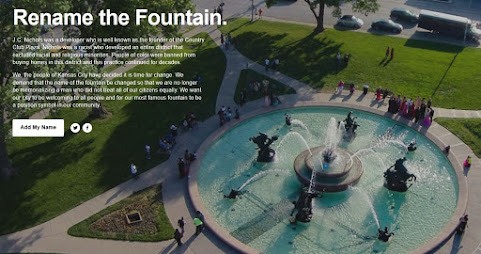 Global economic predictions are dire as the pandemic continues along with protest against police brutality and social injustice.

A scary headline that recently captured our attention:

Luckily, this blog is all about viewing the news through an alternative lens and maybe even finding a bright side to share with so many angry, keyboard warriors.

KANSAS CITY BIZ EMERGES DEDICATED TO THE FIGHT AGAINST RACISM!!!

Sure, The Plaza is never going to recover the the damage of the riots and horrific property devaluations but new biz in the social media era seeks to profit by way of selling idea without the cheap merch manufactured in China.

Locals hustling to connect their biz to the struggle for social justice are in the midst of a Renaissance.

Whilst protest and riots started a couple of weeks ago . . . Many progressive journalists encouraged patronage of African-American owned biz and started this trend. HOWEVER, the only problem was that so many of those places are traditionally conservative and merely seek to turn a profit in their respective endeavors - Not change the world.

A new brand of local biz has emerged which seeks patronage to directly combat local racism. Right now the market is seemingly limitless, recently millions of bucks were mistakenly raised for a Black Lives Matter group not associated with movement. However, for those with open hearts, minds and wallets . . . Handing over a few bucks for ANY cause will purchase peace of mind along with a great story to inflict on friends & family.

And so these news items offer a peek at the rapidly changing marketplace of ideas . . .

KANSAS CITY, Mo. - As Black Lives Matter protests continue across the country, people in Kansas City want to keep the conversation about social issues going. Two people, along with their friends are doing that by setting up what they call a privilege walk in Hyde Park.

KANSAS CITY, MO (KCTV) - There are those special moments, like a child's first catch or a ride on the swing set. These are the memories families have cherished at Swope Park for decades. For Erik Stafford, a visit to the swimming pool was the highlight of summer.

KANSAS CITY, Mo. - Bakers Against Racism KC sold over 1,200 pastries. Proceeds from the sale go to the Urban League of Greater Kansas City. The group hopes to help minorities in the community secure economic self-reliance and civil rights. They partnered with local bakeries and restaurants .

Always thought those crime tours in KC and all over the country were also in bad taste. Like they were celebrating people's misery and all of the hardship that as involved in that time.

Well, all of this sounds like a lot more fun and far more educational than the parade of home tour. Probably less money too considering that nobody wants to buy a half million dollar McMansion right now.

True. They should sell merch and that way the patrons can have some thing they can use to prove they're down with the cause.

I do respect the game. Capitalism always finds a way!

Having some government edict change people's upbringing, experiences, attitudes, and behavior is not only fanciful, but very much derives its basis from totalitarian "thought police" philosophies and societies.
And, of course, it actually changes nothing.
The notion that EVERYONE in the country is a racist, a view that was expressed just yesterday in Senate testimony, is ridiculous on it face. Now we have racism, bias, privilege, unconscious racism, and an ever-expanding definition of victimization and put-upon identity groupos.
All making believe they just want equality and diversity, but each actually looking for special treatment and benefits.
KCMO can address its "implicit racism" issue this way by Lucas simply making one of his ponderous self-important speeches declaring any such attitudes removed from the city's residents by edict.
There, that wasn't so difficult.
Now please fix the streets and get the water bills under control.

6:08 ^ , I'm sure you can buy some Killa city shirts at the local morgue, provided by the innocent thug gang culture daily. Endorsed by people that haven't a clue where most crime comes from.

International Monetary Fund is as accurate as the World Health Organization with their predictions and forecasts.

IMF is a globalist organization for the elite to control the masses and destroy pride in one's individual country.

ANTIFA and the Democrat Party are tentacles of the IMF.

That must mean there are "Bakers for Racism".

Wow, the Confederacy took over the baking industry. Had no idea.

Who knew that buying a Lamar's or Dunk'in doughnut was supporting racism.

They even sell chocolate doughnuts !

I have noted the white-glazed doughnuts have sprinkles. Speaks of white privilege.

Thank you "Bakers Against Racism" for righting the wrongs of racist doughnuts.

Yes Byron that describes you perfectly.

Meanwhile, in KCMO (City of Fountains), the City can't even maintain it's own public fountains!!!


(The City of Fountains Foundation is a registered 501(c)(3) non-profit organization committed to the conservation of the historic fountains and sculptures in the Kansas City area.)

Tonight we protest from our recliners.

At least we're being honest about capitalized and weaponized race-hustling. I'm all for it! Let's get the grift right out there in the open instead of cloaking it in nauseating, one-sided virtue signaling.

I may or may not do a story on this as it would be a huge story and full of a lot of financial type statements. But in a nut shell if you're bored or really interested go look into the donations to BLM and how the money is used. There is ton of good facts and legal financial statements for some interesting reading. Is it all legit? Sure it is for the most part, but it's "who" is getting the money, "who" is getting paid to handle the money and all the pockets getting filled from it. This looks to be a real cash cow effort for a lot of people, just not for the ones who you might think get any of it.

Suckers, the BLM donations go to share blue a DNC super pac...it is a laundered slush fund for the DNC and soros operations run, "managed," and pilfered by (((them))).

Then don't, and spare us all your blathering.

For the love of God stupid dave...please don't do it! Spare us all the ignorance.

^^^^^HA HA HA do it Dave just to piss those two assholes off in this case a single asshole since same person made both comments.

When a group of do-gooders take their profits and give them to the Urban League, they’ve just defeated the purpose of their work bu giving the funds to a racist organization. And BLM website shows how many fake BLM chapters exist and gives you no idea what they are doing with all their millions. Someone is lining their pockets; there is zero accountability.

Byron has the largest Hate annoying Byron fan base, like no blog ever. Weird

Another one of the annual 7,000 black-on-black murders -- Aunt Jemima killed by Black Lives Matter!

The Kansas City being flushed down the toilet fountain. Or just the Shithole Fountain for short.