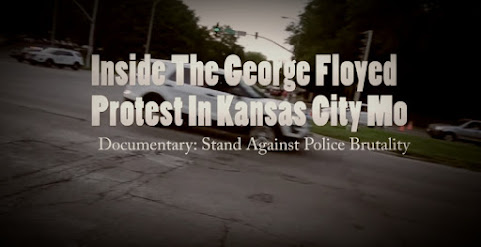 The political commentary featured within this cinematic urban endeavor is understandably earnest but there's also EXCEPTIONAL FOOTAGE IN THIS LOCALLY PRODUCED DOCUMENTARY that certainly deserves a look for those of us still trying to piece together the deets of how this chaotic conflict started.

"This is a raw uncut & unfiltered documentary of the George Floyd Protests In Kansas City Mo. In this documentary you will see what the news and media won't show you. The people of Kansas City will not tolerate police brutality or racism. Together we stand up against injustice in America."

He's right up there front and center in some of those shots.

His narration skills might not work but there's no doubting his courage as a cameraman.

Watching now. The best part is the interviews with the crowd.

This documentary proves without doubt Kansas City is full of some of the biggest foul mouth losers. I don't see a controlled protesting I see an out of control crowd disrespect everyone and each other. They all deserve being charged with rioting and disturbing the peace.

^^OK Boomer. Go away. You're the problem.

The last time I fucked a millenial up the ass in the bathroom at Buddies all he could tell was "OK BOOMER".

I thought the goal of a protest is to show popular support for a movement. You know, lots of people gathered, exchanging ideas, getting media coverage, trying to send a message to the community around a common cause.

This looks like a bunch of kids looking for an excuse to cuss, scream, and throw things at police officers in the hopes of getting a good good video/picture. If this footage was widely circulated their support would evaporate.

These officers have a job. Protect people and property. They aren't there to have a dialogue with protesters or solve problems. They don't deserve what's being thrown at them. A little less respect for what was happening on the Plaza.