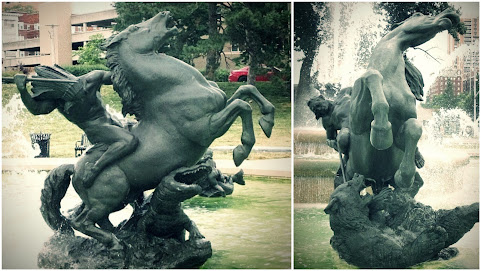 As always, our TKC blog community works to consider ALTERNATIVE viewpoints which mainstream media regularly ignore and today a local activist shares an important perspective that has been overlooked.

AN ACTIVIST CLAIMS DEPICTIONS OF CRUELTY WITHIN THE J.C. NICHOLS FOUNTAIN CONTRADICT THE MLK DREAM OF EQUALITY, PEACE AND JUSTICE!!!

Even a quick peek at the fountain proves the advocate has a point.

"The figures were sculpted by Henri Gerber in 1910 and adorned the mansion of Clarence Mackay in Long Island, New York . . . The purchase and installation of the fountain was funded by the J.C. Nichols family, the city and private contributions, including a collection by school children in the Kansas City area. It was brought to Kansas City in 1951, refurbished by Herman Frederick Simon and dedicated in 1960.

"The fountain has four "heroic" horsemen which are said to represent four of the world’s mighty rivers:the Mississippi River (fending off an alligator), the Volga River (with the bear), the Seine and the Rhine. It also has four smaller figures of children playing on fish, commonly referred to as dolphins."

Here's the crux of the argument against merging these old world symbols with MLK's enduring vision . . .

"The violence and brutality of the sculptures of J C Nichols fountain would blaspheme the memory of Martin Luther King Jr. if it were renamed "Dream Fountain." Slave owners closed their eyes to the sin of slavery and could not see the iniquity of their control of another human being. Just so, Kansas Citians often cannot see through the splash and spray of the fountain to see the triumphalism of the human subjugation of nature and the destruction of the environment symbolized in these sculptures, metaphors for the exploitation of white privilege and racism, part of the very structure of oppressive culture King sought to replace with "the beloved community."

"It is ironic that a Parks Board proponent of renaming the fountain has said, “The time has come for us to stop turning a blind eye towards racism of the past and present,” but eyes are not open to the clash between the sculptures and King's dream.

"How does this palatial background suit King's life story?"

It's a good question that neither politicos or nor the KC Parks Board has answered . . .

HOW WILL BRUTAL, OLD WORLD SCULPTURES OF VIOLENCE AGAINST ANIMALS SPEAK TO THE MLK DREAM?!?

Meanwhile, let's not forget that the local Black clergy call the MLK rename "minuscule" and also oppose it.

And so, if we're not talking about ripping out the J.C. Nichols fountain altogether . . . TKC FIRST: This name game just got a lot more expensive and would have to result in a comprehensive redesign.

I get the point. this is bigger than just mlk. the symbols represent the old world, time to move on!

If African-Americans don't want it there, then why bother renaming it?

Half of the protesters don't even know what the fountain looks like!

Tear the fountain down.

Just keep it named J.C. Nichols
Just as soon as the activists get what they want, they want something else. Typical.

Who the fuck is Alison Kite and why should anybody care what she thinks?

Maybe she would be happier if we added two figures to the fountain: one of a man shtupping a woman who is not his wife, and another of a doctoral student copying somebody else's work. Those were not King's dreams either, but they were his reality.

Since the BLM movement seems to be all about cultural appropriation of white symbols why does it matter what the fountain looks like. Just plant the BLM flag in it and move on to the next cultural icon set for destruction.

11:31 who the fuck are you and why should anybody care what you think?

See how that works asshole?

Show some respect and maybe others will show same to your comments, if not, then FUCK YOU.

Tony, seems like like this thread is a real reach. I know you have to keep the Boomers engaged, but come on.

The biggest crock of the day!

Are you Enjoying the show, .90 Percent of Americans,know this was a Wrong,And slavery was in many countries for thousands of years.And the 90,Percent Have Bigger things,to worry about. Like providing for there Family. And they know that the Liberals try to divide the country every Presidential election. 300 MILLION AMERICANS AND 10 THOUSAND PROTESTERS. You are being played. The looters are not helping out there City's.

This blog is garbage. Not reading this trash anymore. News is garbage.

^^ Don't let the door hit ya where the Good Lord split ya.

Well then make a fountain depicting the following:
Illegitimate children, drive by shootings, drug dealers and pimps
Name the fountain “this was not my dream. MLK”


Black people themselves contradict the MLK dream. Kansas City is a war zone with BLM killing anything that moves and you are going to pick on a fountain? You people along with the white Marxists are sick.

^^And yet you're stupid and clueless.

Whiny whippersnappers want to ruin anything they didn't create from their butt cracks.

Slavery has been around for close to 1 million years. It was only in the USA for maybe 150 years. We went to war to stop it. Give the USA some credit.

time to tear down all public art as well as the museums that house them. The Philistine revolution is a foot.

Would that be when the blacks were throwing white couples in it as they minded their own business ? then shot little 7 year old black kids there. Weird

Every one of these silly Marxist tantrums galvanizes Trump voters.

With all the misspellings it was hard to get the gist of what he was trying to communicate. The fountain is not being called MLK fountain, just Dream fountain on MLK Blvd. And art is subject to interpretation - not actual meanings or intent. That means, we can make it whatever we want it to be. Where was this guy when Officials were looking for a site for East Patrol where there were no vibrations and no hilly terrain? Where is East Patrol now... ? On a street where vibrations can be felt and on hilly terrain. Black people need to get their shit together.

White people need to get their shit together.

How about YOU get your shit together BLieron? You are stupid and evil.

Oh for fucks sake. Art is in the eye of the beholder. I see some happy fellows stomping on protesters and that makes me happy so leave it.

Nothing wrong with racism, it's common sense.

I bet byron thinks blacks are more athletic and better at basketball, asians are pretty smart and studious, jews are...

I agree. White people need yo get their shit together too. But Blacks, to ignore the hostility and violence undertaken in our neighborhoods in favor of these types of narratives... I get it White people perpetuate a lot of racial hatred and its so ingrained in their personalities that they believe they are unaffected by their culture of hate. That aside... have you familiarized yourself with what happened when the city/KCPD, both under Black leadership, endeavored to relocate East Patrol police facility and crime lab? Brutality, violence, financial devastation and the entire idea of police occupying a Black community... the brainchild of Blacks. The site where it is now never met the criteria established by its promoters. I am saying you cam say its okay in one instance and not acceptable with MLK.

In the end not many will call the Fountain by any other name than JC Nichols. He built the Plaza. He deserves credit. I predict MLK fountain will flop. Large numbers of people will resent this. And it dooms the plaza. When you travel to any large city, Martin Luther King street is the last one you want to visit. Oh hell, they already killed the Plaza anyway....

Come'on man, it is artistic and symbolic imagery, that's all.

^^^ where’s your only hope rapey joe at?

7:46 is a racist rapist lover! Hahahahaha!

Former U.S. Vice President Joe Biden once said he didn't want his kids to grow up in a "racial jungle" in regards to desegregation.

Boy howdy! That’s as racist as it gets right there!

actually there.. not their or they are. duh

I don't know if you're kidding or not but that cracked me up.

the statues are old world.

Tear out the fountain, it's ugly anyway.

I'd rather we focus on crime and protecting the plaza rather than just trying to run a political circus.

10:05 ^^ and replace it with Rupaul and a rainbow so your butt hurt confusion doesn't show more than now ?

Oh. I thought it was a free standing statement. As in ”they are not there". You're right, there.

Black, black, black, 24/7, 365. Anybody else tired of this perpetual whine? A fucking pandemic can't even stop it for a day. Hell if an alien race attacked this planet the blacks would have them taking a knee in week and they would do it just to shut them the fuck up! Nothing changes. Most irritating race on the planet and probably the Universe too.

Got a better idea - demolish ALL Fountains, and change our motto to...

"Kansas City - we used to be The City of Fountains, but no longer, thanks to Dr. Martin Luther King Jr."

That's an appropriate move, considering what the "followers of Dr. King's message" do these days.

Troost was a pretty nice, safe street at one time, too.