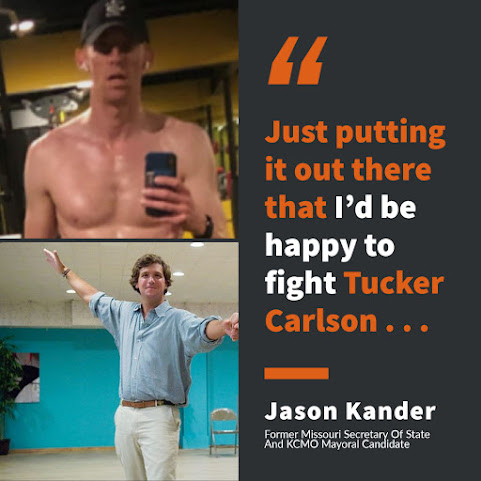 The American political discourse has always been a circus but tonight we want to focus on a local connection to nationwide outcry and just a bit of frivolity in the midst of far more serious conversations.

Jason Kander Tweeted: "Just putting it out there that I’d be happy to fight Tucker Carlson. You know, to raise money for charity and stuff."

It turns out that Tucker Carlson is probably the last remaining mainstream voice of true American Conservatism and his increasing popularity has sparked the ire of progressive pundits, comedians and even local organizers and activists like Mr. Kander.

However, the organizer for Veteran's rights and progressive causes might have to wait in line for a shot at Mr. Carlson. It seems that the main battle confronting the Fox News talker is with Elmo. And it may ruin the momentum of his show . . . 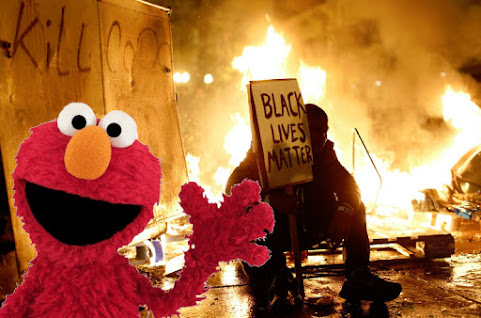 Independent UK: 'Dangerous racist' - Tucker Carlson lambasted for saying BLM movement and Democrats are 'coming for you' with 'woke militia'

Elle: All of America Must Bow Before Elmo, Our Chaotic Antifa Overlord

Elmo would kick both of their asses.

How about a debate? Tucker would kick his ass.

Elmo takes a fist up his keester every day. That 'lil rascal must be tough.

The punchline here is that all three are puppets.

Pander's psychiatrist at the VA must be awfully concerned about his PTSD tuning into aggression.
Of course, actually it's the same old desperate need for celebrity and attention.
Sad.


Racist???? Where are these liberals getting this racist bit? Bring it on and bring your ugly wife. Think this is over punk? It's just beginning!

Tucker Carlson, like any Republican, would shit himself if he had to get into a ring and face a man.

10K tonight at prairie village shopping center for black lives/white lives matter. took up entire front parking lot. 90% white. The movement is headed to the suburbs. Trump down 14 to biden....yes!

^^^
All the hand-wringing clueless suburban do-gooders who have never been east of Troost after dark are going to be mighty surprised when their effortless and superficial support of BLM actually comes to their community in the form of accusations and demands.
They might want to review the story about the wooden horse.

Spoken like an anonymous coward. Tell us all what a brave man you are.

Nah, your tantrumy flash mob is driving votes to Trump at a record pace. Defund police! No more Christopher Columbus statues! Did my pic post to Facebook? I was next to a real black!!

kander? is he president yet?

roid rage in all probability.

just like a complete asshole a man wants to fight some other man to prove nothing!!!!

Both Kander and Carlson look like a couple of freaks in a mental ward.

Jason Kander needs to change his prescription as it appears to not be working.

The libs are all for freedom of speech and open debate until you disagree with them on anything, then you get targeted, silenced and hit in the head with a rock if you're close enough. Kind of like Russia under Joseph Stalin.

Maybe Tucker and Jason can buy a bunk bed set and play Bert and Ernie.

nobody wants to watch this LGBTQ on LGBTQ violence

Tucker is a racist prick

tucker seems like a person of good faith making his arguments, whether one agrees with them or not.


Tucker Carlson is a "somebody"

Pander is a loser, lying, "nobody".

Tucker is the last honest man on tv

I'd rather see a debate between them. Kander would have his brain handed to him. Any party that believes in open borders, higher taxes, abortion even after the baby is born, a weak military and police force, Antifa, giving millions of taxpayer dollars to radical Iranian leadership, costing millions of taxpayer dollars on false impeachment claims against a duly-elected president, focusing on transgender bathrooms more than on revving the economy, and other nonsense needs to go bye-bye.


Pander can't help it...while doing his photo-op hitch..he was traumatized that day the
A/C went out in his office..and he got all sweaty.

Fake soldier with fake affliction. Now he craves relevancy enough to become a social media influencer with the gay boy poofers. My how the unaccomplished have fallen.

kander needs an outlet outside of politics and beyond working out, like atv racing, poker, playing in a rock band, coaching kids' soccer, the Chiefs, BBQ competition, astronomy--anything but politics.

in his own way, he's deep-in, which is fine, but he needs to channel it--sublimation.

Why would Tucker want to fight Kander? Who comes up with that off the top of their head? He doesn't sit around and talk about how tough he is or try to show off his muscles like Fredo Cuomo. Tucker tells the truth. The BLM movement is nothing but a power grab. No amount of groveling or bowing down will appease the left. Quinton Lucas and Andy Reid taking a knee is exactly what they want, and once you show how servile you are, they'll want more. I don't bow or kneel to anyone. That doesn't make me a racist.

kander and biden both say they want to fight.

maybe they should have such a fight and the winner gets the nomination.

^^ He couldn’t even handle a mayor’s race in this cowtown.

Really? Why do you say that? If you’re going to call someone a racist you’d better back it up.

lighten up on kander, folks. we're all board and acting a little silly.

If he's really a fighter, he should get an actor job in Fight Club 2.

TOP PHOTO -- THE PUSSY AND THE WUSSY

Q: What do you get when a mentally-troubled homosexual narcissist challenges an elitist WASP media propagandist to a fight for charity?


A: A dumb fucker and a dumb Tucker posing for the camera while throwing metaphorical jabs only!!!

I want to see Jason bone Tucker.
Just come out of the closet, Jason. It's PRIDE month.

So Kander is saying I'm against violence and I'll prove it by fighting you.

Kander is a typical lib who can't argue facts and resorts to violence. They're a dime a dozen.

^^You're the typical Conservative who disputes facts and resorts to domestic terrorism. You're a dime a dozen. CHUD.


$100.00 says Kander is drawing PTSD money from the VA for his tour where he didn't do anything to deserve it. He is a putz, and a swish.

Who is Kander trying to get the attention of? Is he just trying to stay relevant by getting another 15 seconds of fame in the national media by trying to share the spotlight with Tucker or is coordinated? My guess is he's looking for a political appointment and wants to show that he's tough. I don't think he'd settle for anything less than being an administrator of a federal agency (i.e. think Veterans affairs). If Biden doesn't win - Kander is looking at being over 40 and a lot of years since being an elected official.

I am happy to step in for tucker. I share his views. Happy to kick the shit out of whoever this dick kander is. never heard of him until now.