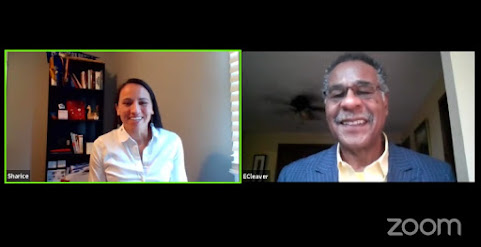 EC from DC: The Fight for Progress Continues

I hope you, your family, and your loved ones are staying safe as our nation continues to fight the spread of COVID-19.

As I’m sure you are aware, last week the nation witnessed the tragic murder of George Floyd by Minneapolis police officers. Despite Mr. Floyd’s repeated pleas of “I can’t breathe,” onlookers captured on camera and watched in horror the killing of another Black man at the hands of law enforcement. This tragedy comes in the wake of similar murders of Ahmaud Arbery and Breonna Taylor.

Racism has been a pervasive problem in America since the first enslaved Africans were brought to this continent in 1619. From slavery, to Jim Crow, to mass incarceration, for centuries racism has denied Black men and women their humanity and the respect and dignity every person is entitled to as a human being.

While this Boogeyman retreats into the closet or under the bed for periods of time, we have never been able to fully exorcize this demon from our nation even to this day. Tragically, we witnessed its evil presence in Minneapolis when a law enforcement officer killed George Floyd with several others watching only feet away.

Since this dastardly deed was made public, we have witnessed civil unrest across the nation, with protests arising in every state in our union. While a small minority of opportunists have sought to use this tragedy to create chaos, the vast majority of people have courageously stayed peaceful and demanded systemic changes to our criminal justice system. I am so incredibly proud and thankful for the millions of peaceful protesters who have organized, strategized, and marched for the marginalized.

When I went down to the Kansas City Plaza last weekend to participate and speak to one of these protests, it brought me immense joy when I looked out to see the most beautiful rainbow of Americans standing up for the civil rights of others and equality for all. The United States of America has always made its greatest progress when people of all colors and walks of life have joined together to move the nation forward. This week feels like an energy of activism has awoken across the country demanding a better future for all of our citizens.

As activists flooded the streets, Congresswoman Sharice Davids and I had a conversation about the history of race, justice, and equity in America as well as some changes we want to see in our current system that you can watch here.

In Congress, I remain committed to delivering transformative legislation that will bring true justice for all. I have already cosponsored several pieces of legislation that would address some of the issues we’re seeing, including the Stop Militarizing Law Enforcement Act, the Police Accountability Act, and the National De-Escalation of Violence and Community Safety Training Act. However, more must be done.

The Congressional Black Caucus has had several meetings this week on criminal justice and police reform, and a legislative package addressing the systemic racism that caused the killing of George Floyd is forthcoming. When this legislation is made public, I will be sure to make you aware.

I know that the tragedies of George Floyd, Ahmaud Arbery, and Breonna Taylor have shaken the American people to their core, but it is important that we do not fall into the mindset of hopelessness and despair. As we have seen this week, millions and millions of Americans have stated publicly that we will not accept these injustices and that change must come. May their voices give you strength to keep pushing.

As the fight for progress continues, I will be with you every step of the way.

their success kind of proves their premise wrong. Sorry.

Well well well, the racist cleave is at it again, give it up, the jazz district (20 years of failure) and mlk blvd (losing since 1977) is your only legacy that and you’re a racist pig. Just go away, we don’t need your kind anymore. You’re senile, old and tired and you’re a has been, you’re toast, bye bye now,


Oh how funny when Sharice Davids wore a shirt that said all of her heroes killed colonizers. I just about pissed myself laughing so hard.

When will cleaver talk about the black on black murders in kc? Nevar, alls he cares about is him and the fat fake revs getting free money.

Thank God two idiots whop will soon be out of office.

Cleaver still hasn't reimbursed me for 17 bucks worth of carwash tokens .
Where all my spitters at?

“Facts do not cease to exist because they are ignored.”

In Africa itself, however, the slave trade is remembered quite differently. Nigerians, for example, explicitly teach about their own role in the trade:

Where did the supply of slaves come from? First, the Portuguese themselves kidnapped some Africans. But the bulk of the supply came from the Nigerians. These Nigerian middlemen moved to the interior where they captured other Nigerians who belonged to other communities. The middlemen also purchased many of the slaves from the people in the interior . . . . Many Nigerian middlemen began to depend totally on the slave trade and neglected every other business and occupation. The result was that when the trade was abolished [by England in 1807] these Nigerians began to protest. As years went by and the trade collapsed such Nigerians lost their sources of income and became impoverished.

See black people been protesting for centurys and even protested when they couldn't sell one another.

In Ghana, politician and educator Samuel Sulemana Fuseini has acknowledged that his Asante ancestors accumulated their great wealth by abducting, capturing, and kidnapping Africans and selling them as slaves. Likewise, Ghanaian diplomat Kofi Awoonor has written: “I believe there is a great psychic shadow over Africa, and it has much to do with our guilt and denial of our role in the slave trade. We too are blameworthy in what was essentially one of the most heinous crimes in human history."

These two just prove that the empire is in terminal decline. Hell, the one grafter couldn't even run a car wash!

Two Peas in a Pod...Sharice never repaid her loan for her the failed coffee shop on the Reservation and The Reverend never paid back his SBA loan for the failed car wash. Maybe their next presentation will be on the topic of "How to Borrow Money Legally But Never Pay it Back" What a joke.

They need to address the use of the word "boomer" now, the new N word for older people in America and evidence of one of the country's greatest stains on its quest for high values and integrity -- age discrimination.

We need MLK, not these oeople.

A: Convince voters that you're the BIGGEST LOSER!!!

Davids primary campaign message was that she was the poor, lesbian, Native-American daughter of a struggling single-mother.

Cleaver's been in Congress for 15 years, the KC portion of his district is no better off, he has dementia, struggles to speak clearly, and answers to his party's liberal white leadership.

I wonder whether Carwash Cleaver is aware that the first slavery transaction in what is now America involved a free black man as the slave master? Probably not. He's only aware of what his aides tell him to do next.

These two are peas in a pod just caring about protecting their "Political Privilege". If it is not now the time to take it back from them then they win and we lose. Vote these two grifters out in November. Any body else is better?

^^^ bad move because when rapey joe and dementia cleave get removed that leaves us with psycho Nancy...... that’s the scariest thing about the despicable dimwits. Nancy palooza, Adam schitless, jerry the penguin nadler. Dang son, what a mess the dimwit party is in.

It practically has to be Kamala Harris for VP now.

Unless Michelle would accede, which would steamroller the election. She doesn't seem so inclined.

^^^ Michelle is not a very smart person to begin with, she really isn't but with the despicable dimwits you’re seeing how desperate they are at this point

The irony of two minority members of congress complaining about being oppressed by 'racism'.