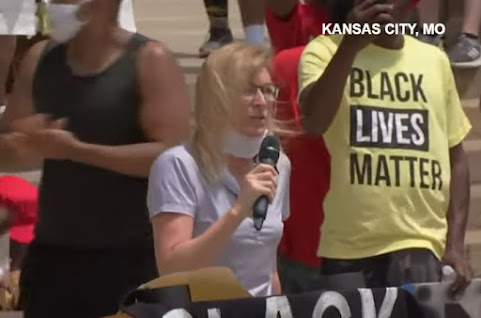 Today there was a notable gathering of protesters today in front of the courthouse demanding change in how the Courthouse handles criminal cases. The response focuses on the recent speeches of the Prosecutor amid a tough campaign season.

The Jackson County Prosecutor’s Office wholeheartedly supports citizens of Jackson County making their voices heard. And we are happy to discuss any concerns with them.

Several members of the prosecutor’s office have already met with Latahra Smith, organizer of today’s rally outside the Jackson County Courthouse, regarding the Keith Carnes case and the conviction review unit in our office.

Our office established a conviction review unit in 2017 and has reviewed numerous applications. No case has yet to result in the overturning of a conviction. The Prosecutor’s Office does not have the authority to act on its own regarding excessive sentences; however, we have joined with incarcerated individuals in writing letters of support to the Missouri Governor. We have been successful in one former Governor releasing an incarcerated individual due to serving most of an excessive prison term.

We did ask the governor to release one defendant who was sentenced to an excessive prison term. And the governor acted on that request, releasing the defendant.

The Prosecutor’s Office does have a tremendous role within the criminal justice system and we don’t take that responsibility lightly. While we have always been willing to meet with citizens regarding their concerns of specific cases, we formalized our review of convictions in 2017 by developing a form to be filled out by incarcerated individuals or their lawyers and then submitted to our office. Similar forms and criteria are used throughout the nation in other prosecutor’s Conviction Review Units. Our form can be found at https://www.jacksoncountyprosecutor.com/207/Conviction-Review-Unit

Many of you are aware that Jackson County Prosecutor Jean Peters Baker spoke at the Black Lives Matter protest on Friday on the steps of City Hall, calling for true police reforms, including no longer allowing police to investigate themselves.

Last week, the prosecutor’s office also issued press statements on our history of pushing for reforms in the criminal justice system. Among those reforms we championed: Outside, independent, neutral investigations must be established for all police officer-involved incidents. Police cannot investigate their own.


We also called for citizens to look closely at police union contract provisions that offer additional advantages to officers being investigated. We called for community policing because it might heal and restore community trust in law enforcement and for the recruitment of more minority officers, as well as officers who live in the community.

In 2017, the Association of Prosecuting Attorneys, an organization for many of the nation’s urban prosecutors, promoted justice reform ideas, many focused on improving transparency and accountability. Much of that proposed template built on or followed the President’s Task Force on 21st Century Policing. But unfortunately those reforms largely were not enacted.

“The time for more study has passed. We already have a path forward. We only need to move forward. We must begin to methodically enact and build on these reforms,” Jean Peters Baker stated.

We have also not “declined to press charges” in all of the officer-involved shootings listed by KC Freedom Project. Some of those cases remain under active investigation.

The office has reviewed other cases prosecuted by Amy McGowan, who left this office more than a decade ago. We have cooperated with all inquiries from other agencies regarding her cases.
#########

she's coming out hot against the police. Not sure if that is the right move.

The prosecutor's office has been a mess for the last 20 years. Jean is actually a lot better than some of the other prosecutor's we've had.

Here's the problem: She's caught in the middle of the black community that doesn't really like her and would gladly vote for somebody else from their own community AND conservatives whites absolutely abhor her. I'll be surprised if she lasts past this election. Might even have to resign if she doesn't.

The challenges facing the Jackson County Prosecutor, whoever that is, are extraordinarily difficult. Citizens who have evidence that could help convict serious criminals often are legitimately reluctant to cooperate in investigations for fear of retribution, including losing their lives. The Jackson County courts lack sufficient Judges and resources, even court rooms, to provide the speedy trials that our justice system is supposed to provide. That results in accused felons either sitting in the Jackson County jail for literally years awaiting a trial or agreeing to plead guilty to a lesser crime, just to get out of the jail. The Jackson County justice system is broken and the Prosecutor gets all the blame.

she can be more proactive as a lawyer about changing often unjust laws and unjust long term consequences of where and what she delivers people into instead of saying here is a solitary form you can fill out.

as an example, what are her thoughts on prison labor and being unable to send money to their families b/c they are paid a disgusting pittance.

Petersucker is the criminals best friend, unless you’re white or Mexican, she hates those two races with a passion.

4:51 are you high or something? Petersucker has been the worst prosecutor to walk the earth.

5:14 then she can band together with other prosecutors and advocates and vocally demand to make her job less 'extraordinarily difficult' as you claim her jobs is.

the extraordinarily difficult jobs of prosecutors, eat my socks.

Hell peace will not be coming till all blacks are released from jail and none never charged again.

With a nose like that, she should be called Jean Petersucker Beak-er. God damn she is pathetic.

Anyone remember Fredrick Scott, the hood rat who killed like 6 people on the walking trails in south KC? He was charged with murder in August 2017. Why hasn’t Jean Petersucker Baker already convicted that hood rat?

Take everything this so-called prosecutor says with a big ol' grain of salt. She'll say anything - this is an election year. VOTE HER OUT!

She may be a terrible prosecutor that specializes in failure to provide justice to the community, she may be a transparently corrupt shill who thinks more of reelection than doing her job, but she ain't gonna miss any opportunity to virtue signal and pander!

How many black families seeking justice have you failed, Jean?


Fight back people BLM is a racist hate group they killed one of their own but praise a back thug who died and was NOT KILLED. Think about that. think a race war has not started? Think again!

Such a shallow cowardly political hack should never be allowed anywhere near anything that has to do with courts or the law.
Her track record is pitiful and KCMO streets run with thugs who have murdered over and over again.
To watch someone in her position play to the mob should be a wake-up call for everyone in Jackson County that the upcoming election should be her last.
And her "leadership" of the Missouri Democrats will take them right over the cliff in November.
A spine transplant doctor could make a fortune with what passes for leadership in Jackson County and KCMO.

Too many to count.

Doesn’t she have some murders set free. You will never hear her say “Victims Lives Matter”.

I am the the director of the KC Freedom project and I want everyone who reads this article to know that Jean Peters Baker lied on me. She has never met with me and any member of my organization to discuss any wrongful conviction case. Along with being an activist I am also a criminal defense private investigator and I can tell you about many cases that Jean Peter Baker knows there were acts of prosecutorial misconduct which led to individuals being wrongly convicted and sentenced to prison. We invited Jean out to come and talk with us but she did not do so. All she did was Lie to the media which is what she normally does on a regular basis. She totally lied on me to the media. If she will lie about something like this what else has she lied about?

PLEASE MAKE NOTE THE KC FREEDOM PROJECT IS A MINISTRY AND NOT IN ANY FASHION ASSOCIATED WITH THE BLACK LIVES MATTER GROUP.

WE ARE A FAITH BASED NONPROFIT ORGANIZATION.