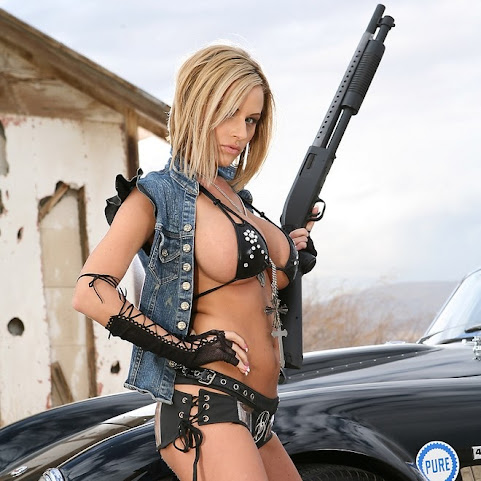 This evening we've communicated with a few industry insiders and they've confirmed the local manifestation of a nationwide trend.

However, just like our ongoing love for hottie Jenny P/Penny Mathis, this surge of interest in the 2nd Amendment is more complex than many believe . . .

Again, we talked to a few people on this topic but Sam Dawson of the KICK-ASS Sam Dawson Show shared some worthwhile info.

While Mr. Dawson DOES NOT sell guns, he has a great deal of knowledge about the industry, the global supply chain, the local scene and more . . . Here's what he says . . .

"Gun Shows all but stopped completely due to Covid-19 lockdowns. Millions of dollars in sales just stopped abruptly. The demand did not . . . At the same time Walmart and other box stores quit selling ammo and some guns. What this did was push a very hungry customer base to local gun stores. I went to a local gun store and range this past week. Blue Steel in Raytown Mo. They had a waiting line to get to the counter. The owner told me so many people are buying guns, the manufacturers can't keep up with demand."

We can confirm this in Western JoCo and the Northland where gun sales are brisk and long lines are commonplace.

Like it or not, amid outcry for social justice, Kansas City is in the midst of a gun buying bonanza that is much more practical than so many of the plebs hording toilet paper.

Kansas City, USA And Granny Get Your Gun!!!

After firearm purchases peaked near the start of the novel coronavirus outbreak, vendors in a number of United States regions said sales increased again recently. According to reports from local news outlets throughout this week, vendors in Florida, Alabama and North Carolina have noted substantial rises in demand from their communities.

Gun sales spiked more than 80 percent year over year in May as consumers responded to safety concerns and civil unrest prompted, in part, by the novel coronavirus pandemic, experts said.

More than 1.7 million firearms were sold in the U.S. last month, up 80 percent compared to last May. That follows a 71 percent surge in April to just under 1.8 million sold, and just under two million guns were sold in March.

Might be the only decent economic news we're seeing this year. At least there's one industry that's delivering.

Well, that and booze.

Beat me to it.

Guns, booze and something greasy in a Styrofoam container.

Hopefully, the punks doing the looting and rioting find themselves on the wrong end of these guns

Here’s the dirty little secret this story doesn’t want you to know, the increase in gun sales was due to blacks and minorities purchasing guns en mass. Ugh oh, times up CHUDS!

I'm in the NRA. That's simply not true. By the way, the gun industry was in very dire straights a few years ago, as they had produced everything they could believing people would panic buy after Clinton won in 2016, and when Trump won they far too many guns than customers. This has removed all of their surplus product.

Why are blacks buying guns? The wholesale slaughter of black men occurs everyday at the hands of blacks. The data doess not support the BLM movement, of course there is no money to be obtained from black perpetrators & black guilt. Okay Chudster?

If Biden wins we will not have any police departments.

Judging by the statistics, seems blacks can shoot pretty well

8:44 not totally true, twice as many live plus the fact that some of them get shot in the head and live, you’d think that is an automatic kill shot but you know what they say about blacks and hard heads amiright! Hahahahaha,

Nothing to worry about.
After the hard-hitting and "objective" report on "gun violence" from a couple cub reporters at the Star, the editorial board will come out DEMANDING that the Missouri legislature pass some "gun control legislation".
Then, after they don't, there'll be a whole new reason to hit the streets, march around, protest, burn and loot.
A perpetual motion machine.

Those buying guns are those who unlike Lucas won't pardon protesters when they invade their property.

9:19 every libtard gun hating city is burning down because of the riots, who’s cities are’t burning? 2nd amendment cities that’s who.

Speaking of which, why is it that every time a bad cop kills a black it happens in the most liberal cities in the country?

Look it up retard.

What happened to your planned Boogaloo, MAGATS? You’re just too weak, limp-dicked and cowardice to make it happen? Stay in your hides-hole bunker like Dear Leader. Don’t want you to leave your below average children and alcoholic wifey all alone, bankrupt and crying now do we?


Gun sales spike in KC????? Well Duh no kidding the mayor just gave black people the go ahead to reak havoc. Other mayors watched as blacks and ANTIFA burn down their business and said they wouldn't do anything because they didn't want to hurt their feelings. So that means we the people have to fend for ourselves and we will.

liberals should not be allowed to purchase any gun. hypocrite MF. Liberals are buying shotguns and pistols believing that those are not as bad as AR rifles. liberals can do as joe says sit on the balcony with unloaded double barrel and get what they deserve when 10 looters show up.

Dear Leader, it’s approaching your hydroimbecillin medication time. Do you want to inspect the bunker before or afterward?

^^^ rapey joe said you don’t need an ar because they’re hard to aim and shoot, he said to get a shotgun instead! You can’t make this shit up! Hahahahaha!

The silent majority awakens slowly as it's patients dissolve.


THE WRATH OF THE AWAKENED SAXON
by Rudyard Kipling

^^^ patience, spell check is a bitch

"...the increase in gun sales was due to blacks and minorities purchasing guns en mass.

It cannot be that. A felony record and drug use are disqualifications to buying a gun.

“Now fuck off, back to where you came from”


Senile Joe said today “there are probably anywhere from 10 to 15 percent of the people out there that are just not very good people.”

FBI site that approves purchases was shut down this morning, stopping all gun sales. I assume due to overload. Also could find no 9mm JHP on line less that .80/round. Guns as well on major sites are largely sold out. Amazing what a little protesting can do.

It’s smart to get your guns and ammo now before the despicable dimwits eliminate the police, it’s gonna be every man for himself when those idiots do that.

Dimwits are just plain stupid and are destroying this country, time to vote these god, America and white people hating bastards out of office.

^^8:25 WE all understand you learned a new 4 letter. CHUD posts ten times a day. Weird

Praise the Lord and pass the ammunition.