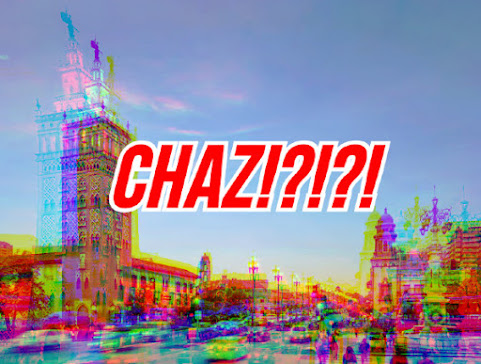 The Capitol Hill Autonomous Zone, CHAZ, is a Seattle district occupied by both peaceful and violent protesters. Organizers of this new nation-state proclaim themselves as separate from the USA and have evoked the ire of conservatives across the nation.

Accordingly and with a clarification that we're not talking about the upscale fancy Plaza restaurant also named CHAZ . . .

AN ANGRY KANSAS CITY MIDTOWNER GIVES UP ON THE PLAZA AND SHARES THIS MODEST PROPOSAL TO HAND OVER CONTROL TO DEMONSTRATORS!!!

"Why bother? They have been trying to destroy The Plaza for at least 30 years. This was a groundbreaking and historic place to live. It was once some of the most valuable real estate in all of the Midwest but I guess we can't have anything nice. The Plaza welcomed everyone but that's not enough. Our leaders won't defend it and they're giving into mob rule. Rioters shut it down for two weeks . . . Unacceptable. The police who wanted to defend residents and property are painted as the bad guys. It's disgusting. So, if we're going to cave to the mob of activists then we should just accept the same fate as Seattle. Just go ahead and call the Plaza "CHAZ" because it's clear to me and my neighbors that our elected leaders are no longer capable of supporting a thriving entertainment district . . . "

That's a bold statement but the Friday note gives us an excuse examine the protest self-rule phenomena and now it might apply to KCMO.


CID To The Extreme


'Everybody I've talked to feels significantly safer': A protester living near Seattle's 'autonomous zone' explains why the neighborhood is better without cops

In the Capitol Hill neighborhood of Seattle, an autonomous zone is taking shape - and the police aren't welcome. Protesters established the space, known as the CHAZ, on Monday evening. It's quickly become an experiment in a police-free community.

In Seattle, a group of peaceful protesters have cornered off several city blocks and established the Capitol Hill Autonomous Zone - a sort of protest haven where artists paint murals, speakers discuss topics of racial equity, snacks are handed out for free and virtually no police are in sight.


What's Going On in CHAZ, the Seattle Autonomous Zone?

CHAZ is the acronym for the "Capitol Hill Autonomous Zone," an area of about six blocks in Seattle ceded to protesters. A kind of commune has sprung up - which has now become a nightmare bogeyman for conservatives, including the president

IT basically happened for two weeks.

This is what local control will bring us. Time to put a stop to all of this protesting now and do something more productive to save the city.

Rename the Plaza "Chaz".
Then get Cher's transgender "son" with the same name to dedicate the new exciting brand.
Then have an extended discussion of what pronoun should be used.
The tourists from all over the world will be flocking to KCMO!
And just wait until they see THE streetcar!
Hahahahaha!!!

Isn’t what their doing in Seattle the same thing as a Ghetto that Europe created for Jews? They have been ignorant of history to the point where they are repeating it

Send in the national guard and beat the fuck out of the George soros paid for criminals. Then freeze soros assets prosecute the criminal and if necessary execute the scumbag. There’s no reason we as citizens should take one second of shit off of any democrat leftist traitors beat thefuck out of them and throw them all in jail now

Taubman, owner of the Plaza, needs to send a heavyweight point man to get the Plaza in motion.

1. Block off some streets

2. Allow extended outdoor dining for restaurants, including on closed streets

3. Police on every corner (not military style)

4. Get merchants to market that they're "open for business"

nihilism in the present environment is understandable.

but CHAZ at the plaza would signal the End Times.

Not Chaz but the Chaza! Face it, the boy blunder and the city council all hate white people and will not be satisfied until they have wrecked everything white people have built and run off the productive class turning the entire city into the eastside. It is not rational. They are delusional, hateful, and functionally insane.

better WAZ at Westport. it has more services for living, such as a grocery store.

OK boomers had free love in the sixties occupations. Do the Chazers?

TKC EXCLUSIVE!!! SOMEWHERE A GEEZER'S DEPENDS ARE IN A WET BUNCH!!!

which stores and restaurants on tne plaza are open and which are closed? anybody knoe?

The ever-present soft bigotry of low expectations and the permanent claim that the solutions to the plight of my people rest exclusively on the goodwill of whites rather than on our own hard work is psychologically devastating. No other group in America is systematically demoralized in this way by its alleged allies. A whole generation of black children are being taught that only by begging and weeping and screaming will they get handouts from guilt-ridden whites.

My my chimpy is up late tonight, must’ve got a banana stuck up his ass and can’t get it out! Hahahahaha!

I hope you appreciate the frustration behind this message. I do not support BLM. I do not support the Democrat grievance agenda and the Party's uncontested capture of our department. I do not support the Party co-opting my race, as Biden recently did in his disturbing interview, claiming that voting Democrat and being black are isomorphic. I condemn the manner of George Floyd's death and join you in calling for greater police accountability and police reform. However, I will not pretend that George Floyd was anything other than a violent misogynist, a brutal man who met a predictably brutal end.

And yet, they now say their is systematic racism and white privilege holding them back. 50 years from now it will be the same old shit of whining and victim hood, burning and looting.

The only advantage Whites, Asians and Hispanics have is the willingness to roll up their sleeves and work their asses off.

Don't ever take a knee to no one. Fuck the NFL and fuck those elitist Hollywood celebrities.

The blacks will take what they are given and demand more. What a wretched race.

10:00 Exaggerated? A few months ago I would have thought so. Not after what we have seen of them during the last few months of dysfunction and destruction. The city fathers of KC are of a kind with those of Minneapolis, Seattle, or Los Angeles. They are radicals and they are insane.

^^You're the one that wants to kill people.

10:56 if you check the facts, white people are the biggest receivers of welfare entitlements, Section 8 housing, food stamps, Pell grants, etc. Your talking points are typical of poor, uneducated white people everywhere, the only thing of value that they think they have is white skin.

11:46 bLIEron you dumb fuck, you’re dead already so shut up, you’re nothing more than a psycho without a clue, just like those dumbass’s in Seattle

Except that the point is that blacks soak up welfare at a hugely disproportionate rate relative to their numbers in the population.

With blacks it's a generational culture of victimhood, thuggery, and dependence.

On average white contribute to taxes, on average blacks are a total loss of millions over their lifetimes.

Red states take more from the Feds than blue states, yep those right wingers like sucking off the teat of government.

Let one in the neighborhood and.