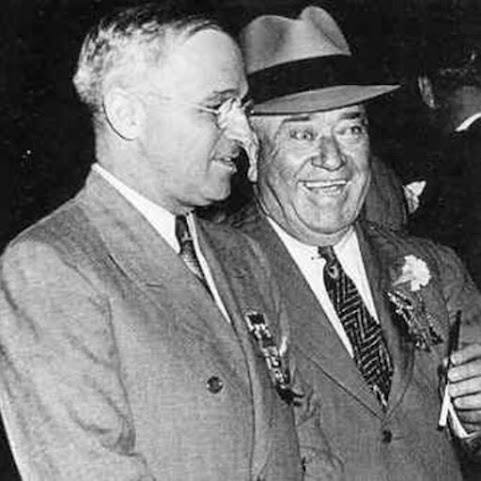 Most longtime residents understand the legacy of Boss Tom Pendergast.

The ruthless mobster taught this town that organized crime easily trumps weak political infrastructure and greedy, weak elected officials. The response to his rule was changing the system of policing in KCMO.

Now, as a reaction to election season civil unrest, this town's "alternative" magazine echos progressive talking points that we've seen throughout the mainstream media over the past few weeks.

"We will pause here to note the irony that—due to fears of corruption—the Kansas City police department is controlled by a state government that absolutely reeks of corruption. See Eric Greitens, Steve Tilley, the attempts to overturn the Clean Missouri reforms and the torrent of dark money poured into state elections. And that’s just getting started."

We've got no love for these Republican bozos but they're essentially harmless and represent a different side of the same coin as our hapless Missouri Democratic Party friends.

But Boss Tom and so many ruthless gangsters who stalk local streets don't care about policy or social justice . . . Killers rarely engage in political slapfights.

While this "think piece" is exceptionally well written, the premise is flawed and fails to understand the terrifying power that the criminal class hold. Real life gangsters can only be confronted by a strong police force. Worst of all, this column knowingly works to weaken the current system in favor of the same structure that enabled a thug who was so powerful that his name still rings out on local streets today.

Was this the last article mean jean wrote before she resigned?

Lulz, no it's Barb Shelly and even TKC can't deny that she's a great writer. I think she has far more people who agree with her.

Indeed, he was a mobster targeting other mobsters and politicians, not the general public and everyday folks walking down the street like the BLM thuggery we are seeing today. Not pulling down historic statues, burning businesses and killing innocents via drive or walk by shootings. I'll trade his criminal activity any day for the current Mau Mau savagery.

^^^^^
Obviously you don't know much about Pendergast. He targeted merchants, home owners and anyone who got in his way. I think that's the point of this post, there is no honor among criminals. They are merciless and they're not trying to win a political argument. They're just out there to earn their blood Money. It's not that political corruption is good, it's just that to compare a gangster to an elected official is like comparing a movie star who plays a serial killer to the less glamorous psycho who chops people up and puts them in his refrigerator.

Sure as hell NOT Biden said...

I'm in my eighties. Recall Pendergast well. If a choice of BLM thugs and the mob, the mob wins hands down.

the Pitch - aka as homo only drug infested booger gossip. If only they were a bit more like Trouser Press, not the Star.

Still not going to click on the worthless rag masquerading as news.

The new california editor has ruined the paper's reputation.

I used to read the Pitch faithfully. Not doing that anymore.

And Tony also succumbs to the mythology that Kansas City Government was "cleaned up" after Pendergast's fall!

Haven't been paying much attention to what's been going on at 12th & Oak for the eighty years, have you, Tony?

The shirt collars might be cleaner, but the shit still stinks just as bad!

At least Pendergast LIVED IN KANSAS CITY when he ran it!

We have an absolutely excellent police dept and Rick Smith is doing an excellent job. Not perfect but way better than most. It's not broken so let's not try to fix it by putting it under the control of local politicians who have questionable agendas.

If the Italian mob moved in and took over a neighborhood with the young wops running the streets, I would happily live there over a thug-infested area. I'd consider the protection dues a form of HOA fees.

the italian mob was a bunch of misfits here in kc. They didnt know villa capri was bugged? and house phone calls tapped? that people bragged about the skimmimg to evrryone in town? spero brothers were caught way off guard. the bars were all not paying taxes. we knew who blew up river quay right away. We knew that billy 'the indian' sttting at the Tuba buying coke was a goverment snitch, later to snitch on Cammissano's fraud activities after buying cammisano's sports car, that the cops were on the take too

Is Billy mentioned above from India? What do they have to do with the local mob?

No dude, not from India or Pakastan you knucklehead! "Indian" like American Indian. Like American Plains Indians from the reservations or Hiawatha dude, the indians with the grey hair and all that cant hold their whiskey. Snitchola!

While all these people want to get rid of statues and rewrite history. The story of Pendergast is a story of long interest in KC. And while his was one of intrigue, corruption and bribes, here is why control should remain with the state.

The city leaders for years have been trying to get hold of all control. A prime example of why these buffoons shouldn't have control is the social unrest that was allowed to happen under this mayor was bad enough. While the mayor enjoys the role on the board as an ex-officio member no mayor should be on the board in any capacity.

The state should exercise more control and quit letting the dogs wag their tails!!

KC is becoming no better than a Baltimore or Seattle, Toledo Ohio. It's getting worse with the likes of many of the council members who have their own agenda's and it is not in the city's best interest!!

Many past mayors are guilty to as are the councils, but, on this current path KC is screwed!!

Truman, bought and paid for by Tom’s blood money.

Thats funny! An American Indian named Billy snitched and brought down Cammisano? The Italian got scalped!

Look at Tom's eyes! Their bugging out even more now cause he is on fire in hell! Aint nobody gonna help him in a billion years. Should lived right, but that wouldnt have been fun, right Tommy boy?

Yeah, old Tommy is in hell. Even a dog left out in the heat today with no food or water, and covered by fleas is having a better time than Tom the roasting corpse. He will never have another second of glory in his life. Only a future of disgrace. What a loser. There was a church on every corner and he ignored his future