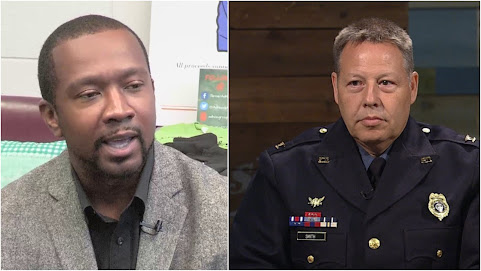 Another voice adds to the intensifying cacophony of voices expressing their frustration against the leader of the KCPD.

Accordingly we ask our blog community . . .

SHOULD KCPD CHIEF SMITH RESIGN AMID COMMUNITY OUTCRY IN THE AFTERMATH OF #BLACKLIVESMATTER RIOTING AND CRITICISM OF POLICE RESPONSE?!?

The Chief has already responded that he's not resigning.

KMBC: There are renewed calls for Kansas City Police Chief Rick Smith to step down. This time it comes from the AdHoc Group Against Crime, a local non-profit focused on reducing crime in Kansas City.

"I saw people met with intimidation and it didn't settle well with me," AdHoc Group Against Crime president Damon Daniel said.

Daniel said the department under Smith has solved homicide rates that are too low and insufficient outreach to the black community. Daniel also said there is not enough promotion of black officers within the department.

"We need someone who is more community minded who is willing to put themselves out there, who is open to criticism,” Daniel said.

I think the strongest point comes from the homicide rate. There's no arguing that the numbers have increased.

But that wasn't such a big deal when the surge started under Forte's watch.

The guy has far more support than Smith.

I wonder if anybody will stand up for him after that photo of him kneeling on the plaza with protesters.

Save Ferris, Save Smith!

Nobody likes Forte. He's just got more political savvy that the current Chief. He knows how to work the media. Smith is out of his league in that regard.

You might think that someone who is the "honcho" of an utterly ineffectual organization that was started by Al Brooks in 1977 and has done pretty much nothing except for making a few folks some money.
90%+ of the homicides in KCMO are black-on-black murders and no one in the neighborhoods cooperates with the cops to help get these goons off the streets and out of these neighborhoods.
What credibility do people like this guy have?
He's really just another front man for the usual suspects.

And if Smith was black they would say everything was great and what a great leader he is. Racists aren't only white.

So has ad hoc ben effective in addressing crime? Nope. Why don't you resign, Damon Daniel?

How many of these useless grifter nonprofits are there?

The left are like children, the only thing they understand is discipline. Giving into their demands only enpowers them to make more demands. Their immaturity prohibits them from thinking logically. They must be arrested, prosecuted and jailed.

The Chief should stay. He has done a good job and responds well to neighborhoods all over KC. Our city is bigger than just the East side. The Chief is still cleaning up the job of his incompetent predecessor.

Typical kolored response is to blame a white chief of police for blacks killing each other, why doesn’t Balonzo put the blame on the blacks where it belongs instead of blaming whitey.

Why do koloreds refuse to admit who and what the problem is?

Why is it always someone else’s fault?

instead of a committee, is there one smart person who can say what's going on, whether it can be stopped, and how to do it, including price tag?

Wow, can't believe that group still exists. They are worthless.

Whites are always the blame for blacks murdering. What about Our Mayor ? Where does the blame lie with him ?

Ad Hoc is a film flam grifter organization and always has been. Check out there IRS 990 forms and see where their money goes. It’s not going to crime fighting.

Mr. Daniel should be ashamed of himself. A lot of us thought he was better and smarter than this. Instead of criticizing KCPD and their Chief, why doesn't he (and others) try and get a handle on the horrendous killings going on in KC? Get out in the community and start calling people out for these crimes. Stick with what you think you know. Again, shame on you.

Hoping he can be what he talks and take criticism, Daniel you're an idiot. Did you finish grade school? Smith is trying to run a police force while B on B crime continues unabated while we have Blah blah blah from the black lives matter bullshitters. If BLM was a real thing there would not be BoB crime. But BLM is just a front to funnel money into ACTBLUE and into the pockets of dumocrats. This whole thing is bullshit. The demonstrations are bullshit. The riots and the looting are BS too. It's time for ya'al to realize you are being used. Word!

Please see the 8 staff photos on the website. 7 individuals are black and 1 is white. Is AdHoc guilty of discrimination in employment? Does AdHoc only advocate for black victims of crime?

From the website:
"The AdHoc Group Against Crime serves as a trusted bridge between the community and law enforcement..."
So I guess that's why Damon Daniel is attacking KCPD Chief Smith? To build that strong bridge?

Is AdHoc President Damon Daniel submitting his own resignation, as he's failed to positively impact the homicide rate in KCMO? It's so much easier to blame a white police chief than to recognize your own glaring failures, isn't it Mr. Daniel?

Is AdHoc Group Against Crime just another private not-for-profit that primarily exists to provide administrative jobs for a few insiders, while constantly begging for money?

I know people in Black Lives Matter. They are pretending to care. They get an adrenilin rush protesting, yelling at cops, breaking stuff and if they get a chance to loot, they will. The less police the more they will try to get away with. They have no conscience, they suppress the idea or right or wrong. Its fun for them to do evil. They would steal from blacks or whites. They hope police get weaker. We need police with brute force to control these types. You know the types, rude, hateful, domestic violence lover. Right is wrong, wrong is right, as they have no guilt. We need more police

I support the Chief, I support the police. They are doing the best they can. It's KC that needs to stop killing itself.

God Bless K.C.P.D. Keep pushing forward Officer! Don't let the Police Haters get in your mind and wear you down either!Remember Officers if you do not mind it don't matter! Officers keep answering the Calls and being kind to everyone even when your bucket is full! Keep the faith! Support your local police!

The leaders of Ad Hoc and other organizations that get public money to reduce crime must resign if they can't prove with objective empirical evidence that they are doing so.

The Chief is a good guy. Mr. Daniel is a tool, literary and figuratively. Ad Hoc is a shyster organization. Kinda like Freedom who you must pay for their support.

"Daniel said the department under Smith has solved homicide rates that are too low and insufficient outreach to the black community. Daniel also said there is not enough promotion of black officers within the department."

Not that we should entertain this guy at all but Forte's moment as Chief yielded the same results... or worse AND the whole thing with the Police moving the City to evict at least 60 Black residents from houses they owned to build a police station was sheer lunacy. He he was trying to make a point with this nonsense, he failed.

The KCPD chief has already been photographed on his knees begging.

Wow that's a great analogy makes sense. Folks need to stand up and start taking there neiborhoods back. The carnage and flesh is in plain sight where is Lord Jesus Christ and the all mighty super natural God Shine that light give these folks justice and freedom and peace one neighborhood at a time. Amen