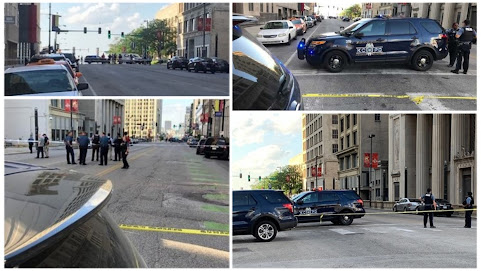 As protests and marches continue, this evening a KCPD officer endured a terrifying attack . . . And so we ask . . .

IS VIOLENCE AGAINST POLICE IN KCMO AND ACROSS THE NATION THE "END GAME" OF SO MUCH ANIMOSITY TOWARD LAW ENFORCEMENT AMID THE CURRENT WAVE OF VIOLENT CIVIL UNREST?!?!

To be fair, all of the protest in KC started out peacefully and today there seems to be a successful effort at showing some sort of "unity" betwixt authorities and community . . .

KSHB: The stabbing happened a half-hour before a planned Unity March organized by KCPD in coordination with local clergy as protests against police brutality continued for a sixth straight day in response to George Floyd's death last week at the hands of Minneapolis police officers.

KCTV5: One suspect is in custody.

There are also a bunch of homeless downtown who are dangerous. In this climate that's probably the only person who would stab a cop.

45 cops have been murdered this year, somebody was looking for number 46

Cops aren't even going to get out of their cars after all this craziness.

To be honest, KCPD is due for an Officer to be killed. It’s just the law of averages.

No Susan, there isn’t an Easter bunny! Hahahahaha!

we're on the eve of destruction

I don’t doubt it!

Gee I wonder why they would do that? Couldn’t be because they treat them like animals could it!

Whoa I don’t know about all that ... but there are a few I wouldn’t mind seeing get hit by a bus... just sayin

Don't worry, the democrats will soon set him free and the liberal hollywood morons will pay for his bail.

That's a very dangerous area where hobo's hang out by the bus stops. Some of them appear to be insane talking to themselves. Kind of like the "Chud" guy on this blog who compliments his own posts.

Prayers to the police officer. Hope the media is happy that they created this firestorm.

KMBC-9 is sickening; glorifying the protesters and looters after a police officer was brutally stabbed.

Vgrosso74 sounds about as relevant as a piece of dog shit that’s been hit by the lawnmower.

Hello everyone I am Mr Smith Benson from USA, I am giving a testimony on how I joined the illuminati brotherhood, I was trying to join this organization for so many years now,I was scammed by fake agent in south Africa and Nigeria, I was down,I could not feed my self and my family anymore and I tried to make money by all miss but all avail, I was afraid to contact any Illuminati agent because they have eat my money. One day I across a post of someone giving a testimony, thanking a man called Paul mark of being helping him to join the illuminati brotherhood, then I look at the man email and the phone number that was written there, it was a Nigeria number I was afraid to contact him because a Nigeria agent eat my $5,000 and go away with the money then I was very tired, confused and I decided to contact the person that was given the testimony and i called him and I communicated with him on phone calls before he started telling me his own story about when he wanted to join, he told me everything to do, then I made up my mind and called the agent called Paul mark and he told me everything to do, and I was initiated, surprisingly I was given my benefit of being a new member of the great illuminati brotherhood I was so happy,For those of you trying to join this organization this is your opportunity for you to join CONTACT MR PAUL MARK call (+2348163028633 or WhatsApp him +2348163028633 or email: illuminatiworldoffamous@gmail.com