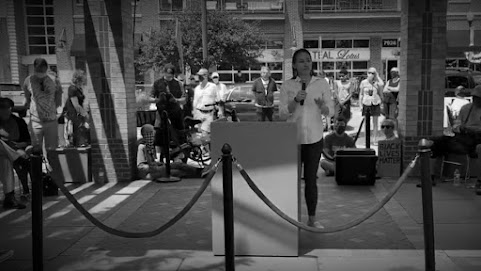 The Kansas member of Congress earned accolades from the rally of hundreds through the streets of Overland Park as she talked about the movement's impact.

"It will be so much stronger if week keep this up, this coalition of people who are showing up and saying 'Black Lives Matter' unequivocally, without explanation, without having to followup with anything else and just being able to say that is one of the steps . . ." Rep. Davids said.

At its peek the rally to Downtown Overland Park reached a few hundred people chanting "Black Lives Matter" through the streets of this suburban enclave.

Here are some of the best publicly shared shots we've seen from the rally: 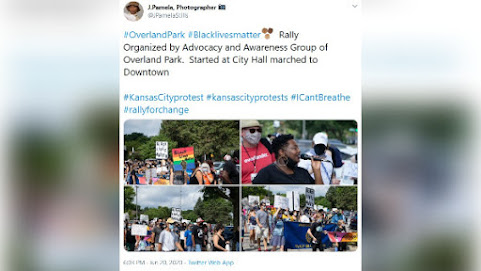 KMBC: March and rally in Overland Park calls for change

She is doing the right thing.

Keep this out of the good parts of OP. We chose our neighborhood precisely to avoid this kind of bullshit.

Yeah equality for all sucks.

7:30, give everyone the same job, the same pay, the same house, the same car, the same neighborhood, put their kids in the same school and there are still going to be those that are NOKD. The sooner people figure out this human truth, the sooner they will see that all their feel-good marches and protests are for shit.

She has to hope that maybe she can get a "job" with BLM after she loses the election in November.
She's proven that she's not much good at pretty much anything other than pandering to one group of "victims" or another and making ridiculous speeches to show how "woke" she is.
What an embarrassment!

"7:30, give everyone the same job, the same pay, the same house, the same car, the same neighborhood, put their kids in the same school and there are still going to be those that are NOKD. The sooner people figure out this human truth, the sooner they will see that all their feel-good marches and protests are for shit."

You may be right (and btw that's NOCD), but until we give everyone the same opportunities, we really won't know, will we?

^^^ who doesn’t have the same opportunities? Those who grow up stupid because the dimwit run cities public education system sucks and that’s who’s fault again? Time to vote the dimwit politicians out because they are the ones holding people down so they can have “workers” to maintain their $10 million dollar homes on twenty acres of pristine property, oh, and let’s not forget their pool boys, landscapers, chauffeurs, private security and on and on. That’s what they want, it’s always about what they want.

to say blm with out any explanation,,, there you go,,, its a war cry, its not about getting a fair shake , its about shaking down people and making them bow to the lynch mob.

So sharice sitting bulldyke is encouraging these losers riots that harm people’s businesses and keep their employees lockout without pay?

Despicable dimwits will stop at nothing to ruin peoples lives.

"^^^ who doesn’t have the same opportunities?"


Well of course Sharice Davids stands up for BLM she is a thug, racist, and a person of color just like they are. After all she wants to kill colonizers so she is right in there with the rioting and destruction of innocent people who had nothing to do with any of this mess. She also supports the cold blooded killing of David Dorn who was killed by BLM. She is saying no one else's life matters. Racist? YES

Look up the homicide stats for Kansas City and St. Louis. Then You will see why back silence is black violence.

A local congressman supporting Black Lives Matter? According to Patrisse Cullors, founder of BLM, it is a Marxist organization. Box checked for marxist-supporting Kansans.

What did Marx advocate? Ad what? What did he teach? I hate teachers. I quit school cause it was dumb. Well, describe Socialism. You a white privilege chud. I no what I no. BLM, Juneteens. It's Juneteeth. Shut up chud. Gimme some o dat stim money.

Tired of the bullshit said...

What a fucking joke! Blacks don''t give a damn about the shot thug. They don't cooperate with the cops when a black kills black. They coopt the mostly white sjws into thinking they give a shit. In fact, they love it when one of these infrequent events happen because it affords a renewed opportunity to whine and do the Mau Mau victim dance That's sorta like a black rain dance, but hoping gbmnt money rains down.

Q: What do you call a Native American lesbian speaking at a White suburban Black Lives Matter protest?

A: A Winnebago in a safe campground!!!


(Did you ever wonder who is Sharice Davids' biological father? She was born in Germany.)

Davids has never said she wanted to kill colonizers.

You're just a white man hating on women of color.

How ironic, they are demonstrating against racism, & you're proving them right.

Where did all that money go that was donated to the cause of ?

Byron she wore a shirt saying as much so yes she did proclaim such. Plus no where did the person mention they hate people of color only you did Byron so that makes you the hater of colors and the flaming racist.

In the U.S., 10 unarmed black men were shot by police officers, while 20 unarmed white men were shot in 2019. Unarmed doesn't necessarily mean they weren't trying to take the officer's gun, or choke or beat them. In fact, six of the 10 unarmed black men were later proven by undeniable evidence to be attacking the officer when they were killed. Yet, contrast those figures with about 7,000 black men killed in the U.S. by other black men. One category of deaths brings a lot of money to Kaepernick, the NACCP, BLM and other groups when it occurs, and the other category doesn't. Like most things in life, follow the money.

SPUNKTROUSER IS STILL AN IDIOT!!

Sharice Davids used to frequently wear a T-shirt that read "All My Heroes Killed Colonizers."

She would laugh about it and mug for the camera, referencing Indians attacking and killing white settlers.

Sharice Davids is an unintelligent bastard child who attended 4 different colleges before barely graduating. She got into Cornell Law School via an LGBT recruitment initiative, and didn't earn good grades. She couldn't hack the legal work at Dentons. Then she had a failed Hoka Coffee business at the Pine Ridge Reservation and never repaid her business loan. Despite having gone to law school, she next became a professional MMA fighter, because she likes to batter women. She failed again.

Then she heard the Obama administration was recruiting LGBT candidates to get them into government positions. She got an early 2016 fellowship at the Dept. of Transportation. She was recruited to run in the KS 3rd District not because she had accomplished anything, but because she was a homosexual minority female.

BLM didn't kill anyone...except for those five police officers in Dallas. Numerous officers were killed and wounded during the latest riots.

Sharice Davids would go to the opening of an envelope if there was a microphone nearby.

I didn't vote for her two years ago and I am not voting for her this year. I am using my vote for the best person running, Amanda Adkins for US Representative in the Kansas Third Congressional District 2020