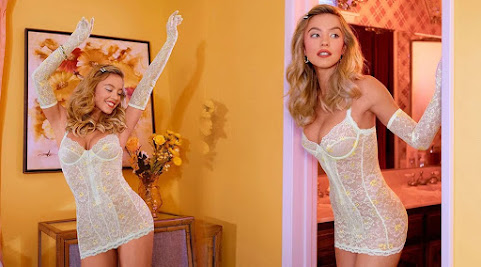 This morning hottie Sydney inspires this quick peek at pop culture, community news and info from across the nation and around the world . . .

Kansas City burger lovers rejoice!The Westport Flea Market Bar & Grill - located at 817 Westport Rd. in Kansas City - announced it is giving away 500 free hamburgers starting at noon Tuesday.The Flea said the only catch is that it's one per customer, but no purchase is necessary.

KANSAS CITY, Mo. - Clay County will ease some of its restrictions on businesses and mass gatherings beginning on Tuesday. Under the county health department's updated emergency order, businesses will be able to allow up to 50% capacity.

KANSAS CITY, Mo. - The state of Missouri will fully reopen Tuesday under Gov. Mike Parson's "Show Me Strong Recovery Plan." The state will enter Phase 2, which lifts all restrictions. Local officials, however, will still have the option to put further restrictions or ordinances in place.

OLATHE, Kan. - In 2016, voters of Johnson County passed a Law Enforcement Sales Tax that's paying for a new courthouse and a medical examiner's office. It's a one-of-a-kind facility that will serve not only Johnson County, but eventually, the region.


Tucker: Black Lives Matter 'enjoys almost complete immunity from criticism,' US is at a 'dangerous moment'

Tucker Carlson opened Monday's edition of " Tucker Carlson Tonight" with a discussion of the popularity of the Black Lives Matter movement, describing it as the first political party that cannot be criticized without professional or personal consequences " The media, in their relentlessly fawning coverage, usually describe Black Lives Matter as an activist group or protest movement," the host said.

The United Nations Human Rights Council will hold an "urgent" debate on systemic racism and police brutality, the organization said Monday. The debate among the U.N.'s top human rights body is the result of a request from Burkina Faso, on behalf of 54 African countries. The U.N.

A new coronavirus cluster linked to a wholesale market in Beijing could impact food shipments into China. The new cluster is significant as there haven't been any domestic cases in Beijing in nearly two months due to strict controls. According to local media, the virus was found on chopping boards used for imported salmon at the Xinfadi market.

Savage x Fenty is bringing the heat this summer with sexy new lingerie pieces in bold neon hues and pretty pastels. From partnering with Megan Thee Stallion to using fans in the new campaign, we can't get enough of the brand's empowering designs.

Demolition on the long-troubled Oak Place Apartments on the University of Missouri-Kansas City campus will begin in the next two weeks. Closed since 2018 because of extensive water damage, Oak Place was the subject of a lawsuit the school filed against two companies when 464 students had to move out.


The Negro Leagues Baseball Museum is about more than just baseball

KANSAS CITY, Mo. - It's been 3 months since the NLB Museum opened its doors but on Tuesday the doors will finally be open to offer a history lesson that people need to revisit. "I'm excited to get some life back inside the NLB museum, a place where the story is about keeping those alive," [...]


More heat & humidity with a stray thunderstorm possible this afternoon

Too hot for burgers, not bewbs.

dip stick, we've told you this 1000 times. They're delicious!

Wait - someone asked this before?

That cutting edge table needs to go to KCMO, as they have plenty of Murder victims to investigate. Guess who kills the majority of people there or anywhere ? I'll turn off the lights and give you a hint.

I hope past UMKC students who lived in the Oak Place Apartments student housing sue the hell out of UMKC and Gould Evans for creating permanent health damage with mold in the student residence halls.

It's obvious they were only concerned about the money and not the student's health.

@7:57, what about Poorly Dunn Construction?
They were the General Contractor, don't they bear equal responsibility for perpetrating yet another scam on Kansas City?
Can't wait to see how badly Dunn screws up the "New KCI", we'll probably have to replace that in fifteen years.

Possibly, @6:3,but nobody of any importance.
Just another idiot trying and failing to be clever.

The reason there was a negro league baseball is because the white players didn't like the term backcatcher instead of just catcher.