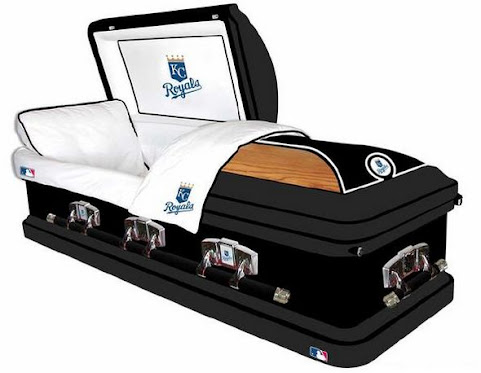 MLB games to return in late July, ballparks will be empty

Kansas City, MO - Major League Baseball has issued a 60-game schedule that will start July 23 or 24 in empty ballparks as the sport tries to push ahead amid the coronavirus following months of acrimony. This will be MLB's shortest season since 1878.

"As baseball returns, the Kansas City Royals released a video portraying baseball and the team as a unifying influence at a time when the pandemic and racial differences keep people apart."

- Royals blame the Coroanvirus pandemic on "nature" and no a Chinese bat.

- Protesters on the Plaza were described as "peaceful" and earned an appearance in this promo video.

- The clip promises unity among in the stands but it's likely that the stadium will never be more than half full for the the meager 60 games.

THE KANSAS CITY ROYALS RETURN FROM PANDEMIC LOCKDOWN AND RIOTS AS A "WOKE" TEAM FOR THIS SHORT SEASON!!!

At least they won't lose 100 games this year.

I miss THE WILDMAN said...

^^^ Quiet bitch. You're here early in the morning so you must love it WILDMAN!

I'm a fan, I hope the Royals still find a way to lose 100 games this season.

The new owner sure had bad timing on buying the Royals.

David Glass is laughing his ass off in Bentonville, Ark.

Glass bought the team for $80 million and sold it for a $1 billion.

Why don't taxpayers receive some of the profit to invest in schools and infrastructure?

The biggest corporate welfare and damage to poor urban folks who pay property taxes goes to Clark Hunt, Chiefs players, and the Kansas City Royals. Then they disrespect the national anthem.

Hi, I am a douchebag and like to say weird a lot.

I like sucking cock. I used to suck my Grandpa's dick while watching Matlock.

I hate life and society.

I am the Weird Guy. I am a Democrat. I support Communism.

^^and you're the biggest tranny-fucker in town so.....


Take a little trip to Valley Forge in January. Hold a musket ball in your Fingers and imagine it piercing your flesh and breaking a bone or two.
There won't be a doctor or trainer to assist you until after the battle, so Just wait your turn. Take your cleats and socks off to get a real Experience.

Then, take a knee on the beach in Normandy where man after American man Stormed the beach, even as the one in front of him was shot to pieces, the Very sea stained with American blood. The only blockers most had were the
Dead bodies in front of them, riddled with bullets from enemy fire.

Take a knee in the sweat soaked jungles of Vietnam. From Khe Sanh to Saigon, anywhere will do. Americans died in all those jungles. There was no Playbook that told them what was next, but they knew what flag they Represented. When they came home, they were protested as well, and spit on
For reasons only cowards know.

Take another knee in the blood drenched sands of Fallujah in 110 degree Heat. Wear your Kevlar helmet and battle dress. Your number won't be Printed on it unless your number is up! You'll need to stay hydrated but There won't be anyone to squirt Gatorade into your mouth. You're on your Own.

There are a lot of places to take a knee where Americans have given their Lives all over the world. When you use the banner under which they fought As a source for your displeasure, you dishonor the memories of those who
Bled for the very freedoms you have. That's what the red stripes mean. It Represents the blood of those who spilled a sea of it defending your Liberty.

While you're on your knee, pray for those that came before you, not on a Manicured lawn striped and printed with numbers to announce every inch of Ground taken, but on nameless hills and bloodied beaches and sweltering
Forests and bitter cold mountains, every inch marked by an American life Lost serving that flag you protest.

No cheerleaders, no announcers, no coaches, no fans, just American men and Women, delivering the real fight against those who chose to harm us, Blazing a path so you would have the right to "take a knee." You haven't Any inkling of what it took to get you where you are, but your "protest" is
Duly noted. Not only is it disgraceful to a nation of real heroes, it Serves the purpose of pointing to your ingratitude for those who chose to Defend you under that banner that will still wave long after your jersey is Retired.

If you really feel the need to take a knee, come with me to church on Sunday and we'll both kneel before Almighty God. We'll thank Him for Preserving this country for as long as He has. We'll beg forgiveness for our Ingratitude for all He has provided us. We'll appeal to Him for Understanding and wisdom. We'll pray for liberty and justice for all,
Because He is the one who provides those things. But there will be no Protest. There will only be gratitude for His provision and a plea for His Continued grace and mercy on the land of the free and the home of the Brave.
It goes like this, GOD BLESS AMERICA

^^Tl/DR Nobody has any kind of time for this shit.

2:23. This applies to your kind of ungrateful fucks.