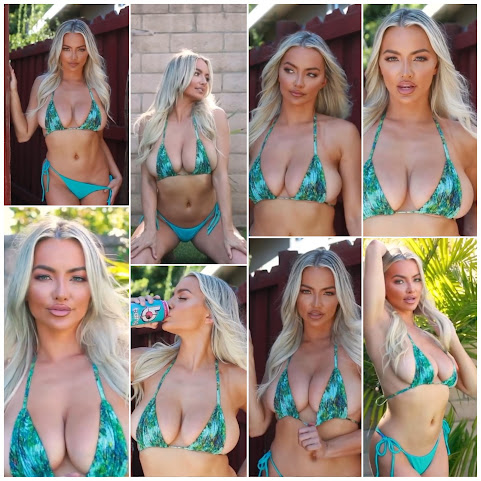 Right now we pay tribute to Lindsey's newsworthy promo hotness and collection headlines from pop culture, community news along with info from across the nation and around the world . . .

In Case Park, way up high on the bluffs overlooking rivers and highways from downtown Kansas City, a plaque memorializing Levi Harrington was found vandalized on June 14, 2020. Harrington, a Black man and father of five, described as an honest man by his employers, was lynched in April of 1882.

As we deal with racial injustice, a pandemic and an economic crisis, there is a Shawnee business that is trying to make a difference. Garrett's Bar and Grill calls itself a melting pot -- a safe zone. It prides itself on its homemade food.

Lindsey Pelas took to her Instagram account on Friday, June 5, showing off her "genetically gifted" assets in a low-cut white top. She promoted her calendar in the clip, revealing that all proceeds will go to a foundation that helps underprivileged youth and adults.

As racial tension continues to build across America and beyond, several celebrities are finding themselves the subjects of public criticism for inappropriate behavior. In recent weeks, late-night talk show host Jimmy Kimmel is among those finding backlash for their past actions.


'The stakes are high': After Tulsa rally, Trump heads to battleground states looking for a boost

WASHINGTON - President Donald Trump will visit the battleground states of Arizona and Wisconsin this week as his campaign tries to regain its footing after a tough week that culminated with a smaller-than-expected rally Saturday in Tulsa, Oklahoma.


Trump increasingly preoccupied with defending his physical and mental health

WASHINGTON - The early June meeting in the Cabinet Room was intended as a general update on President Donald Trump's reelection campaign, but the president had other topics on his mind. Trump had taken a cognitive screening test as part of his 2018 physical, and now, more than two years later, he brought up the 10-minute exam.

Germany placed more than 360,000 people in the western state of North-Rhine Westphalia back into lockdown on Tuesday, after a coronavirus outbreak at a meat processing factory.


Fifteen killed in brutal attack on indigenous village in Mexico

MEXICO CITY - Assailants killed 15 inhabitants of an indigenous village in southern Mexico that has been plagued by local disputes, authorities said on Monday, in one of the most brutal attacks to shake the countryside in recent years.


Telling the Stories of the Protests Here and in Hong Kong

There comes a moment in every foreign correspondent's life when she must confront whether the story that she is telling is hers to tell. This much was apparent to me when I went to Hong Kong last September, to report on the protests that had engulfed the city.

KMBZ is joining with Continental Siding Supply to support the City Union Mission's FeedKCNow campaign - supporting local Kansas City Metro individuals and families with much needed food and groceries. You can drop-off non-perishable can goods now until July 17th at City Union Mission's Food Warehouse in KCMO - or - at Continental Siding Supply's showroom in Independence, MO Green Beans, Corn and Carrots are preferred.

Dancing the role of Odette/Odile in is every little ballerinas dream. It's one that Kansas City Ballet Dancer Amaya Rodriguez had very early on growing up in Cuba. "I became a dancer because of my dad," she remembers. "At around 7 years old, my dad asked me to see Swan Lake with him.

Hide Transcript Show Transcript YOU GOT TO START EARLY WITH THAT. LIKE THIS MORNING. THANKFULLY, TODAY WILL NOT BE A HOT HUMID DAY. WE MIGHT HAVE A FEW PASSING CLOUDS LIKE WE SEE THIS MORNING. 63 DEGREES. LIGHT NORTHWEST WIND AS SEVEN MILES PER HOUR.

Can the President subvert the Courts by Executive Order?
I know he has the power to subvert Congress for 90 days using Executive Orders, but if he also tries to use them to impose sentences then he's skirting very close to exactly the sort of actions the Founding Fathers were careful to design the Constitution to prevent.

"Trump increasingly preoccupied with defending his physical and mental health"

That train has left the station--even though he can drink a glass of water with ONE HAND!

Congratulations to Cynthia Newsome. She is a great TV personality.