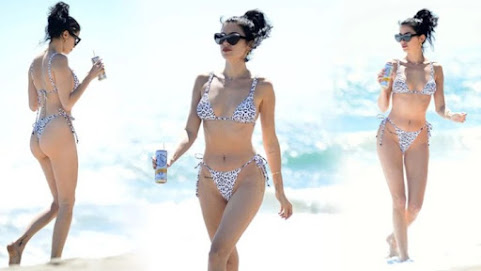 Right now we share the newsworthy love for a Canadian celeb and take a peek at community news, pop culture and info from across the nation and around the world . . .

KANSAS CITY, Mo. - By the end of July, the Oak Place apartment buildings on the University of Missouri-Kansas City campus should be demolished. UMKC shut down the 12-year-old apartments in 2018 after discovering broken water pipes and mold inside.

"We believe we've gotten to the point where we're confident enough to go forward and take a vote." The hotel's developers have proposed a series of new payments to the city and its taxing jurisdictions in connection with the $63 million hotel.

Jimmy Kinder, a farmer from southwestern Oklahoma, is in what he calls "wheat crop mode." Kinder, a fourth-generation farmer, mainly grows wheat and raises cattle. Like many farmers across Oklahoma and the Great Plains region right now, Kinder's wheat is ready to harvest.

Nicole Williams flaunted her amazing bikini body in a white cheetah-print swimsuit, while out and about with her husband Larry English in Malibu on Friday. Her high-cut thong and tiny top put her toned form on full display, as she shared a passionate kiss with the former San Diego Chargers linebacker alongside the sandy shore.

White House press secretary Kayleigh McEnany is defending President Donald Trump's recent use of the term "kung flu" to refer to the coronavirus at a rally over the weekend, insisting that it isn't racist.

At least eight advance team staffers who were involved in President Donald Trump's rally in Tulsa, Oklahoma, rally on Saturday have tested positive for COVID-19. Two of the staffers actually attended the rally, the campaign announced on Monday, adding that they were wearing masks throughout the event.

The FBI has launched an investigation after a noose was found in the team garage of Bubba Wallace, Nascar's only black full-time driver. The noose was discovered at Alabama's Talladega Superspeedway as Nascar prepared for a race, which was subsequently delayed by bad weather, on Sunday.


US, Russia Hold Arms Talks With Little Hope of Accord

The United States and Russia held talks in Vienna Monday on their last major nuclear weapons agreement with little prospect of an imminent agreement as tensions and differences mount over whether they see any value in arms control at all.

Archaeologists have discovered a huge 1.2-mile-wide ring of Neolithic shafts near Stonehenge in southern England. Experts led by the U.K.'s University of Bradford report that the shafts are up to 32.8 feet wide and 16.4 feet deep. The structures have been carbon-dated to 2500 B.C.

INDEPENDENCE, MO (KCTV) -- The City of Independence will not enter Phase 2 of its reopening plan, following a recent and sustained increase in local COVID-19 cases, the city's mayor announced on Twitter on Monday morning. The city entered the first phase of its reopening process June 1, opening city facilities on a limited basis and resuming in-person court dates, with precautions.

KANSAS CITY, MO (KCTV) -- The Worlds of Fun theme park is scheduled to reopen Monday to pass holders, but with new protocols and limited capacity because of the coronavirus pandemic. Visitors are required to schedule their visit beforehand on the park's website or app, and all attendees are required to wear face coverings.


Warm, but mild for your Tuesday

EVENING FORECAST, STORM CHANCE IS MAINLY BETWEEN NOW AND ABOUT 8:00. CLOSER TO 9:00, I THINK THOSE STORMS DRIFTING IN FROM NEBRASKA WILL REALLY START TO FALL APART. WE WILL SEE OUR CLOUDS BREAKUP UP AND BE MOSTLY CLEAR BY TOMORROW MORNING. LOW 60'S TO GET YOUR TUESDAY STARTED.

President talks a lot got a standing ovation for drinking water. I guess that qualifies as leadership for the MAGA crowd,

Nascar planted the so called noose to drive ratings and publicity

^^^^ Did they also give you a tin foil hat, conspiracy boy?

MAGAT farmers can suck it! You reap what you sow, idiots. We warned you Trump would fail us all but you just wouldn't listen. "Lock her up," you screamed. "But her emails," you bleeted during MAGAT rallies.

I hope you lose your entire family farm and then some. Enjoy the horrible unemployment mess and SNAP gubmit handouts. Ignorant retards.

while Joe Biden is brushing his teeth with denture paste

Kung Flu is no more a racist term than Black Lives Matter.

The only people (other than the typical outraged by everything leftist) who cares whether Trump refers to the virus as the Wuhan or kung flu are in the White House media gang. I suspect he uses those phrases just to piss them off. Which is a good thing. Fun to watch too.

^^for boring, pathetic, shut-in Boomers it's fun. Everybody else seems to have better things to do. Loser.