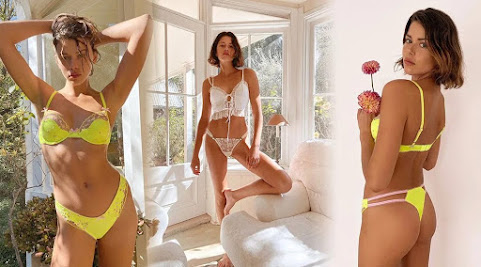 We return to the Monday grind inspired by Georgia and her newsworthy fashion hotness along with these pop culture, community news and national headlines. Checkit:


Kenny Chesney's Arrowhead Stadium show is moved to May 2021

KANSAS CITY, MO (KCTV) -- Kenny Chesney's rescheduled performance at Arrowhead Stadium is now set for next May. Chesney will bring his "Chillaxification Tour 2020" to Kansas City on May 29, 2021. He last played Arrowhead in July 2018. Just over a month ago it was announced that Chesney's 2020 tour had been postponed citing concerns over the spread of COVID-19.

Kansas City's hopes of hosting a Garth Brooks drive-in concert are no "More than a Memory" after organizers announced Monday that the metro area didn't make the cut for the first wave of locations.Our "Friends in Low Places" weren't enough.

On the heels of an eye-opening exposé on Victoria's Secret that the New York Times published in February, the internet was abuzz with commentary ... and in at least some cases, downright rage.


Dolly Parton statues instead of Confederate monuments is what some want

Confederate memorials in Tennessee should be replaced by statues of Dolly Parton, a new petition suggests.

As Republicans and Democrats on Capitol Hill put forward their proposals on policing reforms, the White House remained vague Monday about what legislative reforms President Donald Trump would be willing to sign onto but said he has been working on an executive action.

Before he was one of the president's closest allies, Lindsey Graham (R-SC) was an outspoken critic of Donald Trump - and some members of the Republican Party want voters to remember that come Election Day.


FDA ends emergency use authorization for hydroxychloroquine to treat COVID

The Food and Drug Administration has ended its emergency use authorization for hydroxychloroquine and chloroquine, drugs the president touted in the fight against coronavirus. Mr. Trump took a 14-day regimen of hydroxychloroquine himself. Based on the FDA's continued review of the available scientific evidence, it determined the drug is "unlikely to be effective in treating COVID-19 for the authorized uses," the FDA said.

BLM Around The World

Amid the uproar over policing and racism in America, the U.S. Embassy in Seoul, South Korea, hung a large banner on Saturday that said, "Black Lives Matter" on the front of the mission. Two days later, it has taken the banner down.

Beijing - Officials in China's capital city reported 36 new, locally transmitted cases of COVID-19 on Monday. The update brought the total number of new cases to 79 since last Thursday, when the disease reappeared after almost two coronavirus-free months in Beijing. The cluster is now the biggest the capital has had to deal with since February.

KANSAS CITY, Mo. - Graffiti covered up parts of The Community Christian Church after day three of protests. When senior minister, Rev. Shanna Steitz saw what unfolded at her church, she said it made it very personal. "On the night when things really got chaotic here in front of the building, it was if no one felt safe here," Steitz said.

Hide Transcript Show Transcript SUNRISE. KATIE: IT IS SO PRETTY OUTSIDE AS WE ARE LOOKING OFF TO THE EAST. YOU CAN SEE THE LEADERS OF CLOUDS AND SUN. IF I COULD JUST SPEND TWO MINUTES ON THIS PICTURE, WE WILL SEE THE SUN COME UP DURING MY WEATHER UPDATE.

^^ Not as lame as the rainbow flag always showing up with the BLM . Which are we to support ? The gays first or the blacks ? So confusing to Antifa and the real facist left.

You will have to admit that a statue of Dolly Parton in a City Park would provide more shade that that of some Confederate General.

has justin bieber been rescheduled?

if his wife is pregnant, that might affect scheduling.