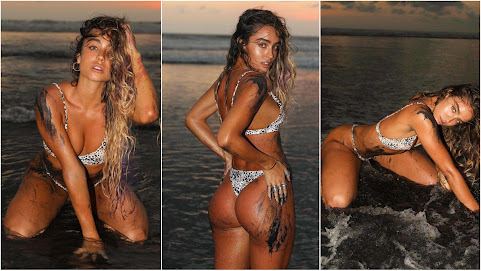 For the early morning Sommer hotness has inspired a quick peek at pop culture, community news and so much more . . .

The U.S. Department of Housing and Urban Development (HUD) is allocating $31.3 million in additional CARES ACT funding to assist the homeless in Missouri. About $5 million in new funding is coming to Kansas City.


Kansas City had $500K in COVID-19 help for businesses. Barely half has been given out

Nearly six weeks after the program launched and more than two months after City Council members signed off, almost half of the $500,000 Kansas City set aside to help small businesses hurt by the coronavirus still hasn't been distributed.

KANSAS CITY, Kan. - A longtime Kansas City, Kansas, meat market dealing with the impacts of COVID-19 is now temporarily closing its doors. Bichelmeyer Meats is a community staple that's been around more than 70 years. The business has survived floods and a fire and was seeing a surge in sales during the pandemic.

Instagram model Sommer Ray shared a handful of photos on her Instagram page on Monday that will no doubt raise temperatures among her millions of followers. The 23-year-old beauty did not provide much in the way of details regarding where or when these photos were taken, but it didn't look like her fans cared about those particular details.

subscribe to The NPR Politics Podcast podcast Seven days before the scheduled June 23 release of a tell-all account of John Bolton's tenure as President Trump's national security advisor, the Justice Department late Tuesday mounted a last-ditch effort to block its publication. A 27-page civil lawsuit filed by the Justice Department against Bolton with the U.S.

The plaintiffs asked an Oklahoma court to impose social-distancing requirements for the rally, including the mandatory use of face masks,or else bar the rally until organizers agreed to implement them. But the plaintiffs were notified by phone later in the day that the judge denied their request for an injunction, according to court records.

At least 20 Indian soldiers have died after a "violent face-off" with Chinese troops along the countries' de facto border in the Himalayas late Monday, the Indian army has said.

North Korean state media released images Tuesday of what it said was the destruction of the joint liaison office with South Korea. Seoul's Unification Ministry confirmed that the building in the North Korean border town of Kaesong was demolished "by bombing" on Tuesday afternoon local time, NBC News reported.


The King of Staten Island Tries Its Very Best

The men and women who populate Judd Apatow's cinematic universe are works in progress-emotionally stunted adults in need of a wake-up call, which usually comes via a transformative life event. In the King of Staten Island, Apatow has perhaps found a new muse in Pete Davidson, whose semi-autobiographical movie The King of Staten Island is a departure from form.

After being closed for nearly six weeks due to the COVID-19 pandemic, Urban Café KC began welcoming back customers last week. And, like so many other restaurateurs, cafe owners Chef Justin Clark, and his wife, Rashaun, are now operating amid protests in response to the killing of George Floyd, a restaurateur in Louisville.

KANSAS CITY, Mo - An 8-year-old Kansas City girl is asking for peace in her city. She was randomly shot one year ago while riding in a car. Now, she and her mother say they want to see an end...

Hide Transcript Show Transcript ANOTHER HOT ONE. WE HIT 90 DEGREES AGAIN TODAY, THE NINTH TIME THIS MONTH WE'VE DONE THA 89 IS OUR CURRENT TEMPERATURE. HUME AT 87%, A SOUTHEAST WIND CURRENTLY AT 11 MILES AN HOUR. WHY EVEN FOR OLATHE AND OVERLAND PARK. 93 FOR LAWRENCE AND OTTAWA.

Now that is a roundup I can live with!

They mention it's a China/India de facto border. Whose court will make the border determination? Who cares?

The Great Pumpkin likes to campaign on the Second Amendment; the First he's not so fond of. Weird.

I understand his niece is coming out with a tell-all book as well.

And your moist dreams of unseating the duly elected President persist. Quaint.;)

Meanwhile, BLM and the riots have virtually guaranteed Trump a second term.

TOP PHOTO -- DOWN AND DIRTY

As Sommer approached, I sensed we would be seeing more black-on-white smears!!!

"And your moist dreams of unseating the duly elected President persist. Quaint.;)"

And yet if he loses in November, he won't be "duly elected" anymore. Weird.

"Meanwhile, BLM and the riots have virtually guaranteed Trump a second term."

And yet most of the protests have been peaceful and much of the violence was instigated by the radical right. Reichstag anyone?

You have a keen grasp of how the process works. Yes, we will have an election in November that will determine the next President.

But your silly conspiracy theory belongs in an Oliver Stone film. Face it; the Democrat party platform is now anti-law enforcement and pro-anarchy. The silly, brutal communist thing failed state in Seattle is all the campaign commercial Trump needs.

Look, you wanted this. Now your brand is all over the place. Who knows? Let's see how the anarchy and fake grievance politics sell come November.

They mean HUD is paying for more losers to stay at home and not get jobs like Byron did all those years.