Kansas City's Mayor offered his personal phone number to the public and now seems to regret inappropriate feedback against his recent policy decisions.

While the comments sent his way are disgusting . . . They're also typical of the reactions that EVERY politico endures from their opposition.

Don't get it twisted, this kind of chatter directed against anybody is UNACCEPTABLE, DANGEROUS, AND CONTEMPTIBLE. Sadly, it's also typical and not anything new for elected officials or any public figure.

What's more interesting and telling is that THE MAYOR HIGHLIGHTS HIS PROBLEMS at a time when all of Kansas City is enduring pandemic threats, economic hardship and a rising spate of violence. Moreover, the mayor highlights these outrageous examples to keep from addressing more legitimate (and numerous) small business concerns regarding his policy decisions.

Those with fundamental training in politics recognize this as a classic "straw man" tactic . . . A straw man is a form of argument and an informal fallacy of having the impression of refuting an argument, meanwhile the proper idea of argument under discussion was not addressed or properly refuted. One who engages in this fallacy is said to be "attacking a straw man".

Check the tweet and some of the followup discussion sent his way . . . 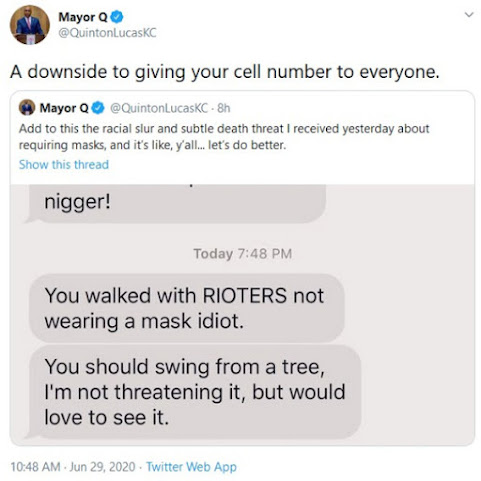 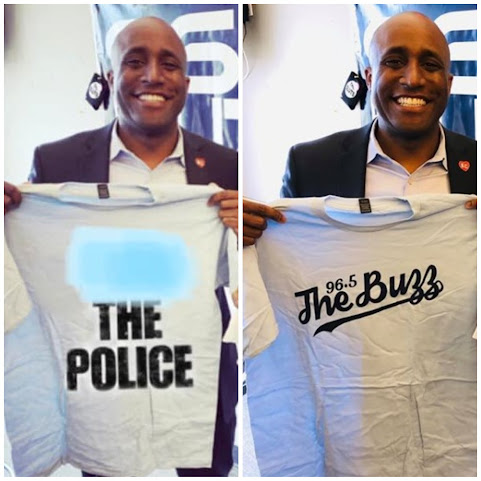 And while the image doctoring is so bad that it's comical, and only the worst kind of social media noob would believe it. Reworking photos is a political tradition and also happens to EVERYONE in the public eye.

Fox4: Mayor Lucas said it was a local number and that he has reported it to the police department.

He's wanting to shift the story from KC's violence. It worked.

I don't agree with threats to anybody. But the complaints about him taking his mask off with protesters are accurate.

People shouldn't threaten the mayor but they should point out that he's being very hypocritical in virtually every aspect of his administration.

His friends are posting this so he can play the victim. The media does not question his dictates. They just go along with the narrative.

Suck it up buttercup. The gays in Lawrence are there to console you spineless bastard.

RE: "What's more interesting and telling is that THE MAYOR HIGHLIGHTS HIS PROBLEMS at a time when all of Kansas City is enduring pandemic threats, economic hardship and a rising spate of violence."

Quinton Lucas went to a private high school, a private university, and a private Ivy League Law School.
He was given a special faculty racial diversity position to lecture at KU Law, and as soon as he announced for the City Council local media anointed him as a future Mayor.
As Mayor he's paid a salary of $141,000+ per year from taxpayer funds. He faced no loss of income due to the coronavirus. Lucas actually protested with those who oppose the men and women of the KCPD. Unless he's moved, he lives in a City-owned building near 18th & Vine that pays no property taxes.

Quinton Lucas is a VICTIM...get it?

Leading from victimhood, weak on crime, and total surrender to the thug mob. That's our Mayor McDrinkerson!

Ok, now he has outed himself as a sociopathic narcissist too. Boy Blunder, you have caused immense suffering to the people of Kansas City and you have shown no remorse. Now, not only do you not feel remorse but you are feeling sorry for yourself when people are angry at you. Seek therapy but please don't seek another office.

The reason anyone can tell this is a hoax is that absolutely no one takes this clown seriously enough to want to do him harm.

And just today, with all the murder, chaos, health emergencies, financial disasters, and all the other unraveling that's taking place in KCMO, smiley selfies kneeling Lucas is at the Missouri DMV recommending that the state eliminate the front license plates on vehicles to save money.
You really can't someone seriously when they don't so themselves.
All entertainment, all the time.
The D-list politicos of KCMO!

It's easy to be a victim these days with so many mentally ill people free to post to websites as much as they want. Look at what Trump has to put up with. At least, Lucas doesn't have to fight the crazies and the disgraceful liberal media at the same time. CNN reporters would sell their own mothers into prostitution if they thought it would mean Trump would lose the election.

He is still better than Jolie Justus, the lesbian.

I'm not a fan of the mayor but racist texts and attacks is not acceptable. You should be ashamed of yourself.

If the Mayor thinks he has it rough from the trolls he should have to endure with what Tony, Dave an others have to deal with here each and everyday. The Mayor is a pussy and not tough like Tony and Dave are. What did the idiot expect when he handed out his phone number?

The mayor sided with the mob and then gets upset when it is pointed out to him ? Granted not in a tactful manner, but his protester buddies use even harsher language. The left is wrong and needs to be told so by the adults.

Your protesting buddies get free rides to destroy and steal as they throw objects and cuss our police force but let someone throw a little shit your way and you want the KCPD all over them.

You and Cleaver both need to move to Atlanta or Baltimore and sling your bullshit on those who will go for it.

The DNC is now saying that Mount Rushmore is a symbol of white supremacy. Talk about mentally ill. The Democratic Party is now the most corrupt and warped political party in the history of American politics. After all the lies and shenanigans to harass and oust a duly-elected president over his entire term, and all the baloney that Hillary Clinton pulled by deleting tens of thousands of emails, having a private server, and destroying electronic devices after a subpoena, now we have the DNC making statements straight out of cuckooland. If the senile puppet, Joe Biden, wins in November, this country is toast, and billionaire antichrist George Soros becomes your new socialist president of the United States.

@9:14-and yet stupid Dave deserves all the hate he gets because he’s a dumb racist who doesn’t live in KC and constantly replies to his own posts. You know CHUD, you’re him. You should follow the lead of your bear chuck, and die like he did.

Called the police? Why doesn't he call his buddies at Black Lives Matter?

Fake news to divert from his total failure as a leader of the biggest city in Missouri, now that’s embarrassing.

And he brings this up the same day a four year old kid gets murdered, what a sack of shit, how dare he deflect from the worst murder rate in this cities entire history. Might as well go spit on that poor kids corpse. Well, I guess he did with those comments, poor pitiful me, I got it so hard. At least you’re still alive and have police protection 24/7/365.

This thread.....TKC in a nutshell. Some guy gets called the N word and told they'd like to see you hung from a noose, but wouldn't do it himself and the target of those words is trying to distract us and play the victim.

This place is like a safe harbor for racists.

Fuck him. He got one bad text from the whole city after giving out his cell phone number. He should be kissing KC's ass for being so awesome because there will ALWAYS be SOMEONE to do something like that. He's just trying to avoid criticism by making it seem like criticizing him means you're an evil racist, like the evil text messager. It couldn't POSSIBLY be that you're criticizing him because he's a colossal failure at governing the city's financing and keeping it safe. It couldn't possibly be because MANDATING masks is complete bullshit, as the % of positive tests AND death rate are BOTH FALLING. (Rising cases is a useless metric when there isn't a consistent number of people being tested over time.) He is just crying about this single text messager as an attempt to avoid criticism. The end. One person saying the n word does not make you above criticism, and dare I say, is not newsworthy.