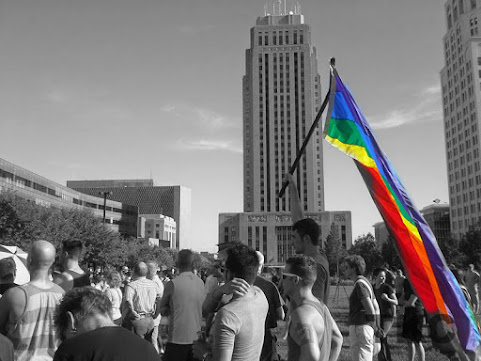 Just a bit of local reaction to a milestone, surprise win and a sing of changing times . . .


On back of landmark SCOTUS ruling, KC gay community pushing for more

KANSAS CITY, Mo. - On Monday, the U.S. Supreme Court issued a landmark decision, extending protections against workplace discrimination based on sexual orientation and gender identity. "I think it really allows the queer community to just show up to work, bring their full selves," said Lance Pierce, founder of Outspoken, a group that works to help foster discussion around LGBTQ issues around Kansas City.

MISSION, KS (KCTV) - The lesbian, gay, bi-sexual and transgender community is celebrating a win in the fight for equal rights, but there are also some who believe this will cause chaos, not equality. It's a landmark decision for LGBTQ rights.

When the U.S. Supreme Court ruled Monday that it was illegal to fire an employee for being gay or transgender, LGBTQ activists in Missouri and Kansas were gratified to see these long-sought protections come at the national level, but say there's still work to be done.

Justice Neil Gorsuch, President Donald Trump's first nominee to the Supreme Court, delivered an opinion Monday that will change how more than 7 million LGBTQ individuals will live and work in the United States.

The Supreme Court ruled Monday that a landmark civil rights law protects LGBTQ people from discrimination in employment, a resounding victory for LGBTQ rights from a conservative court.The court decided by a 6-3 vote that a key provision of the Civil Rights Act of 1964 known as Title VII that bars job discrimination because of sex, among other reasons, encompasses bias against LGBTQ workers.The historic ruling has a Kansas City tie.

Five years after the US Supreme Court declared a fundamental right for same-sex couples to marry, the justices produced another landmark for the gay rights movement by ruling that federal anti-bias law covers millions of gay, lesbian and transgender workers.

"Those who adopted the Civil Rights Act might not have anticipated their work would lead to this particular result. Likely, they weren't thinking about many of the Act's consequences that have become apparent over the years, including its prohibition against discrimination on the basis of motherhood or its ban on the sexual harassment of male employees," Gorsuch wrote.

Trumpers better not just kneel but bend over backwards for LGBT votes.

^^^ that was the whole point of this, the alphabet soup of “different people” should understand now that President Trump is not their enemy, the votes should come pouring in come November. The lame stream media is melting down over this because after all, Trump,was supposed to be the enemy of all people but it turns out that he’s not, nevar was.

The lame stream media is running out of scams and lies to tell their brain washed and brain dead followers.

Proud gay republican here. I am a proud Trump supporter and so are all my gay friends we are part of the silent majority. I love my country. We love our country.

Not really that big a deal all they did was more or less confirm the existing law covered the freaks as well.

That's the thing. If Trump's Supreme Court picks make liberal decision, than who cares if he's in power or not.

Pushes hard for more LGBT satisfaction? Must you mock our lives and our rights?


.so..if someone's a lazy, jag-off employee..they can just say they're gay..then they can't be fired..

You MAGA tards are far too dumb to teach. So sad you don't understand equality whatsoever.

First CoVid-19!
Then Black Lives Matter!
Now supreme victory for LGBT!
All demonstrating that the public has the attention span of gnats.
Just like the elected clowns in Jackson County and KCMO.
About time to sneak a good highly-subsidized "project" through.
Defund the KC Port Authority!

Trump is against expanding gay rights. His justice department argued against expansion in this case. They continue to reverse previous executive orders protecting the LGBTQ+ community. Trump is all in with his bigoted homophobic "Christian" base.

The only people pissed off now are those same bigots who thought Trump would deliver a conservative strict constructionist judge to the court. He didn't and the right wing is sucked again with another broken promise.

My how many TKC trolls will be so happy to keep packing shit and licking it clean. Because that's normal to them. LOL Only in 2020 America.

One explanation is plain and simple. Fake conservative court.

You mean the queers, don't you?

What's the point of voting Republican when their judges stab us in the back?

Now all of the people that jumped on the rainbow bandwagon to enact special accommodations within cities for the LGBTQIA2Z community have egg all over their face, at least that white creamy stuff looks like egg. The SCOTUS just said those special laws are not needed. So I now call on the local council people that rushed to force those laws on citizens and landlords should revoke those laws immediately. Now I get to say "I told you so".

This has nothing to do with affirmative action you ignoramus.

Oh wait, it does. When a competent person gets fired for being gay, that's affirmative action for the straight that gets the job.

"The SCOTUS just said those special laws are not needed."

And yet that would be "no longer needed." Weird.

"manifest destiny" needs to be updated. it means grabbing a continent from the native people so 150 years later we can have a coast-to-coast gay marriage nation with a global war-and-debt machine!

You’re not gay 607, but you are a trump supporter trying to pretend there is some “silent majority.” Wake up: there isn’t. If there’s one thing the maga crowd loves, its any attention. Its a party of “HEY HEY HEY LLOOOOOOKK AT MEE! IHAVEREDHAT!!!Looookkk!!!”