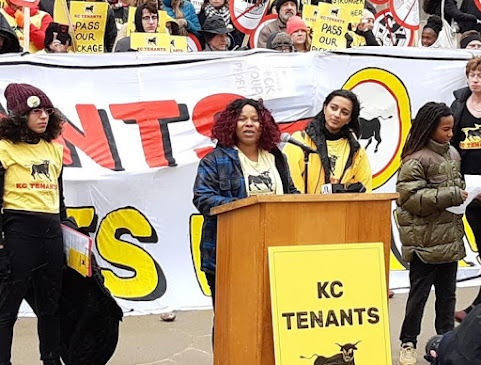 Despite the recent advocacy of KC Tenants, here's the money line from a recent report which offers a preview of a local economic catastrophe in the making . . .

"In Kansas City, local courts declared a moratorium on evictions after a campaign by local tenants' rights activists. Similar campaigns have had success nationally, and as the pandemic went into full swing in the US in mid-to-late March, most places halted eviction proceedings in some form - either on the state or local level - as both a means of shoring up newly out-of-work renters and as a precaution against the spread of coronavirus . . .

"But as the country begins opening up again, moratoriums are ending and 40% of states no longer offer renters any protection. The CARES Act protections only apply to less than one-third of the country's 108 million renters. Missouri is one of nine states in the US that never issued any type of statewide moratorium or stay on eviction proceedings, leaving it up to cities, counties and even individual courthouses to determine how to move forward. As temporary protections are falling away, like a patchwork quilt slowly fraying, hundreds of evictions are already under way in states like Missouri, Virginia and Texas."

Why US is expecting an 'avalanche' of evictions

As hair salons, churches and restaurants reopen across the US, so are eviction courts. Advocates and experts say that an unprecedented crush of evictions is coming, threatening millions of Americans with homelessness as a possible second wave of the pandemic looms. Sitting in her car parked outside of the little white house in Kansas City, Missouri, where she'd lived for two years, Tamika Cole was overwhelmed.

the rent is due.

The "Don't Pay the Rent" crowd is yesterday's news.
And the BLM "Defund the Police" idea will be gone by later this month.
The media and the American public have the attention spans of gnats.
And there's always another round of celebrity wannabees that will do anything to get attention.
The downside of thinking that "change" will be brought about by marching in the streets or posting on social media is that those activities blow away like a wisp of smoke in the wind.
What ever happened to global warming and $350 million bike lanes?

Rent is always due. Pay rent first... everything else is secondary.

Just throw a brick threw the living room window. The city will give you anything you want

The Me Too movement sputtered as it consumed liberal Hollywood.
Me Too morphed into Me Me Me. Make no mistake- Democrats hate Blacks.
Most blacks go to church and want a nuclear family.
Most Blacks hate abortion.. realizing the majority of high percentages of abortion are Blacks.
Abortion is as racist as it gets.

Abortion and nuclear families are the antithesis of Liberalism.

Check out Candace Owens for more.

Retard liberals have kept blacks down for decades and Obama did NOTHING.

Vote for old white KKK-supporting Robert Byrd loving Biden is you are racist.

Stop by 18th and Vine, go get your FREE POLICE PRODUCE and then go sleep in Dream Park on MLK boulevard. Don't need no apartment from the racist landlord.

I'm not too worried about collecting rent this month. Many of my tenants spend more on weed in a month than they do rent. One call to the police, and they will be out on the streets. I've done it before.

Same people will be rioting for another month. Fact. Weird

It's interesting that the woke ancient crowd is pro illegal immigration when that is what causes much increase in rent...you know supply and demand.

^ When you have tons of problems, you import even more.

Want to increase your wages... import hoardes of ppl willing to work for less.

These stooges think if they squeal and flap around enough that rent will just go away. They need to realize that sooner or later, every bill comes due. Should have used their stimulus payment for rent instead of new tattoos and casinos.

Do you owe rent? Have you gotten an extra $600 a week in your unemployment? It is time to pay the piper. Surely you didn't really believe you were going to get away without paying rent did you? If so, then you are an idiot. The day of reckoning is here.

Asoep presented the tale of the Ant and the grasshopper. If you chose a 1,000 I phone , getting your nails done every week , 300 dollar basketball shoes and a $55,ooo escalade. Well too bad dipshit. Give up the weed and maybe you'll make better decisions in life next time around.

And this has what to do with the lingering eviction crisis?

4:16. What about pay your rent first don't you understand? Can you say prioritize?