Recent protest and civil unrest has reportedly cost the KCPD more than a million dollars and counting.

The Plaza has suffered losses totaling more than five million bucks in addition to irreparable harm to property values and the iconic brand.

Nevertheless, today activists earned a milestone victory for a social justice protest that has brought Kansas City's oldest entertainment district, the Police Chief and the Mayor to their knees. 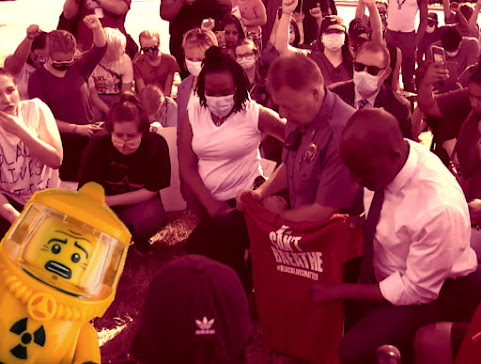 We're trusting that violent looters still confront criminal charges BUT local courts don't have a good track record in bringing criminals to justice AND they're still looking for the "protesters" who burned that police car . . .

In an ironic twist of fate which mirrors the debate over police brutality; supporters of the social justice uprising argue that there were only a few violent offenders among their ranks whilst critics of recent protests condemn the entirety of all demonstrators for violence broadcast across the nation. 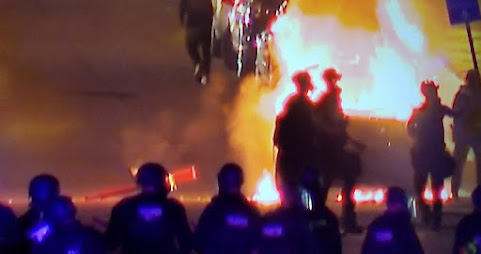 And so, for better or worse, this amnesty for protesters signals widespread political and community support for the Black Lives Matter movement across the nation and in Kansas City.

A great day for justice!

City hall is finally getting the message.

um, I think we all get the message. You can't do business in Kc and if you do the police can't protect you and city hall is on the side of the rioters.

My only question is this: Will the public remember this when it's time for Quinton Lucas to run for reelection?

Mayor mckneely has the backs of the rioters? man that’s just plain stupid

of course they will. And they'll vote for him again!

Peaceful protestors are not rioters, or terrorists.

Well some "protester(s)" leaving the riot terrorized and tried to jack a photographer and ended up shooting and killing him. By the way, he was black.

Black Lives Matter. Only when BLM says so.

Then why do they throw bricks?

So let's see:
If you're a "peaceful protestor", which mostly means there aren't any videos of you throwing frozen water bottle, bricks, or other objects at the police, laws don't apply to you.
And if you're blocking a public street, but "peaceful", you can do pretty much anything you want.
And if smiley selfies Lucas issues a curfew order, you don't have to lay any attention to that either.
Want to be there will be lots and lots of other types of civil behaviors that are tested in the months ahead?
Terrible precedent.
The inmates have been given the keys to the asylum.
Dangerous unintended consequences ahead.
Children playing at government.
What could possibly go wrong?

Justice used to mean having your day in court. Now it means whatever the mob wants it to mean. This will not end well.

Hey Tony how come the links point to your unsubstantiated assumptions rather than actual facts?

That was already rule of law in Kansas City. This amnesty doesnt change that.

Same goes for those who enjoy White privilege.

You dont realize that a day in court hasnt meant justice in a very long time, if ever. Have you been to a Court in Kansas City? Its a completely futile endeavor... way before the BLM protests.

We didn't lock criminals up before the protests. Why start now?

All of you haters are just jealous because you don't stand for NOTHING!

Sure I do. I believe looters and rioters should be shot. I believe that you hit a cop, the cop gets a free shot at you with a club. There’s more, but you get the idea

Setting a bad example letting the children get away with acting up. Look what it is causing in Seattle. Rule of law has to be upheld.

Peaceful protest. Another idiot that has no idea about peaceful and breech of peace , violent criminal acts and destruction of property. I'm sure there is a reason you type instead of practice law, do major business or run anything beyond your mouth and to dollar general.

Any fuckin black man seen a Western filmed before 1965. If they grew up on em like their grandpas, maybe they would understand "justice" or law enforcement. Think these are just myths ?. Read all you can about Wyatt Earp, Bat Masterson, Frank Hamer, Eliot Ness, etc. Many of these guys were flawed men who new how criminals think because they were once criminals themselves. That meant they new that " buffaloing" a man--that had already proved he had no respect for law and order--was the only way to ensure they stayed alive to serve another day. How did they know ? Because they knew from their own days as shitbird thieves that any cowboy packing heat-- when the law was clear that all guns were to be giving up when entering town--those Cowboys were not gonna listen or cow to any authority. What does Black culture (represented, I suppose, by popular music) preach and brag about ? Come on you all know-- " we ain't bitches, ain't no one telling us what ta do ". The 80% of the cowboys who rolled into Dodge City were hoping there would be a set of rules enforced-that is, to protect them from the ignorant murdering bastards that didn't give a shit about anything.Those other 20% were the stupid ones who were ignorant of God and family. Rap and hiphop don't sell unless it uses the outlaw creed of not givin a fook bout no one, and all of current culture caves in and acts like they buy it, cuz the ignorant 20 % that believes it scares the sheet outta everyone else . We are in an age where preaching truth against falsehood seems like a death sentence, because any man preaching the truth seems to be up against a crowd that will stone him within seconds. Usually it is pride that makes us cowards, but now we are cowards because of fear. I refuse to believe Black culture in America represents the 20% who abhor civilization, manners, and rule of law. It appears that the media, nearly every congressman, NFL owner/player/coach, corporation, etc., feels that the thugees culture needs validation. God help us all.

Crap like this is exactly why I moved from the plaza area to Cass county. I'd rather be around a bunch of inbreds vs. being a sitting ducks for punks on the plaza - and then be left in the cold by 12th and oak hoods.

So.... lets waste more train money and extend it to a plaza completely abandoned by anyone with money to spend and a job.

Damn! Another thread proving Kansas City is the hellhole of the nation filled with racists so ignorant they don't realize how racist they are. The level of ignorance here is astounding.

There are expensive condos and A class office space edging the Plaza now, all because of the walkability in a charming venue with great restaurants and stores.

It's hard to see it falling apart and I don't think it will.

On the other hand, surely quite a few folks are not taking night strolls right now.

it's important to not exaggerate when there's forbearance of protestors.

why not a hardass approach?

that was tried in 1970 and it almost set off a revolution. universities nationwide had to be closed.

The only hope left for KCMO is for the Hispanic residents to gain the political power they deserve and have been denied. They are the ignored minority in the political world of KCMO. They are the dominate minority now. its them who can turn this around. I think they will eventually, after the corrupt inept black elites have their day to prove complete incompetence. The brain dead liberal whites won't do it. They will move away where jobs are because they won't find them here.

KCPD Polic chief is on his knees begging.

They want you on both knees with your pants down. Still not enough.

White privilege is a Marxist lie

The word 'racism' has been hijacked and weaponized by the left into total meaninglessness.