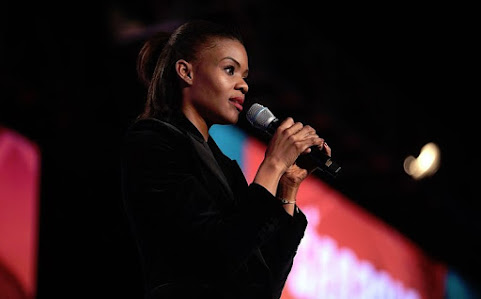 The head of the Minneapolis police union said George Floyd’s “violent criminal history” needs to be remembered and that the protests over his death are the work of a “terrorist movement.”

The cop who said that is facing demands for his resignation and has become a symbol for police resistance to reform.

Meanwhile, in Kansas City . . . It's interesting and in many ways enlightening that mostly white, middle-class tax fighters and conservatives are taking their lead from a prominent African-American female pundit.

Candace Ownens has sparked a nationwide controversy by calling out the criminal record of George Floyd and many denizens of our blog community have taken her words to heart.

Candace Owens: "I DO NOT support George Floyd!" & Here's Why!

Newsweek: Everything Candace Owens Has Said About George Floyd So Far

Owens is a uncle tom, nobody listens to her

G-Floyd, I can't wait for Netflix's bio-pic, served 5 years in prison for home invasion armed robbery. Sired children all across this country and didn't support any of them. A drug user. Just a sad individual who resisted his arrest for forgery and unfortunately paid the price. Fuck him.

Candace speaks the damn truth! The left is trying to bring violent revolution but a reckoning is coming. we won't bow the knee to fools who are the real racists. Push back is coming. Lines were crossed.

Nine unarmed were black men shot by a white police officer, while 20 unarmed white men were shot in the U.S. in 2019. Unarmed doesn't necessarily mean they weren't trying to take the officer's gun, or choke or beat them, so these figures might be skewed a bit. Yet, contrast those figures with about 7,000 black men killed in the U.S. by other black men. One category of deaths brings a lot of money to the NACCP, BLM and other groups when it occurs, and the other category doesn't.

In other words, "We've tried the victim, & found him guilty."

No need for a trial.

And yet here you are, telling lies. Weird.

Shameful, the movement over truth at all costs. Building narratives with feet of clay.
Black Lies Matter obvious but unspoken agenda:
DEMONIZE AND SANITIZE.

Demonize white people while sanitizing the Black Criminals. Sorry going be hard to sanitize the stink off this time. BLM has taken this Worldwide. Looks like there is no place on earth that blacks are not the victims.

Fucking amazing that Covid-19 can't hold a candle to this circus. Evidently shows leadership feels NO LIVES MATTER to push this horse shit bandwagon through streets of every major city on the planet, virus be damned. Can you say Ventilators boys and girls?

I sympathize with the persecution of innocent blacks; I have no sympathy for criminals.
George Floyd shouldn't have been killed, but he was nó stranger to crime. He was aaa career criminal and does not rate being the face of this civil rights movement.

Floyd was dealing drugs, he had held a women at knife point in the past. He should have been serving all of his sentaces for 6 felonies. If so he would still be alive. A hero, lol what a joke.

This bull shit has done more to promote racism than the Democrats have accomplished in the last 150 years. The Democrats are the party of the needey. They were starting to gets jobs and respect from Trump, the Democrats can3have that they need victims.

Uncle Tom the nick name given a black person that is a part of the wider society, mature and civilized. We all, regardless of color strive to be Uncle Toms.

Felony Floyd, Journey to the dark side of logic.

Candace is a fraud grifter and right wingers eat that shit up. "Look, dat there is a black women and shes tellin it like it is".

Oldest trick in the book. She makes a real nice living off of dumb right wingers.

What's her cut on the GoFundMe that was recently shut down?

Please, this movement is not *just* about George Floyd. It's about the condition of the American Heart!. 80% of Americans agree that something needs to change. They finally witnessed a visual of what minorities have been expressing for years. George is an ICON that stands for all that minorities have had to suffer for 4800 months. Imagine how you felt (after just two months) when you were not "free" to do what you needed/wanted to do because of COVID-19 - then multiply that by 2400 months. That is how many months the fight has continued for freedom and equality for minorities. It's not about GEORGE its about the whole world - the country - the state - the county - and my city/town.

6/8/20-12:35p
If you want to go back to the BEGINNING of their troubles->I guess that all of those months ago Africans shouldn't have been SELLING other Africans to slave traders. Blacks in America who are actually descendants of African slaves (BHO would not count but Michelle and their kids would) should demand reparations from the current African governments whose ancestors sold their own people into slavery!

I have not said anything about reparations during my discussion here. I am dealing with MY country where I was born. AFRICA is not MY country so I would not need to deal with them. AS a slight reminder, the only people who are native to this land are the Native Americans.

YOU'RE the one that wanted to go back into history for "4800 months" and YOU DID say "its about the whole world" (and the last I checked, Africa is part of the world) so what I said still holds true.

I am sick and tired of descendants of African slaves in this country ONLY blaming Americans for slavery and ignoring the Africans that sold other Africans into slavery (and those that kept slaves for themselves). It's the 'butterfly effect', one thing leads to another then another and so on.

I never used the word native at all or even hinted at it. I could have mentioned what Europeans did to MY ancestors in this country but I did not feel the need to do so nor do I need a 'reminder' on the word native.