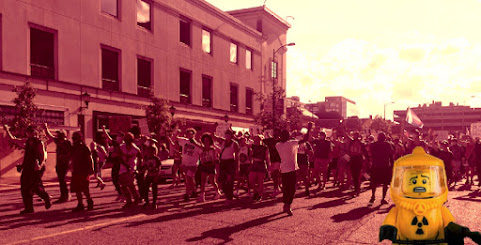 Nine days straight of protesting continue for this town's most historic entertainment district.

It's too hot to wear a mask and crowds don't seem to be practicing social distancing.

Some streets have been blocked for protesters and nearly all plaza businesses remain closed.

Further reading from across the nation and around the world:

Politico: Chainsaw-wielding racist gets boosted by a top Trump aide as race protests sweep the nation

9 days of shutting business down isn't very productive. Sounds like a damn nightmare.

Better the plaza than brookside or ward parkway.

NOBODY is actually in the Plaza to see your real important march. Only local news cameras and lying-biased reporters, but no people. They almost all have been run off.

At this point, your demonstrations mean nothing, other than a ton of overtime for the cops and everybody in town saying "We can't have nuthin' nice"

There are many older corporate executives huddled in their expensive places on the Plaza scared of the protesters. Unless they are in Aspen spending the companies money on free gift bag goodies and booze. Tommy?

It’s obvious that practically all of the protesters are homosexuals. That is probably why Quinton is so willing to kneel with them. It also explains why they are such pussies.

Tomorrow the Soros money will run out, they will be broke and without jobs, and the rest of us will go on with our lives far mare prosperously than they. Fuck 'em. Let them starve.

The hypocrisy of both sides is amazing. Three weeks ago liberals were demanding that everything stay locked down to avoid a second wave of Covid and conservatives were complaining about the fascist quaranteen orders. Fast forward three weeks and liberals are saying it's worth the risk to protest, and conservatives are worried about the risk of infection in the large crowds.

...and all the while, we have falsified jobs reports being issued (with footnotes admitting the numbers are wrong), wall street uses those numbers to gen up another rally, the wealthy see unprecedented increases during such a poor economy, and many wonder how they will pay next month's bills.

The power of mass destraction. Look at the swinging necklace and pay no attention to the hand reaching for your wallet.


How about doing a march for the cop you killed in St Louis and for the people who's lives you destroyed. You no good morons!

8:24 only because the despicable dimwits have been playing the Kung fu flu death to everybody if we don’t do as they say card, the hypocrisy of the dimwits is mind blowing.

If it weren’t for double standards the democrats would have no standards at all.

The Dems want to raise taxes for socialist goals even more so the net income of our paychecks can be cut in half. We're being taxed to death and it's destroying the lower and middle class of America the most. The party that believes in no police, open borders, higher taxes, abortion even after birth, a weak military so China can take us over, false impeachment hearings that cost taxpayers millions against a duly-elected president, etc. What's not to like about a party that has gone off the deep end?

I still can’t figure out why the dimwits want to destroy the middle class?

Is it so they can control everybody if they’re poor?

Workers is what they call them. Not people, workers.

Has anybody seen my goddamn brown belt?

The only thing they are accomplishing is killing the Plaza. Since the Plaza is now a no-go zone nobody is even going to see their protests. Do these fools have a brain in their tiny heads?

9:54, we were open eight hours and did $3000 worth of business today. The only "No Go Zone" (Man you're a fucking homosexual) is between your ears.

FUCK ALL OF YOU.

^^ And Fuck your ass. Come home for some Snicker treat bitch.

Well we got the police to stop rioting and next we will get them to stop ripping off our taxes.

Oh ouchie you're hurting my feelings. I'm going to have a good cry after the police are abolished.

It looked like Little Newark when I went down there to laugh earlier this week.

Weird that They are winning. Billion dollar shopping center shut down. The owners will come to the table soon enough and agree to help defund police.

So you've been to Newark to buy your Mexican meth from black gangs and now you are giving it a bitchy review.

Why are they still protesting? The boy blipunder got on his knees, pledged his allegiance and signed their stupid little demands, what’s left to say?

When the tax base is gone of course the police will be defunded. So will everything else in the city. But who cares right? The nihilists will have won.

Wow 500 that's 1 out of every 1000 person in the area. But by the media coverage and amplified virtue signaling you'd think it was a large majority of kc that turned out.

This is a jewish bolshevik coup, manufactured and instigated by the elites and the lackey MSM.

Why would bank of America donate 1 billion, wouldn't it get the same virtue points if it had been 1 or 10 million. Its money laundering, jews run BLM, antifa and the money will go to more jews to subvert society. The money is laundered tax payer money skimmed off bailouts n war contracts and foreign aid.

807 sadly you are wrong the soros money is more than ever. It is laundered through donations, why would bank of America donate 1 billion dollars, since when are banks concerned with justice of any kind?

824 nice try....sane and intelligent people are not worried they are just pointing out the hypocracy of the left and it's nonsensicle pretzel like arguments in the lackey MSM.

Nine unarmed black men shot by a white police officer, while 20 unarmed white men were shot in the U.S. in 2019. Unarmed doesn't necessarily mean they weren't trying to take the officer's gun, or choke or beat them, so these figures might be skewed a bit. Yet, contrast those figures with about 7,000 black men killed in the U.S. by other black men. One category of deaths brings a lot of money to the NACCP, BLM and other groups when it occurs, and the other category doesn't.

where is waldo in all this?

are they part of kansas city?

How many of the protesters were unemployed before all this ? How many will remain unemployed. Policy being forced on tax payers by nontax payers is ridiculous. If you don't pay propery taxes you shouldn't be allowed to vote. F__king children.