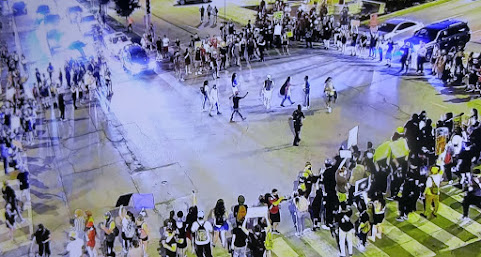 Final note on truth, consequences and justice for tonight . . .

The Jackson County prosecutor didn't want to charge statue taggers that were caught red-handed and now THE CITY PROSECUTOR makes a similar determination about police action against protesters in the recent #BlackLivesMatter uprising.

"The city prosecutor’s office reviewed more than 1,700 citations to determine which charges fit the ordinance. In the end, 202 charges were dismissed.

"The people with dismissed charges will receive a letter from the municipal court this week, the city prosecutor said."

Good to know where she stands.

There are more important violent cases to prosecute. She is standing with her voters on Jackson County who elected her.

Then people need to vote for her opponent in the upcoming election.

This town needs a real prosecutor.

Funny how Oklahoma isn't messing around down there doing stupid STUFF like this.

other than a few WEIRD people who show up and make a fuss. If you took a poll, you'd find that most people support the decisions of the prosecutor. She is doing a great job.

^^^^^And you're doing a great job of portraying an idiot.

She has a Republican challenger who is a black female. I would much rather vote for someone else. The prosecutor has been entrenched in the political system. Time for change. That is what Democracy is all about.

I mean, can't you fucking idiots read? The CITY prosecutor, not the county prosecutor.

^^^ You forgot to reload the page dumbass. That headline was only there for a few minutes. I'm sure Tony thanks you for your gentle correction. But I think you're a scumbag.

Well, I still agree with the Jackson County Prosecutor refusing to prosecute the statue vandalism and I'm glad the City isn't wasting time with the protesters who were doing the right thing!

No, no, Greaseo, YOU read this:

In Tony's rush to troll the county prosecutor YET AGAIN, he didn't even bother to look at the facts or, apparently, even read the link he posted.

I mean, come on. You ever thought of being the White House press secretary? You bullshit through things the way she does, only in a much more clumsy and ignorant manner.

Defending an idiot is one thing. Defending irresponsibility makes you a liar too. If someone pointing out the truth makes them a scumbag you're hardly fit to live.

I didn't ever see the headline about the Jackson County prosecutor. There was a reference to how she declined to prosecute the taggers and that was a mistake. Chairperson Theresa Galvin made the right comment: "The statues belong to the voters and not the Executive. "

And definitely not the vandals.

You can't move on if you continue to make war on each other.

No wonder you have so much crime, you seem to hate each other.

There is no race war.

Thanks for reminder TKC but I just have to look at the murder rate to know that's the truth.

^^ If you think the protesters were doing the right thing, you really are a moron.

Byron how about we worry about our crime and you worry about your shithole of West Virginia. Stay out of KC and off of our blogs. We didn’t have a race war but BLM is trying hard to make one.

She has no such opponent. Prove me wrong.

The criminals run Kansas City. Always have. Now the protesters realize this and they want in on the action. People who keep on voting 4 this leadership are the ones who are to blame.

Vote right for a change said...

Tracy Chappell is running against Jean Baker. People are going to be surprised to see a lot of Black people vote for her and against the Democrat.

How about the looters who broke into the Jewelry store on the Plaza??? Do they get a pass?

A pass? They still haven't been captured!

As many would think- Mayor 10-10-10 is over his head.
Look at the RECORD homacide rate in KC.
Is it not predicting that if you let people off the hook they know you aren’t serious?

Polls showed Hillary landslide on Trump.... polled people hoodwinked again?
Dem cities will be bankrupt and restaurants close w other businesses due to 10-10-10 and other restrictions... are you ready for higher taxes?


This is racism at it's worst. This is PROOF that the racism in KC is not against blacks but against whites. Not against welfare people but against business owners and people who want to work.

Byron is the ultimate authority. A keyboard warrior with no life or intelligence.

Fact criminals do run this town way befor 2019...The voting percent is 11%-13% . YES SAD THE GOOD OLD BOYS AN GIRLS have sold this town to the current mess KC.

I'll take a weird over wack anyday..She is from the devil a evil woman.