Protest over the death of George Floyd continued today as crowded of protesters descended upon City Hall.

KANSAS CITY MAYOR QUINTON LUCAS DIDN'T JUST BOW TO THE ARMY OF ACTIVISTS, YET AGAIN HE KNEELED AND SIGNED THEIR PLEDGE FOR CHANGE!!!

1. Local control of the KCPD
2. Body Cameras for all officers
3. A community review board

That first one is a point of controversy as authorities have continually expressed their concern of political influence at City Hall thwarting law enforcement. However, many insiders see so-called "local control" as an inevitability.

The Mayor earned a great deal of support from the crowd along with a few critical questions. He look at least an hour to speak with protesters and listen to their concerns. 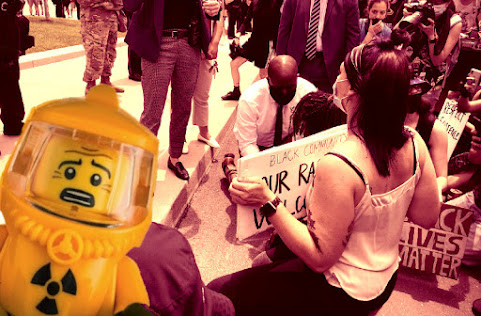 Witnesses of the scene call it "tense" but peaceful. The protesters made a circle around the 12th & Oak square today and also voiced complaints in front of the police department and Jackson County Courthouse.

More than half of the protesters were wearing masks to help prevent the spread of coronavirus but social distancing that was promised by organizers didn't seem possible amid the sizable crowd.

Fox4: Hundreds of protesters march to steps of City Hall with list of changes they want to see made in Kansas City