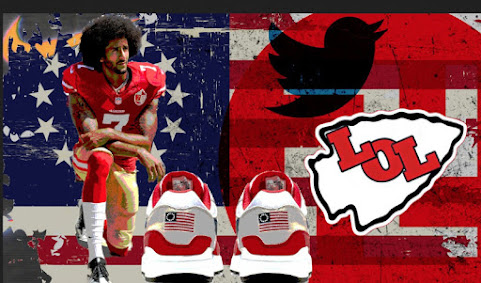 The newspaper speculated that controversial sports star would make a good fit in KC.

From the NFL's website: Could Colin Kaepernick return to the NFL? Five logical team fits . . . KC quickly falls out of the top 5.

Even after social justice protest across the nation, many teams still few the protesting QB as a distraction.

Moreover, Kansas City has a championship QB and a capable backup. We're good.

And so, once again, the newspaper was caught pushing a political story that fell apart.

He sucks and he’s too old now and besides, he don’t need the money, the Chinese owned child abusing Nike has his back, he’s making big money being a whiny chud spokes person who’s done nothing to improve the real problems plaguing the koloreds.

I am calling for the Chiefs to be Asians only, As Asians are not represented as NFL Players. Mostly because they are not Felons in the National Felon League. As an Indian, the use of chief name and indian signs by blacks are offensive and not pc.

I CANT PLAY WORTH A FUCK PLEASE SIGN ME

I have little doubt he'd be a better backup than Chad Henne. This just makes sense as a football move.

^^^^ wrong, The guy is a cancer and would destroy the team plus he’s old and worthless so....

He ain't good enough to make a Canadian team.

A lot of people don't even want the Chiefs. DeFund the team I say.

I still want to get my mouth around that piece of 12" Alabama blacksnake.

A lot of people don't want the Chiefs stupid dave? Really? You don't live in KC so first of all nobody gives a fuck what a shithead, non-resident, Boomer like you thinks about them. Second, millions of people love the Chiefs, millions dummy. Why don't you die like chuck did?

Stick a fork in the Commie Chiefs !

Go spray paint Arrowhead Stadium with Black Live Matters down the side and on the football field.

Homey Clark Hunt is down with the revolution !

Is Chuck really dead? Can anyone verify if this is true?

BLM and ANTIFA need to set up camp at Arrowhead Stadium on opening day.

Get their message out to 70,000 working-class white people spending their children's college fund to cheer the NFL multi-millionaires on the field.

I saw Chuck down at Liberty Memorial wearing a leather vest and chaps riding Boomer Hater hard and long.

Brilliant idea for a career move, either by him or his agent. No longer good enough to be a starter, create a circus side-show to keep your name in the news.

10:37 admitting he's boomer hater. I could care less about the Chiefs 8:51 and your claims of millions is the typical kind of things a real idiot would speak while not able to back any of it. Only stupid people born from a incestuous relationship would wish death upon people as you do all the time.

8:51 please do us a favor and move the hell out of Kansas City if in fact you do live here before other people think those of us who live here are like you.

BFD, so Dave could care less about the Chiefs. At least he can says so under his own name unlike you 8:51 whose is nothing but pussy who can't admit to what he says.

I like the Chiefs but could care less about the Royals, hate to hear what that makes me.

Both teams should no longer receive any tax dollars and should be held responsible for the stadiums upkeep or else pay very high rents for such to be done. If ticket prices get any higher I will stop going to see any of them play.

^^Who gives a fuck what YOU think CHUD?

Practice what you preach 12:20

^^Nah, you care what I think CHUD. You cared enough to post. Now get your shinebox!

Since Kansas City and the Chiefs already have the TOP RANKED QUARTERBACK IN THE NFL presently, maybe, no, we don't need or want Colin Kaepernick.

Go look it up. Google it. Learn what it is and then stop it. Stop doing it. Post after post. Day after day.

Who needs Kaperdick when you have Patty Cakes taking a knee?

Patty Cake's butt boy Kelce will be taking a knee right beside him, because you know, this country has been so horrible to both of them.

Meanwhile Fat Andy will be eating a tenderloin on the sideline while they play the national anthem.

if he's managed to stay in shape and game-ready despite his sabbatical or banishment or whatever from pro sports, then, damn, isn't it obvious that that is precisely the skill set needed for a backup QB? maintain physical and mental readiness despite not being actually used in-game??? if he's available and cheap I say sign him who gives a damn what he thinks or how he votes he's a quarter back not a governor and Mahomes isn't invincible and no disrespect to our backup who played admirably e.g. competed, close loss to Green Bay, we could use a better backup.

Race-baiting is only officially approved for woke-scolds. When will he learn???

It has always been about disrespecting the flag and country. Read Kap’s initial explanation for the kneeling. He hates his country, end of story.

^^^and yet not one thing you said is true. Weird.

Kneeling before the flag is the same thing as flipping off the flag. They both should be detested by anyone who loves this country and remembers all those brave soldiers who died defending that flag. If you want to kneel, do it on your own time, not company time. And if the boss says it's fine to kneel on company time, both of you should immediately move to China and see what a wonderful land of opportunity looks like.