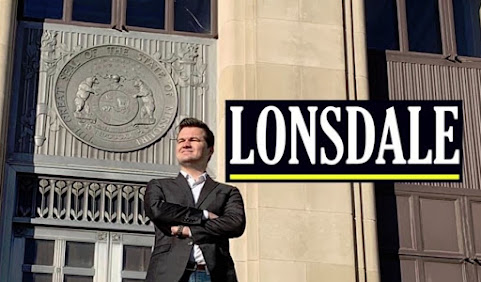 Apparently, whilst most college students are busy doing keg stands and/or "exploring" a great many facets of their identity . . . Chris Lonsdale didn't look like he was having any fun at all and instead was called out for mimicking talking points from garbage cable news.

And so, here's an episode that has raised eyebrows among Clay County Insiders . . .

"As treasurer of the Young Americans for Liberty chapter at the University of Missouri . . .  Chris was escorted out of a student government meeting for claiming that a candidate ticket tried to rig a disputed election."

"Mizzou Young Americans for Liberty Treasurer Chris Lonsdale was escorted out of the meeting as he was speaking. He was holding a cardboard sign that read “Tori & Riley Rigging Elections Like Hillary.” (Personal attacks violate Senate decorum, Speaker McDaniel repeatedly warned the room.)"

The stereotypical college Republican flexing seems pretty harmless but the REAL behind the scenes criticism of this young dude is that he's horrible at politics, inadvertently comes off arrogant, not yet polished at constituent relations and seems to think a bit too much of himself . . . And yeah, it's establishment Republican elders across the bridge who want to put a shoe on Mr. Lonsdale's otherwise promising career . . . Not that it would be a great loss.

Also, there are debatable social media photos of the young man working around social media that are unconfirmed and look out of context but it's all mostly gossip from a group of Conservatives who simply weren't impressed with the dude.

"Clay County has enough problems . . . Without this guy and his attitudes."

More to the point . . . The college journalism reference and rumors serve as a reminder that even meaningless down ballot races earn meticulous research in the era of the Internets AND Kansas City politicos on both sides of the aisle aren't very excited about the activist ambitions of Gen Z.

He seems okay to me.

But Clay county is still garbage. Have to agree with TKC about that.

Hey, I'm all for young Republicans. They're the only people who even bother to study at college!

What a bullshit hit piece. The world and KC would be a better and less racist place if the Democrats would do this to their own...because they are the real problem.

Leave this kid alone. Let him fail or succeed on his own.

He's a man running for an election. Not your son. Give it a rest. Republicans eat their young, that's the way it works. You can't run for office until you're 70 in the GOP. It's a very long line.

And he's a nothing pal of Worthington. Write him off immediately. This douche needs to get out of the Alex P. Keaton era and learn that he has to smooch Jeff Roe's booty properly, gently and with much vigor. Without doing that, he's going nowhere in Clay County.

Sounds like a "Chip off the Old Ridgeway", doesn't he?

If you were informed you'd know I've endorsed this kids opponent.

If I were informed I'd know who the heck you are.

Who the heck is Jason? Jason Voorhees? Some random schmuck?

Oh just checked out the FB, what a goofy looking dude

Wow ! That's one psycho-looking tranny at the bottom of the page ! Another angry tranny "journalist".

Why not focus on topics. Seems like the incumbent has nothing to run on. Childlike.

I wonder why "Kayla" (formerly Mark) Schierbecker looks so angry in "her" photo ? Why are trannies so angry ?

I'm not sure how this makes the kid look bad. causing trouble for the dweebs in student government is pretty funny. Has my vote!

^^ Then you're voting for the "Lead Dweeb" who's butt-hurt because he can't get into Student Government.

I've been told this dude harassed several girls in high school. There are some tweets about him when he was in college that may even curl a libs toes. He needs to do a lot of growing up before he runs for an election in a disfunctional County.

Clay County has enough issues without some hot head kid who still lives with his parents. Maybe someday he'll make a fine politician but not now.

Great another mediocre line up for County Office

Tracy - Queer Redneck from Holt who fucked everyone in assessments last year. (This guy should run for Joe Exotic's Boyfriend)

Chris - Some loud mouthed 20s something punk with an overpriced degree.

Bill - Some doofus who isn't even running his own campaign.

Clay County really offering up some real winners. Any candidate that bald doofus jason endorses is a major Red Flag. Guy literally knows nothing about anything and is just a drama queen for attention.