ANOTHER KANSAS CITY NIGHT OF PROTEST & MARCHING ON THE PLAZA AMID MORE CALLS TO DEFUND THE POLICE!!! 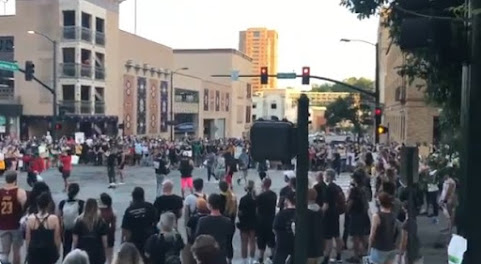 Tonight a mostly white crowd shuts down traffic on the Plaza in the ongoing march for social justice and a crackdown on law enforcement . . .

The crowd also came together to sing the Black National Anthem, “Lift Every Voice and Song.”

This evening's festivities started near the soon to be renamed J.C. Nichols fountain wherein protesters theorized that defunding police would allow homeless folks with drug problems to receive care and treatment rather than arrest.

There are least 1000 people on the scene and protesters shut down 47th Street as the make their way through the plaza tonight.

Volunteers are controlling traffic and police haven't interfered with the protest so far.

I guess they didn't sing the national anthem.

So much for returning to business as usual on the Plaza.

THIS is business as usual.

Go home thugs. It's getting boring.

The Plaza is just another in the never-ending list of casualties of our disintegrating society.

Whatever you give them, it will never be enough. Never.

personnel are the problem, maybe starting at the top.

How long are city and county "leaders" going to allow the Plaza to be held hostage? Businesses that were already hurting from closings caused by COVID-19 are now being affected by lawless groups of people that, in reality, don't give two flips about social injustices. People cannot enjoy a meal or an evening walk in what was a pretty great area to do those things. At what point is someone going to say ENOUGH? People who follow the rules and respect authority are sick of this shit. And before anyone's head falls off, this does not mean it's okay to brutalize anyone. It means it's time to start acting like civilized human beings. Look at Atlanta tonight, a fast food restaurant has been torched (for NO reason) putting people put of work, a major thoroughfare is shut down prohibiting people from getting to and from work, their families, medical facilities, etc. WHAT THE HELL???

Stick a fork in the Plaza. Virtue signalers are at work. Nichols built the Plaza.Idiots want to destroy it. Good. More tax dollars for Johnson County Ks The Detroitification of Kansas City is well under way. If anyone thinks the Plaza will return to normal after this think again. Wait till the City coffers are empty and they try to raise taxes much highers. I'm laughing at this now. They deserve all this because of the utter naivety and stupidity of KCMO voters.

Please defund and do away with the police. My friends (ex-military) and I will be glad to immediately respond to any serious lawbreakers. We will work for the cost of meals and training ammo. Seriously. And if you won't consider this now, or think its silly, please be aware that in 30 years this will be standard across the USA. Police can't deal with gangs or drug cartels. Police are outgunned. Let retired military handle it. Please!

9:44 has seen too many crappy Schwarzenegger movies from the 80s.

Meanwhile, Wilford (9:31) continues to mindlessly repeat himself and obsesses over the term stick a fork in it.

In the history of protest movements, success only comes when the aggrieved party masses the necessary numbers of their group into action. This current movement is a Black Lives Matter movement, making the claim that law enforcement unfairly targets people of color. White people should stay home, as they're only getting in the way and diluting the message from Black protestors!!!

After Atlanta starts rioting, it could be volatile everywhere.

If Atlanta goes big--not clear if it will--the effects could spread.

In other words, antifa forces conducting advance reconnaissance at the Plaza....

Put a fork in the Plaza: as well as Kansas City.

KCPD could clean these protesters out in 30 seconds if everyone would nut up and get their balls out of their wives purses.

I think everyone is fed up with these UMKC wippersnappers and their douchebag professors.

They are doing the right thing.

And a lot of people support them.

When Devolution becomes the rule. We have support for thugs.

Besides, nobody above the age of a worthless umkc college student gives a fuck about any of this bullshit.

And by the way gopher boy, where’s the Kung fu flu recovered numbers for kc? Be a good pr person and get the word out for us ok?

How the fuck is it that these cocksuckers can just shut down traffic? I’m a taxpayer and I pay to use the roadway. They have a right to peaceful assembly. That doesn’t include inconveniencing me especially if I don’t agree with their point of view. Fuck this. I’m okay with all police officers standing down until further notice until law abiding citizens decide if they support them or not. If not then everyone for themselves.

Mayor 10-10-10’s on-the-job learning about par for the course.
He doesn’t have a clue about business.

Lumbar companies across the city readying good quality lumbar to help board up Plaza buildings.
High luxury condos getting ready on paper for section 8 housing.

As Dr Rex and Mayor 10-10-10 prepare to shut down the city of fountains for a second wave- Johnson County salivates as it ponders closing the border as Antifa prepares for KC takeover.

Move while you can. Scary times.

like trying to rob the KC zoo instead of fort knox.

I hope so. Got an itchy trigger finger.