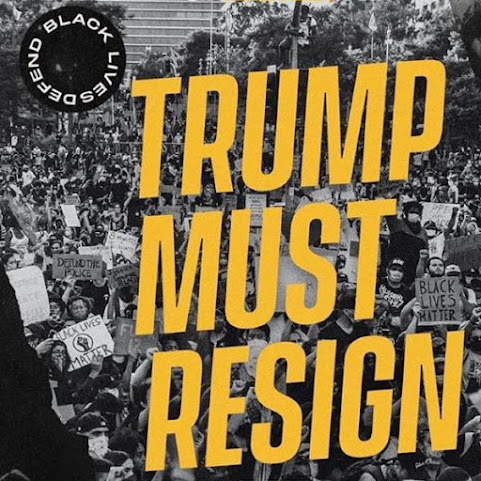 One Struggle KC has reemerged as a local protest leader and they have become more strident in their demands.

The group led many of the demonstrations on the plaza and now they're pushing for Prez Trump to resign.

"As we took to the streets in protest against the rampant scourge of police violence, Trump gave elected officials around the country the green light to “dominate” us with those same out-of-control police forces. He took the extreme step of using the military to face off against civilians. He gassed us for a photo-op. His recent declaration, “When the looting starts, the shooting starts,” has put every protester at risk . . ."

KC is done BLM is done

Dear god these people are insane

Donald Trump should resign, but he won't because he has no integrity.

He should have been removed by the Senate, but they wouldn't because they have no integrity.

Only voters can save us from what voting has wrought.

Vote Blue like your lives depend on it, because they do.

Yes Byron and you should be in jail wearing orange.

If anyone needs to resign it that flake Lucas who is masquerading as a Mayor.

The children need to shut up, grow up and work for a living.


This is how ignorant Byron is....

60 shot, 9 fatally, so far this weekend in Chicago

Here is what BLM should concentrate on as well as black on black murders in every city in the nation day after day. No money in that. Total shakedowns of city and corporate sign ons to their bandwagon..

Thank God Trump is in office at this time and will get a 2nd term to keep this country as stable as possible with the lunatics running rampant! Imagine any city with someone like clinton or biden while this nonsense is going on! Lawlessness is the lefts desire and it will be important to be armed and protect yourself should they ever regain power.

The koloreds wont admit that they are the problem with the kolored community today, they’ve been scamming the white community for free money for 100 years and if they fix their problems then there’s no money from whitey, don’t think for one second that the kkkdemocrims want to let go of their racist ways either, they have and will continue to hold them under their feet. They’ve been pissed off since the great Republican President Lincoln set them free, that’s why they killed him.

Byron should grow a pair instead of typing all day. You are one annoying piece of paranoid shit.

All of these people that are disrupting our lives need a good bitch slap. Start with Lucas then Byron, then Forte, then line up all of these stupid demonstrators. They are the problem. You go out and cause social discord and expect that everything is going to go your way? Idiots, we are surrounded by Idiots.
Heather Hall for Mayor.

I demand that all revs in the city be replaced by good old country boys.

Byron apparently has the ENS problem which recently started in West Virginia according to CNN. Empty Nutsack Syndrome.

Someone emptied their nutsack in him

Why should Trump resign? The Constitution specifies a four year term and we only one example of a president resigning in U.S. history and that was not because political partisans who supported his opponent could not accept their loss. The Constitution does not provide for do overs for sore losers. To yield to such pressure would only further weaken our republic. Integrity requires that Trump serve out his term and not anything else.

Looks to me (and most folks), the "rampant violence" is black on black. Fuck BLM AND ALL WHO FALL FOR THEIR BULLSHIT.

I think these protestors have bought into the idea that black criminality is somehow white peoples' fault. They'll see that when the blacks get what they want, they'll suddenly want something else.
Shut up already! Your problems are not my fault!

Fuckhouser amounts to nothing more than a mentally Ill leftist worthless piece of garbage. The only cure for these criminals is a firing squad or mass hangings for every fucking one of them

Oh Byron, YOU of all people lecturing anyone about integrity is just comical and a complete farce. YOU who stole welfare benefits from the federal government for years by FAKING being disabled so you wouldn’t have to work! That is the lowest of the low. It’s not as if you parked in a handicapped parking space for five minutes. You DEFRAUDED the government by PRETENDING to be disabled. You have no place to question anyone else’s integrity or ethics.

So using the logic of One Struggle KC, Trump forced Dem run cities where riots, looting, and arson occurred due to BLM protests were his fault because police were there doing their job. That's rich. You can't be taken seriously using reasoning like that.