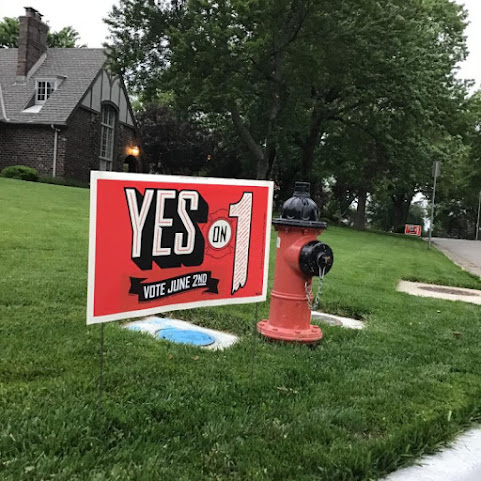 Kansas City union political power has been reawakened amid the coronavirus pandemic and the result could be a significant cost of living increase according to tax fighters.

EVEN THE MOST STRIDENT OPPONENTS OF THE FIREFIGHTER SALES TAX INCREASE ADMIT THEY'RE TOTALLY 'OUTMANNED AND UNDERFUNDED' IN THEIR STRUGGLE TO FIGHT QUESTION ONE!!!

"The pandemic isn't stopping this campaign to tax Kansas City to death. We're seeing a more aggressive ground game and KCFD supporters really making this a practice run for the November election. Basically, the Missouri Democratic Party infrastructure is testing their systems with this small municipal election that has multiple command centers, hundreds of poll workers and a mail and telephone campaign that looks to me like it's funded in the mid-six-figure range to start. They've got an army working to pass this tax. So far, we've seen just a small smattering of opponents willing to speak out against it. It really is overkill. I hate to be a pessimist but this could be a 30 to 50 point victory."

And so, locals looking at higher sales taxes should adjust their budgets accordingly given that even the most strident tax fighters seem to be giving up at this early stage of the game and in an election they're calling "rigged" in favor of political special interests  . . . Meanwhile, union advocates cheer the resurgence of American labor voting in Kansas City.

Or course it's rigged.

If there was anyone really in charge they would delay the election. Instead, they're having it to take control of the vote.

KC democracy was the first to go.

We had Democracy here?

That must've been fun!

This looks like just more of the same special interest politics we've seen since the 30s. I guess this is why so many are still looking to move out of KC.

Really horrible idea. Raising taxes on residents in the middle of a pandemic. No mercy on the poor and the working class. Just another KC money grab.

Higher sales tax, higher property tax, E-tax, water rates that are double what they are anywhere else in the area, Kansas City is going to be the most expensive place to live now.

And what do you get for your money? Crime, corruption, crappy schools, crappy roads, crappy services, etc.

Why would anyone live there? Kansas City, once a very nice, inexpensive place to live, is now like every other Democrat run shit hole of a city.

You think taxes are high now? Just wait until they find out how much lower their E-tax and sales tax revenue is due to the stay at home rules. We won't be paying it, my wife has been working from home in Johnson County, not her office in KCMO.

Wonder if the folks who put the yard sign up next to the fire hydrant tested it to see if it actually works.
That system suffers from the same lack of maintenance and oversight most everything else in KCMO does and it's regularly found out that no water comes out of them when the trucks arrive to try to put out a fire.
Maybe Lucas could take a minute or so to address that during one of his endless ponderous covid speeches.

As always, when one side of an issue up for voter approval is professionally organized and well funded, and the other side is not, the former will win. The merits of the matter are totally irrelevant.

It is only the poor people of the East side that continue to vote against their own interests.

In typical democrat fashion, the fire fighters aren’t gonna miss this chance to capitalize on a tragedy, or in this case a pandemic. The rest of the human beings on planet earth have to sacrifice for a minimum of a year if not more but not these greedy S.O.B’s.

They’ll survive without this devastating tax on the citizens, they can get by just like the rest of us have to.

Greedy democrat union slobs need to suck it up and quit being crybabies.

Of course FF’ers deserve a raise and better pensions.
The Mayor makes more and that’s a travesty.
His best idea is 10-10-10 and that will lead to higher taxes.

As people abandon downtown and get out of the 1% Earnings tax- let Lucas be the National Poster child for failed learning on the job.
At least he didn’t bankrupt a carwash or pull a Frank White on not paying his house payment on time.

Only in Kansas City do people hate firefighters. Any other city, they are respected.
Here, they have no respect, with good reasons.
Here, they sell guns to criminal hood rats. (Captain James Samuels) They hose down homeless people in freezing cold weather. (some typical chickenshit ff) They severely beat women in road rage incidents (Pleaze Robinson)

They deserve nothing, except to all be fired and replaced with honorable people.

You forgot to mention the gay firefighter that spit on the kid at Hooters.

With companies now seeing employees can be just as productive working from home; more people will choose to leave Kansas City for smaller towns without the outrageous property taxes, earning taxes, and water bills.

Kansas City government will follow the path of the Kansas City Star by alienating over half of its constituents who will choose to leave then live under Democrat Party corruption and high taxes.

Once a day they fire up the pumper truck, turn on the sirens to make sure they still work and go racing to the grocery store to restock the fire house pantry. I lived next to a fire station and they didn't do shit all day / every day but fuck off.

Police officers should be paid twice what firefighters are as they are actually working and risking their lives.

If firefighter's aren't respected, they are to blame take two examples in the last year: 1) the firefighter caption who was selling illegal guns from a KC firehouse and 2) the firefighters juggling their vacation and work hours to increase their overtime pay and earning significant six figure incomes as taxpayer expense. That deserves respect?

Also, I am a "firefighter caption."

I will vote YES! Because I support our firefighters and I want the best for Kansas City.

These comments do not represent our city. We want our first responders to be well protected, well equipped and safe.

Look, I know life is really hard from your work at home job. Unfortunately these poor bastards are out in the fucking trenches dying of Covid. So the biggest thing that you have to worry about is how you’re going to get a haircut, they have to worry about getting fucking sick and dying. Please try to think of that and realize that having the shit they need to do the job might go a long ways to helping.

This money is NOT going to firefighters if their ever is smokescreen this is it. City Hall will just spend less from the general fund for the fire department and use this money part of shell game to subsidize the new downtown convention hotel. Suckers.

They already have the shit they need to do their job. Buy a fucking box of masks like the rest of us have that work with the public.

Quit overcharging overtime to make your pension benefits more when you retire. Taxpayers are tired of paying for people to retire at age 50.

Taxpayers also don't get paid at their job to sleep and watch Netflix all day either like firefighters do.

VOTE NO to more taxes.

10:33 you are on the money. Leaving Kansas City and not moving to Kansas City and not spending money in Kansas CITY will be the new normal.I stated this several years ago .Just this week a,Person from Arizona stated on a program that her water bill was 24 dollars a month .Kansas City Missouri is price GOUGING. Go spend your tax dollars in a small Missouri or Kansas town. The Blue City's are destroying themselves. Look at the City's on the East and West Coast. And Chicago. People are leaving in droves.

Then why can’t they fuckin spend our tax dollars on infrastructure, police, and other necessary things to have a safe and productive city instead of toy trains, overpriced hotels, renaming streets, and other dumb ass social welfare programs. You dumbass democrats don’t seem to think things through.

Greedy Democrat Firefighters Union continues to waste money and want the taxpayers to pay for it. Vote NO !!!!