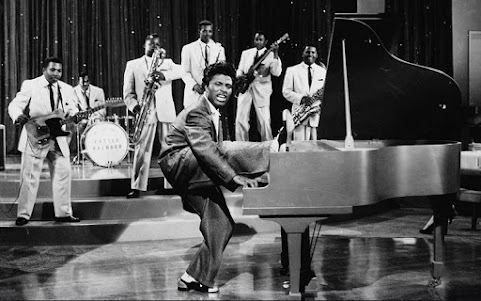 Rock & Roll fans all around the world pay tribute to the memory of Little Richard today.

Here's our favorite headline so far:

SLATE: Little Richard’s Music Was Dangerous, But So Is Freedom

RESOLVED: LITTLE RICHARD RECORDED THE "KANSAS CITY" SONG BETTER THAN ANYBODY ELSE!!!

Admittedly, I'm partial to the Wilbert Harrison version but here's an alternative argument . . .

One of our favorite former KCMO Council members offers an important note regarding the Kansas City connection rock 'n roll history and the passing of a legend today . . .

"Did you know that Little Richard recorded one of the very best renditions of "Kansas City" . . . He recorded two versions of the song In 1955 and released Kansas City Hey-Hey-Hey In 1959.

"In 1964, the Beatles, who adored Little Richard, also recorded his version of Kansas City."

And this inspires our playlist tonight and TKC tribute to Little Richard tonight . . .

Richard's version had the greater musical impact, so the credit is deserved.

They're both fine songs.

But Kc needs an update!

^^^ You can't reinvent the wheel. Sorry.

No it wasn't the best version.

People with zero actual music experience or training telling others what the best of is.

^^^^ If you have heard music, then you have "musical experience" sorry but you've obviously never heard professors talk about music. They ruin it even worse than the old codgers on crap blog.

Little Richard was the real KING of rock & roll. Sorry Elvis, you were always just the great pretender.

Elvis said he was not the King.

The only King was Jesus the Christ.

So true Jeaus Christ it is

Stereotypical Homosexual behavior. We all can agree on that.

And yet we can't. Weird.

Pretty appropriate version, according to the lyrics, the singer loves someone who is in Kansas City, so he's going there to get them the hell out of there!
A sentiment shared (and acted on) by many, many people.

Weird. Because you mirror him. Weird.

Jesus Fuck on a crutch kings are despotic hereditary dictators but you clowns seriously want the great prophet Jewsus to be a king.

OMG another one of Kansas City's very own passed?

^^^ None of our very own as the local media likes to say live here. If they do it's not for very long.

It’s the gays anthem since kc is full of them

^^^Says the closeted gay who’s thirsty for some gay dick.

The Beatles' version is best.

Actually, Frank Zappa had the best version, but he never recorded it.