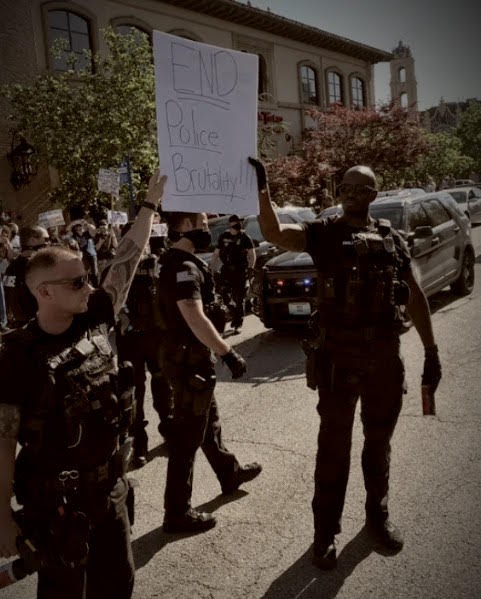 An iconic shot is working it's way around Kansas City social media circles and might be the most effective "community outreach" we've seen during this protest movement so far.

Credit to @quartzkoi for this amazing photo that he's sharing with news media in KC and around the world.

Or mabye his ass.

Almost all Americans agree that what happened was wrong.

WE'RE A BIG CITY TOO!! WE CAN POSTURE IN FRONT OF THE COPS FOR 3 MINUTES!!

WHAAAAAHHHHH!! MY EYES ARE IRRITATED I NEED MILK!!!

Leave this kind of stuff to the big boys KC.

So much for all that crap you wrote last year about respecting the blue.

This is the dumbest comment I’ve seen in 2020. Good job

Welcome to Tony's Content Stealing and Utter Misinterpretation of Fair Use.

The Truth Regarding Police Shooting Blacks Vs Whites
Again, I don't think any decent human being doubts that the recent death of George Floyd was anything short of tragic. I sincerely hope that the psychopathic cop gets the punishment that he clearly deserves. However, when the actual statistics are revealed, this continuing narrative that the police are senselessly shooting (and/or killing) more black people than white people, doesn't add up.

Here is the actual data taken from 2017:

In 2017, 62% of the US population was white, and 59% of all violent crimes were committed by whites, which is 3% LESS than the representative white population.

In 2017, 12% of the US population was black, and yet 38% of all violent crimes were committed by blacks, which is MORE than three times the representative black population.

In 2017, MORE than twice the number of white people were shot and killed by police than blacks, despite the fact that blacks were significantly over-represented in terms of being arrested and committing virtually every type of crime.

Police brutality and unnecessary force needs to end for ALL races, and yet all we are hearing and seeing is blatant, intentional divisiveness by perpetuating the myth that most white people are privileged, evil and racist. This struggle will never end unless we see through the lies. We need to come together to defeat these issues, otherwise we're done for good as a nation.

one can only hope

After being pelted with rocks and bottles from protestors, officers commandeered a sign, warning that if it didn't immediately cease, they would respond in-kind!!!

TONY...REIGN IN YOUR COMMENTATORS. NOW WITH DRUMPS EXEC ORDER YOU CAN BE RESPONSIBLE FOR THEIR POSTINGS....GOOD LUCK WITH THAT. LAWYER UP!

Has the KCPD had the same training as the Minneapolis PD on how to jump in their cruisers and retreat like cowards when the SJW come calling at the precinct? Weak City leadership tied their hands and gonads in submission. Shouldn’t retreat until out of ammo. That is how you serve and protect.

It's fair use. Good for TKC to provide the link but the guy is sharing it with all of the news agencies for free. He's giving up his copyright.

Proud of my KCPD!