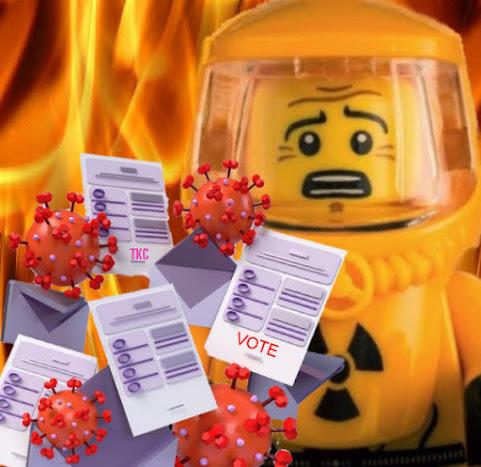 The June 2nd election might be the most hotly debated vote in Kansas City history as politically charged locals emerge from the lockdown.

To wit and despite the historically low turnout affair . . . 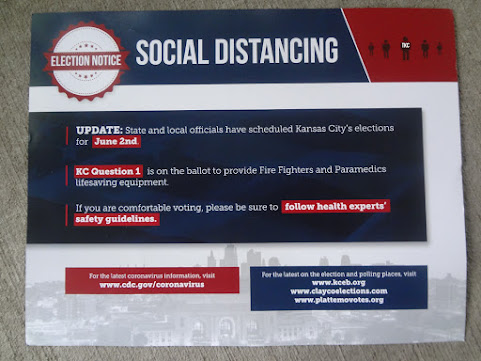 "Too scary to go out and vote for this money grab? NO! VOTE! This is really one of the dirtiest mailers I've ever seen. They had a chance here to take the high road and ask people to vote to protect fire fighters and support some of these very brave first responders. Instead, they started off in the gutter and want to highlight the risk of going to the polls. Sad."

To be fair, there are some very helpful hints on the flip side of this mailer that would benefit voters no matter their political leanings. 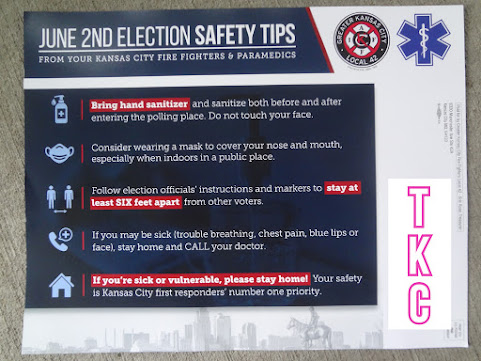 Forgive us for trying to offer an alternative from cynicism despite hundreds of millions of dollars at stake.

We want to believe that money isn't the only motivation in politics and even the most powerful leadership in Kansas City cares about the health of EVERY voter despite the chance of political opposition.

Never mind that this EPIC FIREFIGHTER SALES TAX INCREASE VOTE might be decided by a tiny fraction of the electorate compared to the much larger number of taxpayers on the hook for a higher cost of local living overall.

Certainly, the discourse in this cowtown can't be as divisive, misanthropic and misleading as the struggle for dominance currently underway at the national level.

Was it a nasty mailer?

Yes. And I agree with your commenter. This should be an easy campaign. The firefighters are the only good guys in all of this and they are helping people survive.

But I think what you're underestimating here with your not so subtle snarky blog post is that the FD is up against some very angry opposition that don't care about the health of the community, they are just out to win. It's a small group of people and if they get their way, the rest of the city will suffer.

IF the city would stop wasting so much money on hotels and streetcars, maybe they would have enough cash to pay the firefighters without raising taxes.

Glove up, mask up and go vote!

It's good practice for November.

Yeah let's give 'em more money so they can go load the fire truck up with groceries everytime they work.

^^Yes, CHUD they have to eat. I mean I know that's hard for your rapidly decaying mind to fathom, but it's true. Now go find something else to cry about. I'm sure you will.

Quoting the firefighters, if not for the trips to Price Chopper and chasing ambulances the fire trucks would have few if any miles on the vehicles. The firefighters do not keep social distance or implement other safety precautions related to the pandemic. The fire station staff continue to have BBQs at the stations with friends and family and without social distance and without masks. And one wonders why the "safety" staff are at risk. The vote is nothing more than another sales tax increase. Instead of funding fire from the general fund the sales tax will serve to supplement the general fund.

The fire fighters and the union see the city as nothing more than a cash cow.

Mamma said "life is like a box of chocolates".

My Depends is like a box of chocolates right now.

"I am in my basement rubbing the hair on my legs up and down".
"I want to be your President".

^ And the waste and corruption enables and validated the right wing fringe.

But let's not forget the most expensive and least needed corruption that the right wing favors:
KCI new terminal.
To be fair even the Sierra Club signed off on it for a few peanuts.

I like to finger bang interns because I can't get it up like the man from Nantucket.

Raising sales tax during a financial meltdown is about as irresponsible as you can get. The city already spent 3.25 million to buy new equipment.

The firefighters should be ashamed of themselves for allowing city hall to hide behind them for this regressive sales tax increase. Police and fire departments should be paid from the general fund that is funded by earnings tax but some how the general fund is being used for convention hotels, entertainment districts, parking garages, sports stadium funding and many more pet projects of the Mayor and City Council. Vote NO on the fire safety sales tax shell game.

You people also forgot about the recent 7.5% water tax increase, of which 5% goes to the city and only 2.5% goes to the water dept. Jackson county raised property taxes through the roof and Troy has already came out and said to expect them to go up again. idiots will vote yes because they have short memories .... until they can’t afford to live here anymore.

Just these two taxes from water and jaco will go up at least 22% comibined,

Do you really want to add more taxes at this point? I don’t, I can’t afford anymore tax increases and just wait until these taxes start reflecting in the free or cheaper rent crowds monthly rent. Nobody is taking any of this into consideration at this point.

Too many money suckers after out tax dollars, while not allowing us to work, says this issue should be voted against. No matter where you work, something is always needed, but you get by without it, and so can they.

Why do people still live in KCMO proper?

Seriously, another tax increase when there is 20% unemployed?

We already pay KCMO a lot in taxes that is SUPPOSED to go to Fire Department Services, Police protection and sewer and sanitation. Where the heck is that money going?

Fire Department needs to raise its minimum retirement age on its Pension Plan to 62 years old as you have folks retiring at age 50 and taxpayers are supposed to pay for them a life of leisure for the next 30+ years. It's frick'in crazy.

KCMO's various pension plans are killing public services to the very taxpayers who pay for these services. End the pension plans and implement 401k plan like the rest of us which would cap the City's exposure to pension benefits.

Other than showing up at car accidents and scratching their balls watching EMT guys do their jobs, firefighters have little to do with current safety codes and sprinkler systems within high rise buildings. Occasional meth houses catche on fire.

^^^^ and you know this how? Maybe you should have a matlock marathon at your trailer!

Then read MY words: Vote NO on this issue!!

KCFD recently got millions for equipment. Now they want more. Meanwhile they bleed the City’s general fund for their overtime. Why is the highest paid City employee a Local 42/KCFD guy making nearly $250k per year? Answer: Overtime scam.
Vote No, no, and Hell No on the Fire Safety sales tax.

No more taxes, period! Take funds from some of the frill projects that only affect a very small percentage of taxpayers!

Sadly -- or nobly -- if any of these fools who are so offended at having to pay a small amount for the needed protective equipment actually found themselves in need of the services of the KCMO FD, one of our firefighter/EMTs would haul their sorry, ungrateful butts out of danger anyway.

Shut up Phil, your wife is the worst and last person that should involved in any financial decisions

Hey Phil, did your wife forget the other two or three thousand city employees that work with the public more than kcpd and kcfd does? What’s she gonna do for them? NOTHING, just like she and her ilk have always done. So before you get on your high horse about kcfd maybe some consideration for the hard working folks out in the field all day.

One other thing Phil, we all know this is a scam, city hall is going to do what they always do, steal the money for their pet projects, you know, like the 7.5% tax increase for water that city hall is taking 5% of. Effing lyin cheatin crooks.

You know, maybe the fire dept can suck it up for a year like everybody else has too.