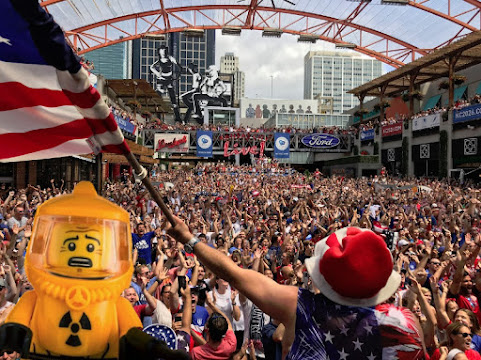 At times, City Hall has been forced to subsidize nearly $20-MILLION a year for the P&L District but that figure has been reworked, massaged and manipulated more times then a downtown bar fly. Still, tax fighters have long contended that this is one of the worst deals KCMO has ever negotiated.

Accordingly, a great question caught our blog community at the PERFECT TIME . . .

"If the normal revenue shortfall for the Power and Light District is around $14-million… what in blazes will it be this year???"

A quick text earned a surprisingly speedy reply from insiders at 12th & Oak . . .

"North of $23-MILLION and no less. Surprise, we don't have it! So we'll have to restructure the debt again . . . Yes, thereby prolonging the payments. This isn't the only project that will require that either. If we don't get at least some of that CARES Act money, we're talking bankruptcy in about 7 years . . . Unless there's a total and rapid return to previous revenue levels which nobody expects."

IF they wanted to actually make some money, they'd turn it back into a parking lot.

Absolutely NO stimulus! Suburbanites will just have to find somewhere else to go... like their own town/neighborhood.

The beginning of the end of downtown!

Thanks Q, we luv you Xi, bankruptcy lawyers and the globalist bankers.

NO, NO, NO, this is all wrong. KC needs MORE free stuff. That will fix everything. We just need to spend more money!

One of the worst deals ever made. By the time the city is finished paying, it will be starting to fall apart.

I have it! A new downtown statium will fix everything!!

and, no, things are not going back to normal in a couple of months.

Vote No on the regressive fire safety sales tax increase.

SHUT THAT FUCKER DOWN! U.S. GOVERNMENT IS 5 TRILLION DOLLARS IN DEBT SHORT OF TOTAL TURN THE LIGHTS OFF/CLOSE THE DOORS BANKRUPTCY. ONCE THEY HIT THAT 30 TRILLION DOLLAR FIGURE PEOPLE NEED TO PACK THEIR BAGS/GET IN THE CAR AN START DRIVING. WHEN WE HIT THAT, REST ASSURED THERE WILL BE NO MORE AMERICA AS WE'VE KNOWN IT. INTEREST ON THAT DEBT WILL DESTROY THE SAFETY NET AND EVERYTHING WITH IT. KEEP GOING TO THE WELL PEOPLE. SHUT P AND L DOWN AND LET THE CONMEN WHO RIGGED THIS DISTRICT AND THE FINANCES GO DOWN WITH IT. THE MONEY GRAB NEEDS TO END NOW!

This isn't a mystery. No sales tax, no sales tax to pay Power & Light. Quinton Lucas continues to call the current situation a "blip".

We don't need more parking for empty office buildings & hotels. How about housing & community use?

GHAAAAHK! NO! It's too fucking BORING out here in the burbs. Our families fled the KC races years ago but we still need you to entertain us, we're too boring to take care of ourselves.

That's right! Stimulus free money is only for rich corporations who don't even need to use it to save jobs. It's not for real people, only for corporate people. Yay Trump! Yay Pelosi!

Yes, I noticed the cities all have right wing critics who have some valid points about corruption and wasted money.

And I've noticed that from the other side of their mouths these same right wing critics hate poor people and support wasting trillions on weapons and war and corporate bailouts but spending as little as possible on health care for the people, even in a pandemic.

Why not just raise the sales tax and or the property tax rate. That should take care of any shortfall.

Actually we could easily turn P&L into an audience participation stadium for The Hunger Games.

Face it, den run cities all eventually end up crime ridden cess pools run by race baiters and hucksters who care only about lining their and their cronies pockets and care nothing about the city or its people..

4:09 You're not as clever as you think with that ignorant shit.

422 Bryon, stop with the ad hominem attacks and just tell me how I am wrong.

Yes the cities are run by hucksters. But the Fed is also run by right wing Dem & GOP war mongering hucksters who suck trillions in tax money from the cities and blow it on regime change wsrs and endless wars. And then they give new free trillions to the same wealthy corporations. But we're supposed to somehow ignore that giant sucking sound as if it's not happening.

So shut up with the double talk, mkay?

But if you want to see an actual cesspool check out the waste lagoon at your nearby rural factory "farm". It stinks up about 100 square miles.

Can't we turn the P&L into a Catholic Church or some other sort of money-making operation?

Spoken like someone who doesn't realize Obama was the darling of Wall Street, 3:46.

445 we are talking about how dem run cities are crime ridden and poorly managed by race baiters and hucksters who have no care for the people.

How does the fed make dem run cities shitholes and not republican run cities? me thinks it's the dem.s running the cities that cause the problems.

^^^Thats why you shouldn’t think dummy, you don’t do it well. Maybe that’s why you’re here on A Friday night all alone? Again. Go inject some bleach why don’t you?

620 Thanks for keeping me company Fren.

Hahaha you partisan fool. Of course Obama did the same. How the Fuck does that mean Trump is not just another Obama????

But that was years ago. Supposedly Trump was going to drain the swamp, but he's bathing in it.

7:21 part of the swamp should get drained when the Durham report comes out. Unless of course some major money is turned over to the right hands, that’s really how these life long politicians stay permanently attached to their jobs. This is the biggest part that needs to be drained. Trump has been under fire since day one because these deep state animals don’t want to leave and then get people taken out, one way or another.

Aerosmith song of the DAY LIVING ON THE EDGE.

There's a very long list of subsidized "commercial" operations in KCMO where the public, and maybe even the electeds who did the deal, have no real idea of how much of the financial shortfalls the taxpayers are on the hook for when the operations aren't producing the cash to pay the debt.
Like Warren Buffet says, "You can't tell who's been swimming naked until the tide goes out".
Standby for smiley selfies Lucas deer in the headlights look.

Looks like the Houhilan reasturants group sold at the Right Time. And the Royals new Ownership came in at a bad time look at the lost revenue. How long can the Royals go without playing Can they fill up the K.

It's one thing to get hoodwinked into the overly optimistic hype of the Power & Light District initial plans from some professional development hucksters out of Baltimore....but City Hall kept coming back to Cordish again, and again, and again. Like a battered woman who stays in an abusive relationship until she ultimately gets killed.

When some on the Council questioned why the City was continuing to do business with Cordish, paying for their Light Tower garages, etc., then City Manager Troy Schulte said the City was obligated to stick with the gentleman's agreement from years prior. Chickenshit and no balls. Schulte got his big raise and contract extension, when everyone else at City Hall was under a freeze.

Review the campaign contributions which the Cordish Company and individual family members heaped on Sylvester James during his 8 years. Then you also have the local lackeys like Jon Stephens (now at Port KC) who started as the "Cordish boy" managing the P&L District.

You also have local media who provide cover for these corrupt individuals and give them a public platform to lie to taxpayers. Most of the media "personalities" don't reside in KCMO, so the fiscal mismanagement and corruption is something that doesn't directly impact them.

Say, where do you guys think that KC is gonna try and make up the 10s of millions of lost tax revenue from businesses being shut down?

Homeowners, prepare for an assraping the likes of which you've never seen before.

Chimpy is suicidal! Who gave the monkey a mirror to talk into?

Jon Stephens was the worst of the Cordish lackeys. Who/what did he have to do to get the Port Authority gig?

Yet under the same federal structure republican ran cities prosper. Always someone else's fault with you fuckers!

I guarantee that the scum from city hall will still demand their 1% earnings tax, the go bond taxes, and their criminally illegal property taxes imposed on ordinary citizens even though there were massive layoffs. And even Though Trump has nothing to do with it and the fact that he proposed a tax decrease for workers that democrats opposed, idiots like you will still vote democrat.