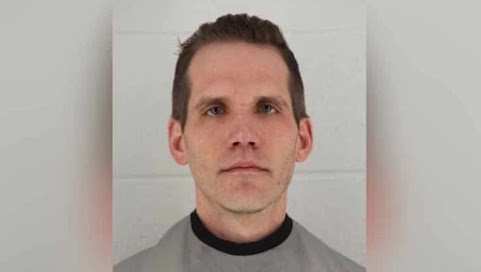 Here's an important fact check to so much local chatter about crime in Overland Park.

DESPITE RACIST STEREOTYPES IT'S SUSPECTED THAT THE DUDE KILLED IN A SHOOTOUT WITH AN OVERLAND PARK POLICE OFFICER WAS A WHITE GUY WITH TWINKLE TOES WHO HAD A HISTORY OF RUN-INS WITH PO-PO & VIOLENCE!!!

The suspect look is important if only because constant talk of demographic shifts after the tragedy doesn't apply to this horrific and historic incident of violence against law enforcement. Translation: So many people suspected a person of color involved in this tragic deadly crime and they were wrong.

Here's a hint at the story and name confirmation for anybody who can actually do research on the Internets  . . .

I guess they can't kill him twice.

Fact is that "demographics" are in fact shifting in Overland Park and there is an uptick in crime. Those are facts and TKC doesn't deny them. But people need to be accurate. This is the first killing of a police officer since 1985 and the fact that was some loser white guy is important.


assumed it was a White dude-- blacks can't shoot straight.

Guy sounds like a total nutcase.
Has a rap sheet a yard long. Burglary in Lawrence, etc.
Had a rich "backer" who posts his bail.
Even his parents wanted him locked up.

He will be gone for good this time.

He's just wired wrong. You can usually tell by the face.

welcome to the new overland park.

Oh yeah, and a scumbag.

He was just getting his life together.

A white guy killer Deanna Rose back in what 1985? Thats why I always carry a Glock 29, and dont really trust looks - they are so deceiving. Some of the kindest people I know are not white. I am White

It’s probably been since 1985 when the last white guy murdered somebody!

Paul Morrison (former JOCO prosecutor) was this guy's criminal defense attorney in a recent case - according to the JOCO court online case records. So our former Prosecutor helped a guy who killed a O.P. Cop! A messed up world! Why would someone go from prosecutor to getting criminals off the hook by helping them??

one less to worry about

What a fucking moron you are.

Tony may be alluding to the fact that yesterday his Nazi scum commenters were lying that a black man was the reported killer.

What I want to know is why do hot dogs come in packages of twelve -- when I can only fit seven of them up my ass ?!

HE'S WHITE...SURPRISE. SURPRISE. Not really. What else is new. Hit and run? Shot the police? Toxic, entitled White Male from Johnson County no shocker there. Millions more where he came from.

Yet, nearly all mass shooters are White. Weird.

Phillip Michael Carney was a dance instructor at Camelot Ballroom in OP as recently as Summer 2019. Got great pics of their website showing him teaching a Tango class on May 30, 2019. Also checkout their facebook showing him dancing with Maria Duggendorf -- made sure to get a vid of that also. I'm sure both with disappear from their site soon -- so check it out, campers. You can also see he's done jail time for all kinds of things -- nothing like hiring a convicted felon. Wonder what Maria thinks now? Did anyone else dance with this cop killer? Ahhh...the magic of the internet. Nothing can be hidden.

Damn! I knew this guy before he was an addict. His family was a bunch of cops too. He was a legit dude until drugs and Alcohol took over his life. What a heart breaker for his family to know your son brother and nephew did something like this. Terrible. My heart goes out to his family as they live with this. What a tragedy for all involved.

you cannot be serious.

That is one light skinned black dude right there!

White men-the most dangerous animals on the planet. if they are not enacting genocide on a global scale, they're fucking children, or committing domestic terrorism. Where is that guy's parents? When is the white race going to take responsibility for all of their misdeeds?

^^ Most whites don't go out much anymore. Scared of the Annual very high murder rate of those that are not White. You know , same guys selling dope to your son and hosing your daughters. Non white of course. Please watch the News reports on local crime before you type your stupid ignorance that everyone else knows.

^^and yet that white guy killed a cop! Weird!

Most mass shooter and serial killers are white males.

We still don't know who the bad guy is. An off duty cop claims to have seen a hit-and-run. Details please. Police report the officer followed the suspect and there was a confrontation. Why did the suspect stop? Was he forced to the curb or was his car too damaged to go on? Police say the officer was "in uniform". What uniform? Was it a blue shurt with epaulets and a badge or some more dressed-down attire? Did the officer manage the contact with the suspect in a careful and cautious manner? Who fired first? How many shots were fired? Where were the two victims struck by the bullets? Where did the bullets that missed end up?

We hear a lot about the psychopathology of the civilian but not much about the service record of the cop. Was he prone to escalating encounters? Were there past brutality charges?

White people are slightly less likely to be mass murders and serial killers than minorities in America. It seems like most of them are white because most people in America are white, but the % of white's that commit these crimes is a little bit below the percentage that whites represent in the population. White people are way way less likely to commit murders in general and minorities are way over represented in the overall murder stats.