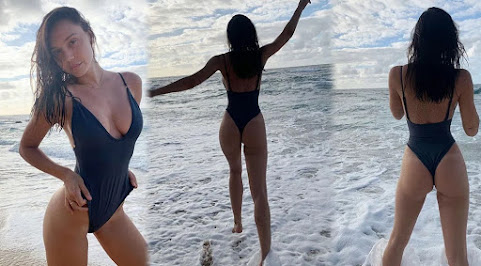 KANSAS CITY, Mo. - Kansas City Firefighters quickly put out a fire near East 68th Street and Cleveland Avenue overnight. KCFD was called to the home around 1:15 a.m. No injuries have been reported. The cause of the fire remains under investigation.

The Lee's Summit-based National Benefits Center will hold off on laying off 1,000 employees, which was set to happen Friday. Congress is trying to find funding for the federal agency, which operates under the U.S. Citizenship and Immigration Service, The Kansas City Star reports. The USCIS is set to run out of money this summer.

Leavenworth, KS - An active-duty soldier stationed at Fort Leavenworth stopped a gunman Wednesday morning on Centennial Bridge in Leavenworth by running over him with a car. Leavenworth police chief Patrick Kitchens says a man was randomly firing at passing vehicles with a handgun and a semi-automatic rifle.

Proceed with caution. Alexis Ren plans to tread carefully in her next relationship following her split from Noah Centineo. Celebrity Splits of 2020 The model, 23, explained in an interview with published on Thursday, May 14, that she found it difficult for her love life to be in the public eye.

"We get done shooting, and Matthew said, 'Did you point to the cookie jar and say look at the time?'" So, as someone who was born in the same year as Friends began, and therefore spent a lot of my childhood watching it, when Lisa appeared on Jimmy Kimmel Live on Tuesday from her home office, there was one thing I noticed immediately in the background.

Videos shared on social media show people looting a Target store in Minneapolis amid protests against the death of George Floyd, who died after a police officer knelt on his neck. The videos show overturned shopping carts, empty shelves, and people hauling away televisions and other expensive goods.

Facebook CEO Mark Zuckerberg has called out Twitter for attaching a fact check to a tweet from President Trump, telling Fox News' Dana Perino that privately-owned digital platforms should not act as the "arbiter of truth." "We have a different policy than, I think, Twitter on this," Zuckerberg told "The Daily Briefing" in an interview scheduled to air in full on Thursday.

More than 40 million Americans have filed for first-time unemployment benefits since the coronavirus pandemic forced the US economy to shut down in March. One in four American workers has filed for unemployment insurance.


Trump offers to mediate "raging" standoff between China and India - what's it all about?

New Delhi - President Donald Trump has offered to mediate as China and India move of troops to their shared Himalayan border, raising military tension between the two Asian giants in a long-time territorial dispute.

EPIC Rescue In The Dotte


'I'm under here!' KCK boy trapped under Jeep in his bedroom after drunk driver plows into home

KANSAS CITY, Kan. - A nine-year-old boy was trapped under a Jeep in his own bedroom after who police say was a drunk driver plowed into his home. It happened at 2 a.m. Tuesday at South 52nd and Hagemann streets. It took the KCK Fire Rescue Squad over an hour to free the child.


Could the Chiefs offense keep getting better?

It's no secret that the Kansas City Chiefs are an offensive team. Head coach Andy Reid and general manager Brett Veach have assembled an all-star lineup featuring arguably the league's top quarterback, wide receiver and tight end - along with the league's top right tackle - that has been terrorizing opposing defenses.


Rain and storms are likely today through the morning and afternoon

Facebook came out of this better, even if they still ban regular people more than celebrities or politicians.

Out of Silicon Valley’s libertarian ethos came the myths that information “wants to be free” and that the Internet is fueling a cooperative new utopianism.

So glad to see that the looter is wearing a mask.
I was concerned for his safety.


People don't give a damn about the death of this guy it just gives them an excuse to steal and cause damage. That's a proven fact! Oh and blame Beyonce she started this when she killed the unarmed police in TX. Don't expect this to get any better it won't. Want solutions go talk to Beyonce...again it's her fault!

Silicon Valley had a “libertarian ethos” in the ‘80s, ‘90s, and maybe early 2000s. That has been replaced with a full on, hard left, CCCP embracing, Marxist/Globalist ethos that came growling to the fore after the election of the bad orange man. Libertarians are not welcome in Silicom Valley anymore.

Does this mean that Zuckerberg is now a Hero to the Trump Supporters?
Or are we now, and always have been, at war with EastAsia?

Why is the guy stealing the whole mannequin? Wouldn't it be easier to just take the clothes off of it.

I'm not saying Target deserved to be looted but let's get the full story before we rush to any judgement here.

^^ What? You need to get the whole story behind why a Target was looted? Think long about it. I'm sure you'll come up with something simp.

Lairs who have the ability to influence millions don't want their lies to be fact checked. The president shouldn't be able to lie to the American people 2 to 3 times a day.

Target has lately supported every virtue signaling liberal cause out there, including male trannies in girls’ changing rooms. This is delicious karma.

All this bullshit going on and Captain dipshit just want's to make sure he can lie to the people. Worst POTUS ever.