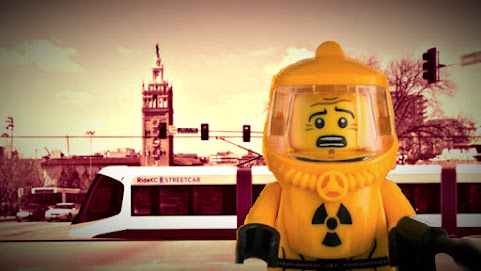 Kansas City's biggest transit gamble in more than a century has been DECIMATED by the pandemic as riders abandoned the mode of transit and service was dramatically cut back. 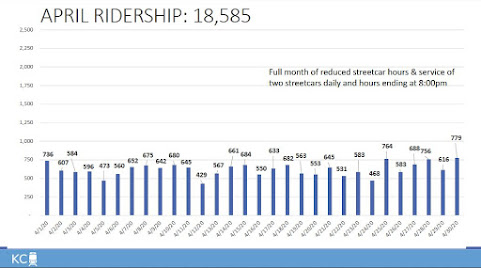 Compare this to last year's numbers: 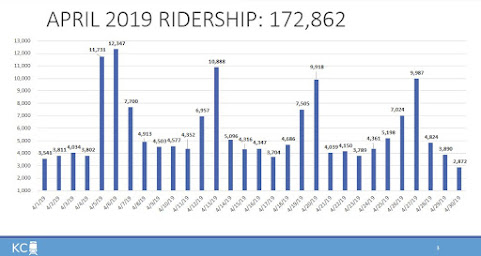 Sure, eventually, when/if there's a vaccine, things might return to normal.

But here's a counter argument:

The pandemic may forever change the world’s cities

"The pandemic’s impact on urban life will be vast and far-reaching. UNESCO, the U.N. cultural agency, warned Tuesday that the pandemic may kill 1 in 8 of the world’s museums. Myriad local retailers and businesses that in part help cities distinguish themselves from suburban areas more beholden to corporate chains face extinction. A recent survey in the United States found that 70 percent of smaller restaurants don’t expect to reopen should the coronavirus crisis last more than four months. Hundreds of American towns and cities plan on cutting public services in the coming year as tax revenue plummets."

And so, given the dire economic situation for cities like KCMO in the future . . . Spending MILLIONS to expand this sketchy mode of transit might not be financially viable.

it wasn't financially viable to start with. The streetcar has always been a ripoff.

That's why the first one shut down.

Yet it just got 7 million worth of city hall funding during the pandemic shut down. Weird.

Hmmm, did the ridership plunge, or, did they start using the real numbers.

A train dependent on open businesses is always going to be less viable to a train that really moved people to work, airport and major venues. The idea of build it and they will come is not a good business strategy.

12:52 and if the cost is 700,000 to create poorly thought out bike lanes by 'activists' on armour blvd is any indication, $7 million ain't worth much.

Breaking news!! During a city shutdown, transit rides are down. Wow. Thanks for that.

How will they ever replace the lost revenue?!?!

Oh yeah, they don't charge passengers and don't collect fares from riders. With the reduced schedule and fewer trips, they are actually losing less money now. But don't let that get in the way of "the sky is falling" narrative.

The (fake) pandemic will change cities forever? Don't think so. Listen to the GOP. Quit being pussies and get back to living your regular lives. Open it up, get out again, and ride the train. Freeedumb.

It's never been a form of transportation that people took to get to work or anywhere useful. It never will be, even when it runs to UMKC.

It was full over the weekend.

Thing is only full for the bar crowd.

It's as scam, always has been.


This will only change cities if you let it. Don't let them do this.

Well at least we have the free bus to pay for too.

The Downtown Lawyers have even stopped using it to go to lunch.

Non-Franchise, small owner restaurants will still exist. Their owners will declare bankruptcy and then start over again when the COVID-19 scare goes away and we return to some normalcy for a year or two.

EVERYONE IS MOVING OUT OF THESE GHETTO DUMP LIBERAL RUN CITIES

OH I FORGOT AND MURDERS

The train goes back and forth a relatively short distance. The "passengers" are homeless individuals. Same issue with the buses. The individuals with somewhere to go will use other modes of transportation to avoid the homeless people.