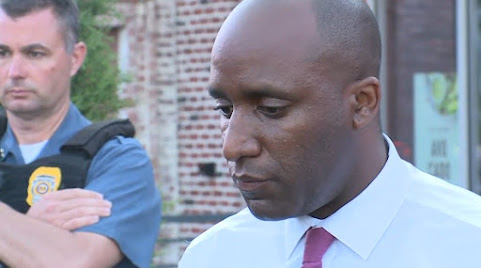 Once again it seems the KCMO mayor might have spoken too soon . . .

"But during an 8 p.m. press conference, the mayor and Kansas City Police Capt. David Jackson said if protesters remained peaceful, as they had for most of the day, they wouldn’t remove anyone right away.

"But not even an hour later, some protesters threw water bottles at police, and officers donned their gas masks.

You cannot reason with maniacs, Boy Blunder. Learn a lesson.

Hey Mayor! Pull your head out!

Once you stop supporting KCPD as #1, you are rooting for anarchy.
Law enforcement is the only thing separating civil society from chaos.
If Lucas isn't going to FIRMLY stand behind a KCPD strictly enforcing the rule of law, then it's going to be a free-for-all with citizens arming themselves and taking matters into their own hands.

It will take decades for Kansas City to recover its Economy. Why would you want to Visit a Crime ridden City Or do Business in a Violent setting. And Continuing Violent protest In a High Value property Setting. Homes Worth Hundreds of thousands of Dollars Within a Few Blocks of never ending protest .

Black Mayor, Black city...who knew they ran out of bananas.

I used be a very tolerate person with a very liberal bent. When the black movement keeps giving sainthood to criminals when those individuals eventually have bad outcomes with the police, I grow weary of the movement. My tolerance has turned from a period of just questioning to a period of being critical to now a mindset bordering on racism.

I pray I don't get pushed that far. I would guess there is a lot of other people with this same dilemma either consciously or unconsciously. I ask the black community to give me hope that your leadership will insist on perspective and reason to quell the emotional mob response that routinely follows these unfortunate tragedies of criminal and police encounters.


It's a fact that Quinton Lucas was on the Plaza helping the rioters he was seen!

But the star editorial board and Dirty Marge said the protests were peaceful.
Alternative facts by the star....again.

^^who reads the Star? Jesus Christ, you must be old as shit! Go into the light Boomer!