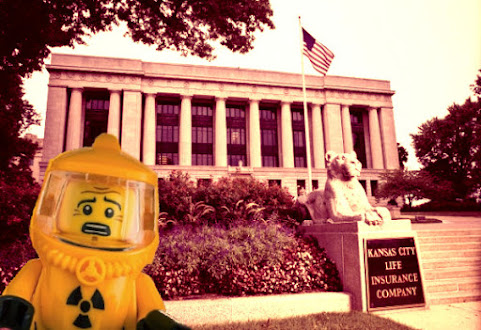 The iconic midtown Kansas City Life Insurance Company building has long been a symbol of financial stability and now the biz has suffered a historic setback along with the rest of this town, the nation and the world.

Here's the damage and how the company is dealing with it:

A terrifying bit of foreshadowing from the report:

"The insurer says has already increased the allowance for mortgage loan losses."

"The Kansas City, Missouri-based life insurer is reporting $150,000 in net income for the quarter on $123 million in revenue, compared with $4 million in net income on $130 million for the first quarter of 2019."

As Kansas City starts the "soft" reopen there are many theories about economic recovery but almost nobody believes an immediate bounce back is imminent. Instead, the restart looks increasingly complicated, uncertain and not only tied to public health but also increasingly hostile and unproductive partisan bickering.

CNBC: Putting the economy back together again: What the future holds for Americans

BBC: Could the huge shifts in our way of life being introduced as part of the fight against Covid-19 pave the way for a more humane economy?

Vox: Why the Covid-19 economy is particularly devastating to millennials, in 14 charts

I got the solution, just wait on a loan from Frank White or Quinton Lucas. They'll hand over that stimulus money right quick. Even better, you might get one of those affordable housing units in a new luxury condo. It's all about momentum baby. Think about it.

Another great company from long ago. They used to be something, not anymore.

KC Life might be a bellwether but they aren't the the only one. Look at any big business around KC. They're not hiring and they're not buying. It'll take a lot to give people confidence again and it's not going to happen any time soon. The rubes with guns marching to get the Kung Fu Flu aren't very good market makers. Unless you're talking about encouraging people to stay home.

Get an essential job said...

People with essential jobs never stopped working. However I do feel sorry for teachers and other service industry workers in this situation who were not allowed to earn a living.

I'm going to prosper and some day own a super mega yacht! It is totally possible to profit off the misery of others!

The stage and momentum was set for this crash when Obama took over idiot.

Haha you are so right that Trump and his twats are still blaming Obama 3 years gone.

Trump had the economy rocking and rolling after Obama made fun of Trump for even thinking much manufacturing could come back to America. The difference between Trump and Obama is that one had a positive, get-it-done attitude and one had a negative, it's-impossible-to-do attitude. Glass half-full compared to glass half-empty men. Give me the positive thinker as a leader any day of the week. Many people, including women and minorities, were thriving based on the jobs data under Trump before COVID-19 hit. If anyone can bring us back to economic growth because of his perseverance, it's Trump. That's why this Independent voter (regrettably voted for Obama) is voting for Trump in 2020.

great work Q, we luv you from Xi and the bankers, bankruptcy attys

7:52 - C'mon man. Everything had been trending this way for Trump until he decided to ignore his Intelligence Community and their advice on COVID 19.

If we had any semblance of an adult in the WH, the impacts from this virus could have been mitigated. Now, we're at 16% unemployment. You should ask those additional 10-12% unemployed how their pocket books are.

Throwing out a travel ban with more holes than swiss cheese and then carrying on as if nothing's wrong is not mitigating.

This reminds me of AMERICO LIFE INC.

Remember that Sly James' no-bid single terminal airport project would have given the billion-dollar (+) job to Burns and McDonnell and Americo.

Americo has an "F" rating from the Better Business Bureau.

KC Life should reverse tax KC and sue to get back money paid.

Someone send up a GoFund Me to aid lawyers to wipe 10-10-10 off the face of the city.
Archer is complicit in helping Lucas’ nationally risky ridiculed plan.

Send the dunce caps to city hall and play the clown song.

7:16, let me help you with that. "People with essential jobs and federal employees never stopped working."

Maybe Kansas City Life had a lot if corona virus and hood rat policy holders and had to pay out the life insurance benefits due to all of the deaths.

Why is Kansas. City Life Insurance in the mortgage business?

Is that legal? To use policyholder funds for mortgage loans?

Life Insurance policies are a racket unless it is a term policy while your kids are young.

Taking the Dow Jones Industrial average as a rough indicator of the Economy...

Trump took Office with the DJI at 19,827 - to even equal Obama's performance Trump would have needed an increase of 93% (31% times 3 years), or a DJI of 38,266, but the highest it’s ever been during his term in Office was 29,569! At his very best, Trump averages roughly 16% economic growth, barely HALF of what Obama accomplished!

Of course, with Trump's magnificent performance the past two months, the Market has voted "Oh hell no!", and as I write this, the Dow is at $23,825, bringing Trump's "Greatest Economy ever" performance down to well under half of Obama's, but I used his best performance to date and ignored the fact that Obama's first two years in Office were spent turning the Economy around after Bush Two's "Deprecession", and therefore his performance should have been more accurately calculated over six years rather than eight.

In other words, minimizing Obama's performance and maximizing Trumps. Trump has managed to do a little better than half what Obama did.

Do the research and math for yourselves, numbers don't lie, but mythmakers (and posters on TKC) certainly do!

^^^ 11:23...FAKE NEWS.. if it was so good under Obama how come his own employment was around seven and a half percent at its lowest? Anybody can go to a liberal rag site cut and paste what you just did. Where did you get your fax at?

You wanted a reality show host for President.

Well, now you're on Survivor.

@11:36AM-and now the unemployment rate under Trump is 20%!!!! Thanks Trump. Worse than the great depression!

11:05, I suspect they are invested in mortgage backed securities, among many other types of investments. They do not write original mortgage loans.

I'm going to work hard, not seek pity or blame others and someday own a mega yacht. Said a liberal, ever! There I fixed it for you.

You're right Trump supporters are survivors and always will be. They will survive no matter who is in office. Thanks for the wish of luck, but it might be you and your friends that really need. Good luck!

Enjoy your talking point while it lasts. The economy will come roaring back soon and your dream situation will be over. Be safe!

As I suggested, do your own research and calculations, then come back with your results. Anyone can do it, all it requires is addition, subtraction and the ability to calculate percentages. Those skills are usually taught by the eighth Grade.

Research this for yourself also, or if you choose get two friends and sit in a row, covering eyes, ears and mouths with your hands.
You know "See no reality, hear no reality, speak no reality."

"I don't ever give anyone Hell,
I just tell the truth,
and they think it's Hell!"
Harry S Truman

^^^ Why is this our "dream situation"? You really fucking think citizens of this country wanted this to get rid of Trump? I fucking hate the guy and I sure as shit don't. My fear was something like this would happen and his ineptitude would put us here, and well, I, and many others who had this fear are correct.

Yeah, I was hoping I'd lose 40% of my 401k, would have to worry about my company choosing to lay people off because our client's can't pay us now. You got me man. You got me.

I don't know if you dipshits know how Insurance works but let me break it down for you. Insurance companies take your premiums and some go into reserve to fulfill claims and some goes into investments. Mortgages, are generally pretty solid investments unless you elect a dipshit who ignores a pending pandemic that puts millions out of work so they can't pay said mortgages. Oh, and when the President ignores that pandemic and the market crashes, the other money that was invested by insurance companies takes a nice hit too. Make sense?

Insurance companies are supposed to be invested in highly rated government and corporate bonds.

is it all lost?

1:56, properly rated mortgage backed securities are as safe as most other equity investments.

Around 8% to 10% of life insurer investments may be used to purchase equities or any other kind of investment that is not a t bill or corporate bond. It's called a basket clause.

To be fair, most of the problem with the 2008 financial crisis revolved around individuals getting loans they had no business getting. Not to mention they were ARMs and when the adjustable rate teaser period was over, people couldn't refinance because the house values had gone down then owners were forced into high interest loans. Then, they default. Then, those holding the securities take a bath.

I remember buying my first house and re-financing to a 5 year arm. It wasn't an exorbitant house and I figured I'd probably look to move and upgrade in 5 years. It worked out for me.

The weakness in @3:22 is the phrase "properly rated mortgage backed securities"!
How does one go about getting them "properly Rat"?
Both Moody's and Standard & Poor's ratings were totally discredited by the actions those "services" took during the lead-up to the 2008 Financial Collapse, both companies admitting during Congressional Hearings that they granted ratings without performing a thorough examination of the Derivative Instruments they were rating.

But o penalties or disciplinary action was taken against either of them, and the Financial Organizations still selling those derivatives are still using them to "rate" the same instruments.

Hell they both granted "Triple A" ratings to Morgan Stanley REITS that contained less than 5% "Aa" rated Mortgages as their best asset!

Lets just all pretend there isnt a deadly virus out there, and go back to living normally, if it kills ya then it does, if it doesnt then your landlord who might have already died from it his/her estate gets paid, lets just be the dumb asses we all Americans are and get back to work, and continue to pretend we have a purpose here that is non-replaceable. Isn't life grand!!