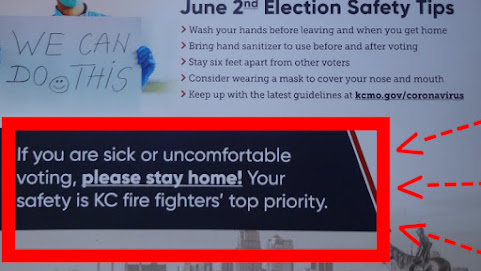 There has been very little news coverage of a proposed Kansas City sales tax increase that will spike the local cost of living during a pandemic economic crisis.

This cowtown's so-called paper of record is far too busy writing a series of scathing editorials attacking Missouri Guv Parson who is facing a strong challenge from Auditor Nicole Galloway.

And that has inspired this latest screed from the local rag . . .

We don’t know that we’ve ever heard anyone who purports to care about democracy say that, nor would we expect to. Parson’s message that we should bail on voting rather than risking our health is especially outrageous because in Missouri, it’s his party that’s determined to force people to choose between staying safe and doing their duty as a citizen.

Accordingly and echoing the statements of the Governor . . .

IN THEIR LATEST MAILER, KCFD WARNS THAT SICK AND "UNCOMFORTABLE" VOTERS SHOULD STAY HOME!!!

Given that this is a typically low turnout election and there's still coronavirus risk, that's not bad advice but the tactics from local union leaders clearly hasn't elicited the same kind of rage confronting the Republican governor.

Take a look at the hype delivered to tens of thousands of mailboxes across KCMO . . . 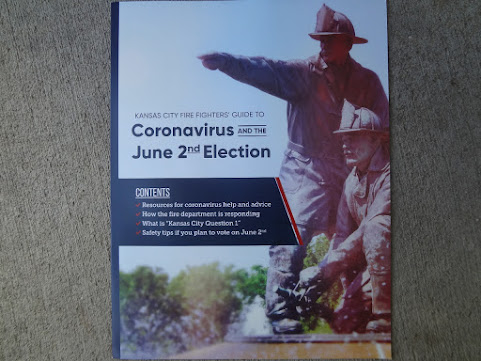 This is a pricey fold-out piece, the kind that funds the vast majority of local political consultants . . . 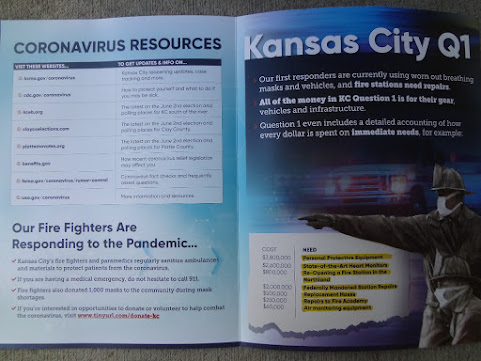 The back of the mailer seems cute enough but includes a bit of scary language . . . 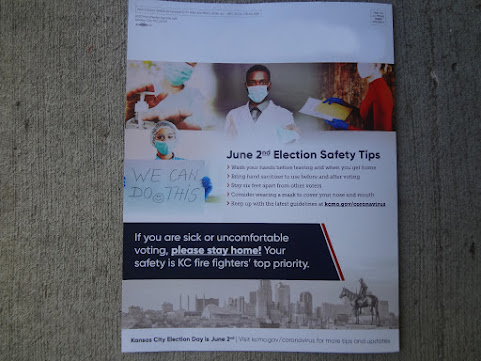 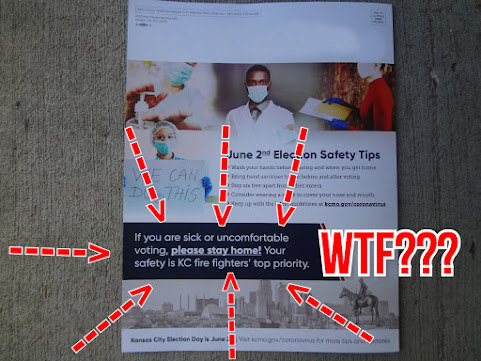 And so, whilst the newspaper and local Democratic activists are quick to call out the Republican governor in Jeff City . . . We haven't seen a peep about THE VERY SAME TACTIC USED BY FIREFIGHTERS confronting Kansas City voters.

The Star has always been hypocritical.

Actually, since the "election" is in KCMO, the flyer should have suggested that "if you realize that your vote really doesn't count" feel free to stay home.
It just goes on and on.

Firefighters have no control over voting, Republican politicians do thats why

This a democrat city, so this tax increase is going to pass.

The whole reason to have the vote now during the “crisis” is less people voting no. They already cut down on the amount of places you can vote at guaranteeing an even lower no count. 2000 fire dept. employees and their families will show up because fire is giving them ppe to wear while they vote, people are gonna see that and turn tail.

Earnings Tax collections are kept behind a KCMO firewall to prevent the public from viewing the data. Would you be angry to discover that certain businesses are given a pass when it comes to paying their fair share of the Earnings Tax?

i have a lot of respect for the builders and craftspeople of the 16th century.

You clods are going to vote to fork over more money to these greedy KCFD slobs aren't you?

Of course you are, you always do.