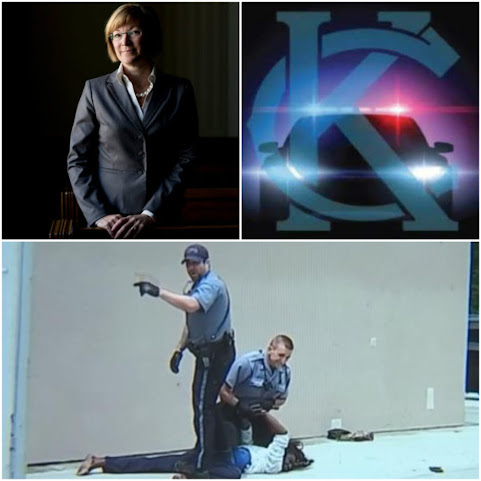 The transgender woman at the center of this case was gunned down last year in a string of unsolved murders impacting vulnerable urban communities. So, none of the bickering is gonna help her very much.

THE GRUDGE MATCH BETWIXT THE JACKSON COUNTY PROSECUTOR'S OFFICE AND THE KCPD THREATENS TO UNDERMINE RESPECT FOR LOCAL AUTHORITIES WHO CLEARLY CAN'T PLAY NICE TOGETHER!!!

By far, KSHB offers the best journalism on this topic in the metro and their report might be the most important non-plague related story we've seen in 2020 . . . Hare are the basics . . .

“I’ve been told that all future probable cause statements may be withheld in officer-involved incidents investigated by your department,” Peters Baker wrote in the letter to KCPD Chief Smith. “By withholding a probable cause statement for an officer-involved incident, you are blocking the prosecutor’s independent review of the facts under the law.”

The response was swift and strong . . .

Fraternal Order of Police Lodge No. 99 President Brad Lemon fired back Friday in a statement that takes exception to “the unjustified misdemeanor charges” filed against Brummett and Prichard, who he called “exemplary officers.”

Lemon accused Peters Baker of “a politically motivated prosecution” and said the Fraternal Order of Police is “astonished that while crime continues to plague our city,” the prosecutor's office “would rather secretly conduct grand jury proceedings to charge officers for doing their jobs.”

“Instead of focusing her efforts on helping officers combat crime that continues to destroy Kansas City families, she seeks to score cheap political points,” Lemon said.

And again, the transgender woman who endured the rough arrest after throwing around a slew of anti-Asian slurgs was killed in a homicide not too long after the debacle.

Accordingly, neither police, the prosecutor's office nor so many social justice activists & pundits weighing in on this topic seem to be making any progress in reducing the Kansas City murder count.

I guess we can't all get along.

Under statement to be sure.

A lot of this seems like a campaign season posturing from both sides.

Thanks for nothing that the woman who was arrested is dead. Didn't know that before, not really obvious from some of the other stories. The newspaper seems like she was somewhere crying her eyes out. This story is a classic kc cluster. Nobody wins.

I guess politics is more important in kc.

Smacking head on the sidewalk is a little known therapy for tranny mental illness.

Peters is a real slimeball politician.

Peters is a terrible prosecutor barely deserving of the name. She has taken actions that have set criminals loose to roam the streets and is one of the reasons why our crime is as bad as it is. Criminals have nothing to fear from this grifter, whose prosecutorial zeal has suddenly awakened to take advantage of a situation to better accomplish her only real passion--to stay in a lucrative public job where she is wholly unaccountable. If only she cared about going after criminals as much as she cared about going after police.

Not surprising or even unusual in the cesspool of local politics.

It is the negroes that continue to "plague our city."

And keep in mind we eventually got rid of the plague.

Jean Petersucker Baker is the worst failure at her job than any person I have seen in my lifetime. She has failed worse than anyone, in any job ever.

After all the stuff going on with the pandemic, Peters Baker is only concerned with her career and no one else. She is following the page from McCaskill's book trying to make a name for her liberal base to go after cops trying to do their job. Pathetic! She wouldn't touch prosecution for any other similar situation if it wasn't the police. Cops need to be held accountable, but I can see through this smoke and mirrors.

I always cooperate, the best i can, with prosecutors, police, & nuclear families West of the mississippi.

More fun tho with Nazi scum.

Cops need to be held accountable...
But I don't like the DA's politics...
So it's ok to cops to bang a handcuffed person's face into concrete...

This will continue until the Police Board is made up of citizens actually from the inner city not political cronies, a citizen internal affairs unit is developed for department oversight, and the racist Chief retires. Citizens are only going to put up with so much abuse before a few officers get shot.We are about due for a KCPD funeral.

Fuck Petersucker and her probation giving ways, she’s all about forgiveness to the kolored murderers but let some white people do something slightly wrong and boy she’s fired up for the death chamber. Stupid cunt.

There is no such thing as a transgender woman. There is a man who was a sex pervert, a man dressing up like a woman, who was a criminal who got what he had coming to him. Well done, police! And the rest of you, stop defending sickos.

When a police officer gives you an order, when detaining or arresting you, you better follow the order and not resist. It is absolutely amazing the number of people who apparently believe they can resist without escalating the situation to their own detriment.

Jean Peters Baker is perfectly willing to throw the KCPD under the bus in order to score political points with the Social Justice Warrior crowd. As leader of the Missouri Democratic Party and an aspiring state-level officeholder, Baker has glaring conflicts of interest. She should resign.

“Aspiring?” Why exactly did you give her that much credibility? She has none, well, with the murderous blacks she does

If you watch the video , you Will see that the he/she smashed its head into the sidewalk twice. The officer would have grab the hair to make a head move like that. Case closed.

Charge the commanders and investigators with hindering prosecution.


"When a police officer gives you an order, when detaining or arresting you, you better follow the order and not resist. It is absolutely amazing the number of people who apparently believe they can resist without escalating the situation to their own detriment."
That is true.

^^^dumb ass it took two officers to beat the person? Really, the resistance was that much too overcome? FOH

The job of the police is NOT to criminalize and kill people carte blanche. The job of the media is NOT to call people women when they are in fact, male. There is so much wrong with the reporting of this story that it gets lost in the lies and spin. The prosecutor charged the officers with only a misdemeanor instead of a real crime of homicide. Both parties are full of shit. Because if the average Joe was at fault, he’d be charged with murder. Instead the reduced charges likely will result in a slap on the wrist. The job of the police has never been to kill people at will. Fraternal Order Lemon doesn’t know his own job.

9:13 Thanks for the amusement. Inner city police board. That's funny. Uh, wait a minute, you were joking weren't you?

3:10 the police arrested the person who killed Hill. what article did you think u read?

I do not believe police ever willfully admit anything about amything, but if i go apeshit i am not surprised if i get tackled and bruised even when i do not resist.

neither does my family.

altho i do have a list of items i can bitch about to the police.

i have a bigger list for prosecutors, judges, & politicians.

^^^ I’m glad they do, if you get shot by the cops then you deserved it, death is even better. It’s the only way to get justice with Petersucker as prosecutor, that dumb bitch let’s murderers off with probation only for them to kill again. Biggest piece of shit on planet earth she is.

If you are criminal, you just need to get the right lawyer...one the prosecutor deals with. You know what I mean? "Deals" with. Of course, those lawyers cost big bucks...if you want to play, you got to pay.

Congrats. It's clear you graduated top of your class at Idiot School. Hope you're enjoying higher education at McDonald's University. Flip those fries!

a probable cause statement wasn't sent b/c THERE WAS NOT PROBABLE CAUSE! JPB knows this but is playing on the ignorance of her audience. The FBI also looked at it and said no thanks. If you slow down the video and watch it you can clearly see that the "women" in question is slamming her own head into the concrete. furthermore, "she" never filed a complaint nor did "she" ever seek any medical treatment.

The he/she was a prostitute. Was probably killed when the John, got the pickle suprise!

What in the Holy fuck are you talking about? It didn't die because of the fight with police. It was murdered later by someone else.

Peters-baker needs to go. She is a huge part of the problem.

Let the police do their jobs and the homicide rate would drop by 50%.

Cops face wacked out meth heads, murderers and other low-life every day.

The police have as much right to protect themselves as anyone and if you don't want your face saying hello to a concrete sidewalk don't do the crime.

Perhaps the police should keep track of how many times they have to re-arrest perps the county let's out.

I agree with police they give you an order you follow. Lately folks thinks this mean run and disobey.