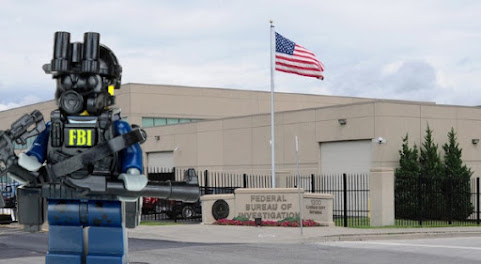 In 2025, the lease is up on the FBI building at the apex of the Westside & Downtown Kansas City.

Most development types have known this sine the 90s.

However, a former Kansas City Star scribe offers this helpful bit of news that MIGHT benefit some struggling local developers who haven't found many new takers since the start of the pandemic . . .

Hard journalistic evidence that speaks to decades of training at this town's paper-of-record:

"Sources say the FBI is the tenant being sought for the project. Officials with the GSA, FBI and Metro North Crossing all declined to comment."

We noted this non-story if only to offer a glimpse at rough life for local "journalists" pitching garbage on behalf of desperate developers AND to provide a hint that government contracts remain this best hustle for everybody after the pandemic.

Metro north mall is very nice. They can buy their suits at Macy's! It's still standing.

Downtown Kansas City even became too violent and dangerous for the G-Men.

Wow, 12th & Summit provides a great view of the west bottoms and the River too. Should be a prime real estate property purchase for the "perfect" buyer.

In the D.C. headquarters, during the Obama years, the fish rotted from the 7th floor on down!!!

Up the the street growing up there was a FBI guy that lived there with his wife and all, he had the classic dull black suit.

He fit the stereotype to a T.

it's prime real estate if they do move. Hopefully they'll leave behind some other law enforcement presence in order to keep the surrounding area safe.

Perfect location for a brand new heavily-subsidized convention hotel!
Call Wickam James!
Those 25+ Million tourists who have been chomping at the bit to see THE streetcar and other "only in KCMO" attractions need more "luxury" places to stay.
That's the way to address the fact that KCMO government is about broke and begging for help from the county, state, and feds.
Probably a Lucas TV press conference and another ponderously-important speech will do the trick!
Momentum!

There's soon going to be a lot of vacant downtown buildings.

I also heard the well to do’s on the west side wanted them out of their neighborhood.

Would make awesome site for Luxury Apartments. If anyone can afford those anymore.

Comes with a security fence and gaurd shack and private entrance, might even be bullet proof!

Funny but true. Why should government blow our money on fancy new buildings while so many perfectly good buildings are available? Besides if the FBI would stop ginning up entrapment terrorists they would need only half as much office space.