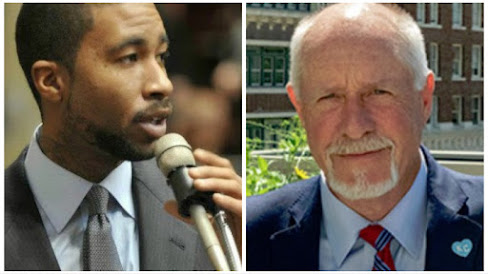 Tempers flared today at City Hall over a "small gesture" of 12th & Oak solidarity with victims of coronavirus and the ensuing economic impact of the lockdown.

A quick summary of the policy that sparked the debate . . .

"It was a resolution proposed by Councilman Kevin O’Neill, 1st District at-large, for council members to take pay cuts. Specifically, to allow them to forego pay raises — from $61,569 to $70,718 for members and from $123,516 to $141,455 for the mayor — which they received last summer. They would donate the balance back to the city as it deals with any economic downturn brought on by the spread of coronavirus. The proposal devolved into a yelling match between O’Neill and Councilman Brandon Ellington that Mayor Quinton Lucas struggled to quiet . . .

"If all the members and the mayor took advantage of the proposal for three months, the city would save about $31,930."

Still, that description is far too clinical and doesn't capture the spirit of the debate . . . Also, newsies purposely omitted the punchline and giggles following the discussion.

Thankfully, we captured video so that KICK-ASS TKC READERS can see for themselves . . .

What we notice . . . Councilman Ellington is absolutely correct and his criticism of both the lockdown contradictions and the superficial City Hall proposal is on point.

Meanwhile, Councilman O'Neill uses a classic political trick . . . Yelling and then quickly backing down when called on it.

Superficial is far too kind.

This was just silly.

Well I don't know about you, but $31,390 is a lot of money in my neighborhood. Whether or not this is a stunt is irrelevant. He's right they should take a cut. Those that say 'We all have to make make sacrifices' should you know, make sacrifices.

I'm sure Waddell & Reed could use another 30 grand. Time for council to put their money where their mouth is. In the back pocked of developers.

Damn, so the city pays these CLOWNS? Hell, I thought they paid the city. AMAZING!

"My job is to ARDICKULATE my point, brother. You ain't gonna talk over me, or disrespect me." -- Councilman Ellington

Drag his ass out!

The City Councilors aren't all independently wealthy. The money isn't superficial for some of the individuals. Ellington is one soapbox after another. And lately he is one conspiracy theory after another. The black community isn't benefiting from his "leadership" as of late. He needs to stop blaming white people for the faults of the black community. Yes black people can get AIDS. Yes black people can get COVID-19. Ellington needs to stop stating otherwise. The people he represents are dying and it isn't the fault of the white people...

WE need a SUPERHERO. We need BYRON.

Really, this is the professional city council elected. What politicians like Ellington should remember they are public servants who quite frankly are overpaid!! And before anyone including Ellington's minions start screaming in his defense. Politicians were never supposed to earn a living but as we've seen over the years they do. Look at Washington politicians in office for 25,30, 40 years and insurance paid, retirement. Public service, not live off the taxpayers dime and waste the taxpayers money on special interests

Agree. Ellington hasn't done anything for the people at the state or locally. Just collect a check. Tags on to everything including the food giveaway at a local church.

Yeah I'm AGAINST THE MAY 15TH, whatever the fuck that means.

In Sweden, they don't even have May 15th, they go straight to June and everything's fine.

Correct, by both sides.

The angry violent monkey that wants to get rid of aim4peace.

This city is fucked.

Ellington's reaction to donating his raise is very disappointing. He's just another greedy politician who only cares about himself.

Why would Ellington think he is worthy of any respect? He absolutely is not.

If Ellington thinks that is superficial, he can donate his entire salary. It isn't like he does anything worthwhile. He is completely worthless.

O Neill is a thinker. Ellington...He expects more compensation not less. O Neill realizes there are several City budgets which can get a hair cut for the betterment of the KCMO response to the Pandemic. Ellington's solution is to employ as many unqualified folks as possible and tax the folks who live on the west side of the city. Ellington and his kind are why there are so many Democrats who have left the party.

Does Ellington have an MBA from UMKC?